Well, we do.  But I think this one is mostly going to be catching up and getting ready for the next several weeks so I can go to Yosemite with a clean conscience.  (Where I think there'll be more snow than I'd expected, after the storm that just came in and dumped feet of snow everywhere, including on our local mountains.  Beverly - how's it going out there?)  The ever-growing to-do list does mean, though, that I'm probably not going to get the quiet day of just sitting and knitting and spinning that I'd dreamed of.  Ah, well.  Such is life, right?

I am making progress on the Leaving sweater, though.  I finished both fronts and the back and blocked them, and last night I finished the first sleeve.  That leaves one more sleeve then button bands and collar to go.  The sleeves can block while I knit the bands and collar, and with luck I'll have it done very soon. 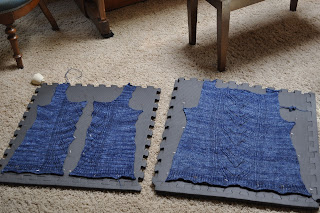 I decided to block these pieces to be absolutely sure that I was getting the measurements I was supposed to.  I swatched, and got gauge (as one does) with the size four needle that is used for the body (rather than the hems), but then as I was knitting the back it just seemed like it was going to be WAY too big.  Instead of doing what I usually do and ignoring my gut until I've already knitted the whole sweater, I stopped about six inches into the back, took stock, and ripped back to the hem to start over with a size three needle.  And then, of course, I fretted that the whole thing was going to be too small.  However, I don't think it will.  It blocked out to the measurements that I'm aiming for (it is still an open question whether I've chosen the right measurements, but that's another issue entirely), so I'm declaring myself happy. 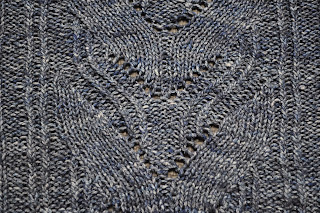 The first picture is truer to the color of the yarn, but this is what I love about this sweater - it's almost sculptural, isn't it?  Such clean-cut lines in this motif.  It makes me very happy. 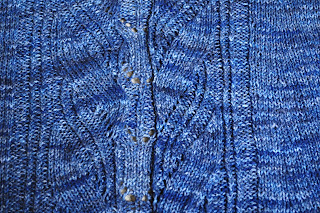 And for some reason, I'm even more charmed by the way the motif is split in half along the button band (which will go right in the middle there).  It's why I'm knitting the cardigan instead of the pullover for now - I love the way this bit looks!  I may have to knit another one as a pullover someday.  This is exactly my kind of sweater, and I love the weight of it in this yarn - very light, with a lovely drape, and I bet it'll be warmer than the weight seems, with the silk and cashmere in it.

Meanwhile, this is waiting for me when I'm finished. 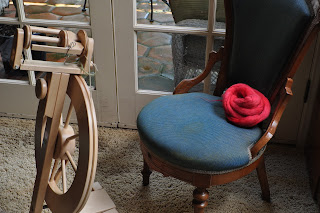 I don't know if I'll get there this week, but it's a powerful motivation.

On another topic completely, I'm dithering about whether to go to Sock Summit this summer.  I'd thought I'd be going to the Golden Gate Fiber Institute, and I've been saving my pennies for that, but I'm not sure that's going to happen now, and I'd hate to miss both events.  Is anyone else going?
Posted by Knitting Linguist at 11:05 AM

Great pattern, and so satisfying to see it blocked out like that

I'm working slowly through Sprossling, and I hope it fits right enough! That's a lovely pattern.

Twinset Ellen and Jan are going to Sock Summit!
;)
Ask me how I know? She was going to help me with my booth had I decided to go (and didn't).
OR...you could come to TKGA in Sept. Oh, well the scheduling thing there Mz. Teach.

Looking good - hope the measurements work out for you.

very pretty motif on the sweater!

Great to see your Leaving. I've had my eye on it since Anne released it, but can't decide on the color. Good to know that you love Oasis.

I'm thinking about going to Sock Summit. I've reserved a hotel room but haven't purchased airline tickets yet. I'm waiting till the class list comes out, with registration info. But I'm hopeful.

Yep, Sallee has me pegged, I will be at SS. If you come, please bring this sweater so I can steal it. I looked up the yarn - oh, boy, that looks like heaven in a skein. And you've chosen a perfect pattern and it is looking wonderful!

(Even my verification word agrees - it is "likers", as in "I likers that sweater!")

I hope your spring catch up leaves a little time for break! It would be sad to miss out on that spinning.

I love the sweater. The cables, the color. Probably the yarn, too (I'll take your word for it).

No idea about Sock Summit. We're moving in June, and it's not yet certain whether or not I'll have a job when we do, so everything is up in the air. Are you coming out to the Midwest again this year to help Chris out with her booth?

Sharon and I were talking about going to the sock summit together.

Is there any info up yet?

You are a knitting machiine! Leaving looks wonderful. And spring break week for many here includes the heavy snow I am seeing out the window. And just after I noticed the tips of the daffodils peeking up. Oh, well, it is late march, it has to melt almost as quickly as it arrived.

Completely agree with the question mark at the end of spring break!

Since you asked - Yosemite is "closed" for a few days, power lines are down. We lost a few oak trees on our place, including one on our driveway, drat it. We spend 4-5 hours chopping and moving it so we could get out the driveway! Our power came back within 48 hours, better than some neighbors. I hope all is settled down by the time you are thinking of coming!
Beverly near Yosemite

(correction - I said chopping. DH has a chainsaw, and so does the neighbor who helped us out!)

Me me me! I've got my tickets and hotel reservation all set for SS11-- I can't wait to see the class list. I hope you decide to go, I'd love to see you again!! :)

Your Leaving sweater looks gorgeous; I just may have to knit one myself.

I have to get to Yosemite soon. I think there'll be waterfalls this time. No Sock Summit for me.

That sweater is beautiful! How's the seaming? Where's it's matching hat? ;)

Your Leaving is beautiful! I keep looking fondly at that pattern and then realizing both the cardi and pullover would probably look terrible on me. Have a great spring break (what's that?)!!