Today I thought I'd try to round up the projects I have on the needles (actively on the needles) for a quick report.  We have mostly recovered from our trip, plus Rick's immediate follow-on trip to Minneapolis.  (As an aside, it's been chilly enough here with this recent Canadian storm that we have snow on our local mountains, and when Rick got off the plane on Friday night, he said it was colder here than it was there.  Today it's sunny as can be, and still hasn't reached 60 yet.  No wonder I can't seem to grasp the fact that we're already well into April!)

First, an FO that I didn't get to show off before leaving for Yosemite (but which I wore quite a bit while there; I didn't even block it first - still haven't, in fact).  It's my second Babushka. 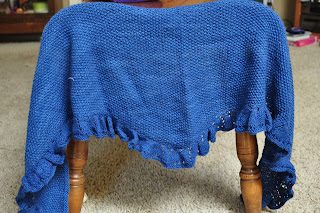 That color isn't quite right - it's a bit darker than that.  In fact, it goes unexpectedly well with the Selbu tam, which was a nice surprise, as (like most knitters, I suspect) I rarely have matching sets of anything.  My first version of this scarf has been, without a doubt, probably the most-worn single piece of knitting I've ever done. The combination of the yarn, the shape of the scarf, and the stitch patterns make this incredibly wearable.  It's simple without being boring, and sooooo soft and warm (hooray for cashmere, silk, and seed stitch).  It folds up into the tiniest package, so it's easy to toss into a bag, just in case its needed.  And I'm hoping that this blue will go with just about anything, in the way that denim does. 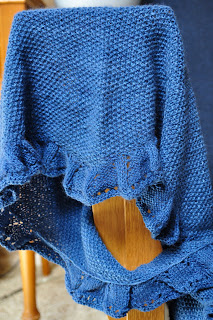 To recap, this is the Babushka scarf, knitted on size 5 needles, out of Jade Sapphire Silk/Cashmere 2-ply.  The only two unfortunate aspects of this scarf are these: the pattern can't be purchased on Ravelry, and it takes a bit more than one skein of the Jade Sapphire to knit one.  This means that I now have two mostly-skeins of this yarn (one in green and one in blue) as leftovers; I must find something to do with them.  How I do suffer for my art.

On the needles I have the mitered blanket that I posted about last time.  I've started the second square.  This is my soothing knitting; I know how the squares go together now, so it's very mindless.  I appreciate having at least one of those projects on the go at all times for when I need to go to a meeting without charts, or at the end of a long day when my brain is more mush than neuron.  Another project like that is the Daybreak Shawl that I started some time ago (long enough ago that Ellen started and finished hers since then - sorry, Ellen!). 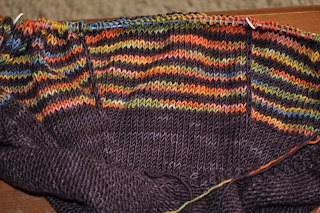 I'm finally on the stripes now (I had to knit the first plain section twice because I didn't read the pattern carefully enough, which I suppose should say something about my terminal and ongoing state of distraction), which makes it move along much more briskly, since I am so very entertained by the changing colors of the lighter section (which I suppose should also say something about my state of mind).  This is the yarn from the first Rockin' Sock Club kit of the year.  The patterns for that kit were really wonderful, but it occurred to me that I was much less likely to wear a pair of colorwork socks knitted from mediumweight yarn than I was to wear this scarf, and as I truly adore these colors together, this seemed like a much better option.  So, to recap: STR mediumweight sock yarn, size five needles, Daybreak pattern.  Very nice.

I also have a pair of socks OTN.  I actually didn't for quite some time, which was kind of weird-feeling, to be honest.  But having finished spinning up some sock yarn, I finally wound it up and cast on for the Rivendell socks that I've been eyeing for a while.  I'm through the first chart on the first leg. 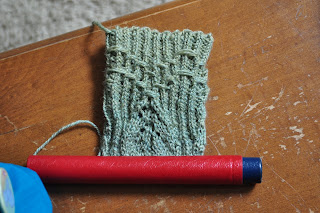 That's handspun (4 oz of superwash BFL, a three-ply worsted-spun yarn), knitted on size one needles, in the Rivendell pattern.  These are coming along slowly but steadily, and I'm very happy with the way the yarn is knitting up.  I'm also glad to be using my handspun as I spin it, even though it means that I'm spinning less than I'd like.

There it is.  The plan for today is to get Younger Daughter packed up and ready to go for her big trip to NYC on Wednesday for a Montessori Model UN convention (eek!), do all the laundry (how does it accumulate so rapidly), and then to settle down with my knitting to watch Paris-Roubaix this afternoon (cobblestone and bikes, hooray!).  Wish me luck!
Posted by Knitting Linguist at 10:55 AM

That's a lot of knitting! I love the color of the new Babushka. Isn't it funny how some projects become go-everywhere garments, where others never seem to get worn?

I really like the way the dark and light colors work together in the Daybreak. I agree; much more wearable than medium weight colorwork socks!

You poor thing, stuck with Jade Sapphire leftovers! If the colors play nicely together, how about this: Taygete
by Romi Hill?

Assuming you can still find time to knit! :)

Lovely knitting on the needles. I love the colours in that striped blanket.

But where is the promised photo of Jocelyn and mum in hand-knitted sweaters? LOL

Seems like quite a few projects, but each always has a place. Poor you with leftover Jade Sapphire. I'm working on something now that might be useful...Glad to hear Rick liked it up here. You must come next trip, we'll show you a good time!

I'm amazed...every single blog I've read this morning talks about how cold and UNspringlike this spring has been. It's the same here in Ohio and very frustrating to live with "almost but not quite" spring in mid-April.

Your projects are beautiful! I love the Babushka. It sounds like you are as attached to it as I am to the Boneyard I made last fall. It will break my heart to pack it away for the summer (that is, if summer ever gets here...).

I love the color of Babushka. I think it's perfect.

Is she going without you?! Phew! May she have good travels, and may your mind still be together when she gets back.

Being easily pleased (colours playing together) is a good thing.

Really like your Babushka. I took my grey alpaca shawl to Mexico (got back a week ago, now working my way through blogs and work and such) unintenionally, and it was a great little blanket for the flying/airport hours of waiting. And a shawl for the rare chilly morning.

Hoorah! This is all wonderful stuff!

- Tell Rick we now have snow on the ground in Minneapolis. Most of it has melted throughout the day, but there is still some in the shadows. That should make him feel better.

- The Babushka is great - but is that a whole bunch o' seed stitch? Not my favorite, I'm afraid. Leftover Jade Sapphire silk cashmere - hmmm, have you thought about Windschief, another Stephen West design. That would be lovely stuff against one's neck.

- That Daybreak is worth waiting for - just gorgeous colors! And yes, it is addictive when you hit the stripes.

- Finally, I was going to ask what sock yarn you were using as I liked it so much, then read it is yours. Wunderbar! It looks very nice in this pattern. I have knit these out of a rayon/wool blend and the yarn wasn't really sticky enough for the wraps to behave, though the stitch definition was good. Yours looks perfect. (And now I believe you have inspired me to cast on the next pair of socks in my handspun!)

My sock drawer is so stuffed with socks, I had to give up sock-knitting. Boy, I miss having those nice little finishable projects to swap out with the long ones.

That much seed stitch is an act of true love. It's absolutely beautiful.