Isn't that what Ph.D. stands for?

This is the time of year when I begin to regard with deep concern the relative levels of the rising tide of work to be done and my nostrils.  I think the former is now officially higher than the latter, and I am drowning.  In some ways, that wouldn't be so bad or unexpected - after all, it happens every semester, right? and it's always worse in the spring as everyone realizes that we're about to be gone for the summer - but lately I have been feeling particularly desperate (in its sense which most closely relates to the word "despair").  It is difficult, after working insane hours to write and grade assignments, finish an article to send to a publisher, attend budget meetings and Senate meetings and faculty meetings, meet with students both in and (mostly) out of office hours, reassure students who can't get the classes they need in the fall due to budget cuts, prep for classes, etc etc (knowing, all the while, that everything that I do is subject to multiple levels of regular review: for peer-reviewed articles, reviews by my academic peers plus the editorial staff of the journal; for my classes, regular end-of-semester evaluations; for my work, regular reviews by three peers in my department, my dean, a committee of my peers campus-wide and my provost) - in essence, all of the things that must be done in order to do my job well - it is difficult, after all of that, to hear on a regular basis (most recently on Wednesday on the faculty Senate floor), our administrators saying that we all know that faculty really don't work that hard.

So I've been trying lately to find other happy places to focus on.  I'm not part of the Friday Fave Five that Willow is so good about participating in, but that's the kind of list I'm going to make on this Friday.  And I'm going to be really honest - aside from that work thing, I have been feeling very very lucky lately, because that work thing makes me realize how many of the really important things in my life are OK, and how very lucky I am in that regard.

1.  Even in that work thing, I am reminded of all of the reasons why I do my job.  My classes yesterday all went really well - students talked, students asked questions, and there were several of those lovely lightbulb moments that make teaching one of the most exciting and fulfilling things I can imagine.  Love it.

2.  Last weekend, when we found ourselves unexpectedly child-free, Rick and I took the train to Los Angeles for a lovely overnight getaway.  We ate at a restaurant we've been wanting to try, went to a concert given by the UCLA Philharmonic at Disney Hall, and stayed the night in a nice hotel.  We even got room service breakfast on Sunday!!  Too fun.

3.  Younger Daughter's trip to New York was a complete success.  She loved it, she learned a TON, she felt really good about the whole thing.  If any of you are on Facebook, you can search out Montessori School of Oceanside, and see pictures of the kids doing their thing.  I got a text message from one of her teachers with a picture of their delegation on the floor of the UN General Assembly, and I just about cried.  Unutterably cool.

4.  The trail that I love to hike for my weekday morning dog walks finally dried out enough this week that Tilly and I could go - I am always so much happier in my skin when I can get out and walk on dirt.  And Tilly is much happier when she can run off-leash and come home smelling like sage.  In fact, the sage is blooming, as are the monkeyflowers and blue-eyed grass, and I can see the ceonothus, too.  It's green green green, and that doesn't last long around here (in fact, the grass is already becoming gilded - summer gold is on its way), so I'm soaking it up.  I also had two very unexpected wildlife sightings on Tuesday.  First, I came around a corner to see, perched in a still-bare tree, a mourning dove on one branch and a kestrel on another.  The kestrel was a bit smaller than the mourning dove, but was clearly trying to be the BMOC - and the dove wasn't buying it.  The kestrel took off and flew around a little bit, trying to convince the dove that Kestrels Eat Birds Like You!!  The dove wasn't convinced.  (This wasn't unlike that cartoon from long ago with the little bitty chickenhawk that kept hollering, "But I'm a chickenhawk!" at the chicken that was ten times its size.)  Eventually the kestrel gave up and went away, leaving the dove entirely unimpressed.  Then a bit later, as I was standing and looking at the little lake by the trail, I saw an odd undulating in the grass.  Across the trail went a long skinny furry reddish short-legged thing (the legs and fur made it clear to me that this was not a snake; I am nothing if not wise in the ways of such things).  It dove into the grass on the other side, and undulated its way down towards the water.  I was at a total loss (the best I could come up with was, feral ferret?), until a little bit of research informed me that we, in fact, have indigenous weasels in California, and that I had just seen a California long-tailed weasel.  First ever!

5.  And finally, on last Friday, I received a huge gift from the son of a dear friend of mine.  He is learning to fly (and is, in fact, if I understand it correctly, about a year away from testing for his pilot's license), and on Friday evening, he graciously invited me to go flying with him during one of his lessons.  I love flying.  I always wished I could learn to fly, so having the chance to live vicariously through this young man is wonderful.  As the kids in my life (many of them not so much "kids" anymore) - both my own and my friends' - get older and start to find their own ways, I feel constantly lucky to be able to see who and what they are becoming, and truly honored by the ways in which they let me into their lives and share their passions with me.  It's like I've gotten to expand my own experience database a hundred-fold through their generosity and excitement.  Does it get any better than that? 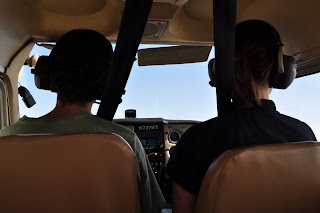 (That's my friend's son on the left.  We'll call him the Pilot, since he was.)(Apparently this shot appears on the camera of absolutely every person he's ever taken flying with him.)  We took off from Montgomery Field and flew down to Brown Field, right on the US/Mexico border. 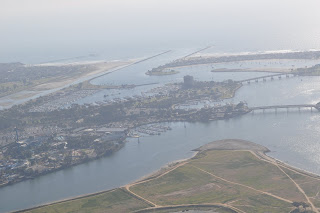 The views were absolutely spectacular.  The Pilot executed three touch-and-goes at Brown Field (those are exactly what they sound like - he comes in for a landing and takes off immediately, circles around and does it again, etc).  And he did it, very well, in a cross-wind, which I am assured is not nearly as easy as he made it look.  I loved it, since take-off is one of my very favorite parts of any flight (because it's so clear from the ground-speed that we're going FAST!  and I love going FAST!).

Then we headed towards the ocean, where we saw a submarine, cruising along on the surface.  It was like getting to see a whale, somehow - totally impressive, and utterly unexpected.  This thing was huge. 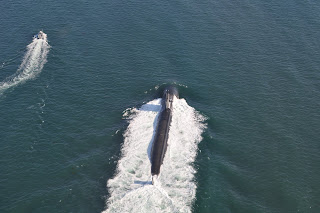 Then around Point Loma for our flight home. 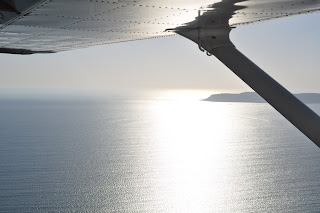 How cool is that?
Posted by Knitting Linguist at 9:18 AM

Or, Piled higher and deeper. I'm with you, flying is sooo fun. I love seeing everything from up in the air.

I hope the moments like this help to make the work side manageable.
My youngest and I went for a walk in the woods today and heard I first ever woodpeckers. Not sure which of us was more pleased

unbelievably cool. wow.....from the whale-like submarine, to your love of flight, to the chickenhawk :), to children moving so well out into the world, there is a lot to revel in, and i'm so glad you're mindful and able to be in it.

and woe be onto those who say teachers at any level are lazy. them's fightin words. you expect to hear it from politicians, and people who are just ignorant, but from your own administrators?!

That is totally cool.
I'm glad you did the 5 things. But I'm extra sorry you're feeling so overwhelmed and unappreciated in your work.
That said, you are an amazing woman, and I'm totally in awe of you most of the time, so maybe that will help?
Oh, that and that the idiots who think teaching is easy and lazy and "if you can't do, teach?" Well, let's just say they're gonna get their's one day, I'm certain of it.
(((((hugs)))))

Love your pictures from "up in the air". I must say, the term "indigenous weasel" cracked me up for some reason.

Ohhh. The flying pictures are SO COOL.

So Cool! All of it! (except for the stupid work part)

I'm sorry to hear that your administrators are so unappreciative. I am working part time - only 2 1/2 hours per week this semester due to funding cuts and my choice - it's strange how people think that's nothing! With preparation, marking, administration and travel - I put in an eight hour day but only get paid for the 2 1/2 hours that I'm face-to-face!

I'm glad that life is going well outside work. I, too, love flying and wanted to get my pilot's licence. I took a trial instructional flight but was too scared to land the two-seater!

I'd like all legislators everywhere to have to spend one day, just one, working in a classroom. Not preplanned, not a special event, just the daily slog. When the Gov. of NJ can call teachers the new welfare queens I just go crazy. Glad the rest of your life is giving you things to be happy about. I just want some sun!

I work at another CSU. We were recently chastised for choosing to focus on the wrong set of high priority student files. Most of us also work 10+ hour days but only get paid for 8. As you know, the CSUs have also made huge cuts in the trained support staff and only intermittently replaced them with an ever-revolving group of student workers.

So admin is a kestrel, circling obnoxiously and trying to be bigger than you, and you, sweet as a dove, get up on a plane and fly way faster and higher than any little kestrel could dream of.

Or something. How cool that you got to see them and the weasel too!

Meantime, I want that tax on the ballot. Fund our schools!

I hear you on the crazy. I hope things calm down soon! The summer is coming. =)

And that's quite a list of good things you have! I've never flown in a small plane like that, but it looks like a lot of fun. I don't suppose you got a picture of the kestrel, did you? (I'm still thinking on that kestrel fiber. The moment I can get back to dyeing...)

PhD stands for Permanent Head Damage, according to my supervisor! :) That was a lovely post, thank you so much. I love your positive attitude to teaching - it's so easy to slip into negativity over time and you are always 'sunny side up'. And I am very envious of your being able to fly in a small plane like that.

I was impressed at the weasel sighting - I had no idea we had any indigenous to CA when I saw your plane ride photos! Totally awesome, as I still say. ;)