Well, we made it!

We did, in the end, go to Yosemite.  It was under false pretenses, rather, but it as it all worked out in the end, it's OK.

On Thursday morning, we packed up and got ready to go, waiting to hear from the managers at the place where we were staying whether the water (which was off due to a broken main) was back on.  Now, I'm willing and able to go without water in the right circumstances, but those circumstances (not to put too fine a point on it) involve access to an outhouse (especially in the winter).  It's no fun to be in a house with no running water, if you can imagine what I mean here.  I will say no more.

We finally got the news that the main was fixed, and packed up and hit the road around 1:00 for what should have been a 7-hour drive.  (Shades of Gilligan's Island here.)  Around San Onofre, we realized that we had forgotten the camera.  We turned around.  One hour later, we were back at San Onofre.  (One ought not to have to see the same nuclear power plant twice on the same drive.)  And then we hit LA.  It took us a full hour to get through Santa Monica.  Santa Monica really isn't that large. But we finally made it up to Yosemite and to the house where we were staying at 10:00 (pm), to be greeted by my parents with the news that with regard to the water, not so much.

However, we all decided to make the best of it and headed to bed.  It was rather disconcerting on Friday morning when the manager made it clear that she assumed we had water and had to be told that, in fact (as I may have mentioned), not so much with the water.  We were assured that it would be on by the time we came back from our adventures in the valley, and further assured that if it were not fixed, we would be moved to a house with running water.  (Hooray!)

So off we went to Yosemite Valley.  We came through the tunnel in the road down into the valley to be met with this: 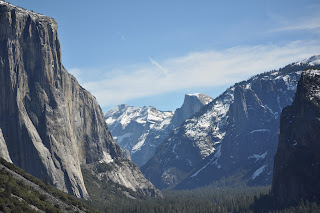 Talk about a perfect day for views.  We stopped to be tourists (of course). 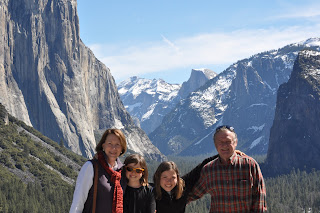 The whole park was caught between burgeoning spring and winter. 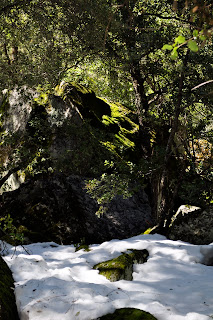 New green growth and white snow were everywhere.  Especially on the trail that we took to hike to the bottom of Upper Yosemite Falls, which were in full flood.  It's one heck of a climb (about 1100 vertical feet over the mile and a half up), but the views of Half Dome through the trees were pretty inspirational. 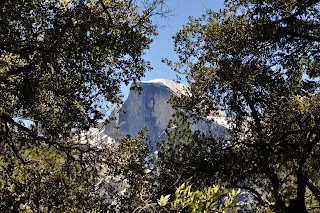 And there were some places to stop and (literally) hang out. 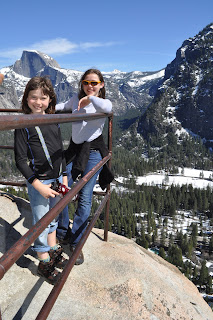 (Note, I did not know about that until it had already been done.)(And yes, the drop just to the right there off that rock is exactly as precipitous as it looks.)

When we finally made it to the view of Upper Yosemite Falls, we felt like we'd really earned it.  And we found out later that they falls are probably the best they're going to be all year. 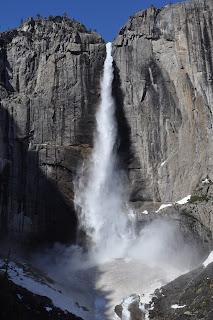 I'm convinced.  Do you see that they're falling into a huge snow pile there?  Amazing. 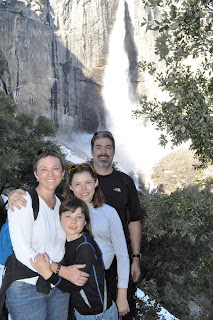 We also found a place to look down on Lower Yosemite Falls.  I didn't last long, I must admit.  Those are great big redwood trees way down there - we were high up. 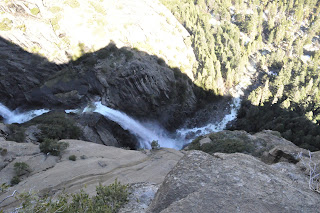 The trails were wet and slick and steep, but beautiful in their own right. 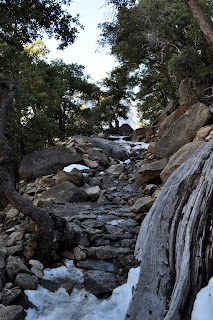 It was a wonderful way to spend the day, even though there was still no water when we got back.  But we moved houses, and never was a hot shower more welcome.  You can also bet we all slept well. 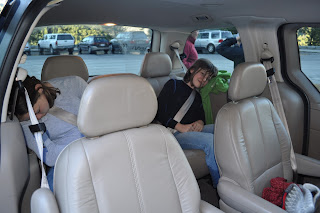 The rest of the weekend was much the same.  We snowshoed, and snowshoed some more, and everyone went on a ranger hike (while I worked, sigh).  And on Saturday night, my parents treated us to a truly amazing meal at the Ahwahnee, which was quite an experience - I was lucky enough to sit with a view of Yosemite Falls through one of the huge cathedral windows.  The food was delicious, the views were like a postcard, and the company was wonderful; it was certainly a spectacular way to spend an evening.  (The girls were duly impressed by the grandeur of the dining hall, and Younger Daughter was particularly taken with the pianist: "Look, mama!!  It's not a radio!"  Heh.)

In the middle of all of that, I got very little knitting done.  In fact, most of what I did get done happened on the drive home.  So this is what I have to show for my weekend away. 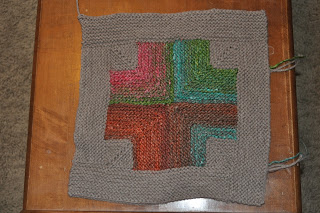 And that's all the news that's fit to report!
Posted by Knitting Linguist at 7:48 PM

Wonderful news from the world of the Knitting Linguist! Much more newsworthy than what's been happening at Willow's Cottage. Love love love that mitered square! I'm gonna try one!

I'm so glad you got to go, and that it all worked out all right in the end. You hhad lovely views and great family time so it seems it was all worth it.

The views more than make up for the lack of knitting, wonderful

Beautiful pictures! So glad you were able to go and had such a good time. Your mitered square is looking great!

I'm going back to stare at your beautiful pictures. Thanks so much for sharing them.

Wow. Looks like a great trip (give or take a little running water). We're planning a trip to the Grand Canyon at the moment, but I think I'm going to have to bump Yosemite up a notch, too. =)

I have never been to Yosemite - one of these days I hope. And love the mitered square. I bought the pattern, too, but who knows when I'll get around to trying it out.

You've got some great photos there! Love the one of the girls zonked in the back!

I have such good memories of my one trip to Yosemite when I was their age!

Miss seeing you around!

Wow. What pictures! What a trip! We've only done Yosemite once and there was no snow nor high hiking then.

Wow! (and I got a touch of vertigo looking down at the lower falls just with the photo) The smiles are even better than the views.

Seems I need to plan some amazing park trips.

Oh, wow! I have *got* to get to Yosemite. We've actually been talking about it for later this year. Fabulous! Thanks so much for sharing it with us.

Oh.Hot.Da**! Now you've gone and done it.
Yosemite, on my NEW travel agenda (which, come to think on it, I didn't have an OLD one)
Those photos are amazing, and may I just say that every time I see a photo of you doing something with family, (it's always with family) you look so beautiful (relaxed, happy - just exactly the way we're all supposed to look, ya know? Yet I always failed at that, and you - wow, well just wow - sorry words are failing me tonight)

And yes, I'm so happy I enabled you right into that Mitered Square Blanket pattern...*wink*
(((hugs)))

Glad you had a good vaca and that you were able to go!

Water, water everywhere and not a drop to flush.

It looks like a wonderful trip! And I'm with Gwen - your photos are good enough to create vertigo while I'm sitting at my desk.