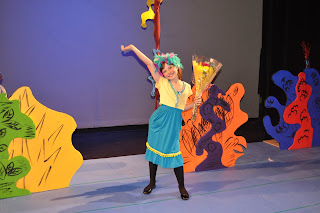 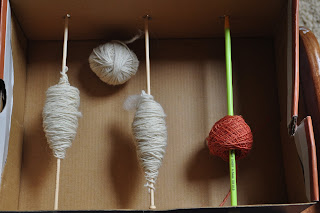 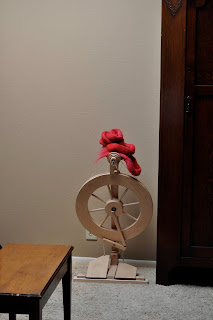 It sits there, with the second half of my lovely fiber waiting to be spun and plied (and glowing beautifully in the errand sun - it hasn't gotten much above the mid to high 60s around here lately, with lots of June Gloom in evidence; sun?  we don't need no stinking sun!).  Soon, my precious, soon.
Posted by Knitting Linguist at 3:32 PM

Ah, the things we do for love!

Father's Day in Australia is not until first Sunday of September.

Week to week is better than day to day. That spinning class sounds like loads of fun. Our poor Lendrums could have a little pity party together. Mine has tried to cozy up to the TV since I've been ignoring it in favor of finishing a couple of sweaters for my niece's (soon to arrive) twins.

So glad the class went well, have a great weekend

I know how busy you've been! Hang in there...Younger daughter looks joyous!
(((hugs)))

The class is sounding great, your YD looks fabulous, and that wheel just about breaks my heart, it looks so lonely!

I would like some yarn in the colorway "Seussical", please!

I keep telling myself that living week to week could be something like being "in the moment," which I hear is supposed to be pretty awesome. Hasn't made the week to week any better yet, though. Hope you find some downtime soon!

Oh, and congratulations on the class success, too. Sounds like a lot of progress for a couple of hours! =)

I keep thinking I should learn to spin, but alas! Only two hands.

Your poor wheel does look so lonely there all by itself...

Your daughter looks like she's positively beaming with delight which is utterly delightful in itself. The Seussical musical sounds fabulous! So does your class. Hope it keeps going so well!

So cool that she got to have her grandparents there cheering her on!

Busy! Good thing you've got that spinning class to spin for, or would you do any spinning?