Two weeks down, thirteen to go!

I know how bad that sounds.  This is always the tough part of the semester, when I feel that I am still setting expectations for students, and they're getting used to me and I'm getting used to them.  By about week four, things get good for a while, and I stop counting until week 11 or so rolls around.  At that point, we're all counting down to finals, for better or for worse.

Meanwhile, I mentioned last time that I had a few things to share from our busy Labor Day weekend.  First, Younger Daughter, all got up for her feis. 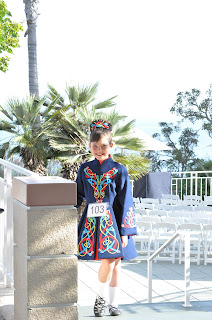 It's hard to get pictures of her in action dancing, without catching other kids in the photos, too (and I don't want to put some other kid out there on the internet), hence the pose.  Rick did manage to get one action shot without identifiable extras, though: 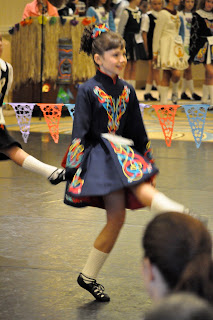 That gives some idea.

As for the other activities of the weekend, I have to share something that I got myself at the Go Native Days gathering in Tehachapi.  I have long wanted a Native California basket.  In fact, I have long wanted to learn to weave a Native California basket, and someday I will.  However, learning to basketweave generally starts with gathering the basketmaking materials with a master weaver, then waiting for those materials to cure, etc, etc (not unlike asking someone how to knit and being told, "Here's a sheep"; it's an awesome way to learn, and maybe even a right way to learn, but not something I could take on right now).  The time will come when I can do that, but it isn't now.  So instead, I finally committed to buying one, and came home with this. 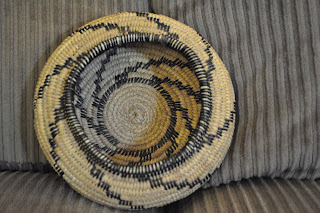 Isn't it lovely?  It's a Kumeyaay basket.  The Kumeyaay people were split, many many years ago, by the arbitrary imposition of what is now the U.S./Mexico border; the weaver of this basket comes from Baja California.  The pattern is called a whirlwind pattern, and it satisfies my abiding love of spirals. 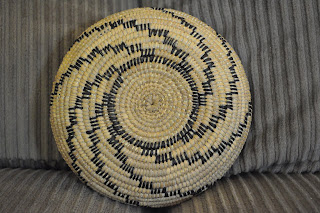 It's woven of juncus grass; the black is dyed juncus.  It smells nice, too (it must be the knitter in me, but when I see a basket, I automatically smell it; am I the only one who does this with yarn?). 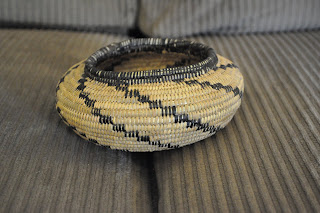 Now, while I do know that I can't dedicate myself appropriately to learning to weave something like this, Rick and I took advantage of the fact that there were weavers at the event who were offering lessons in things like basket starts and pine needle baskets.  We headed off to the pine needle basket booth, and an hour and a bit later, had these. 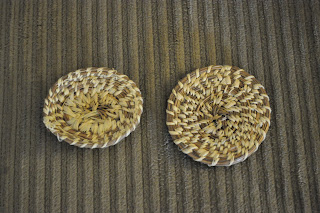 Little bitty pine needle basket trays.  (Very, very little bitty.)  They're made of pine needles and raffia.  And because one should always give one's first basket away, I'm going to sew hair clips to the backs of these for the girls.  And because I am an honest person I'll answer for you this question:  Guess which one is mine and which is Rick's?

(His is on the right.)
Posted by Knitting Linguist at 7:58 PM

I thought I was the only yarn smeller in the world! I love smelling yarn!

I had already guessed the larger one was his!

The basket you bought is lovely.

I hope you settle into routine at work very soon.

What a lovely basket, the way the pattern goes around the basket is wonderful

I love the smell of silk yarn especially.

Wow, that basket is wonderful! And so are yours. What fun to learn.

I'm a pine needle basket maker,and when I did bazaars, I usually had a hands-on table where everytone could try their hand at helping to make a small basket. They then submitted their name to try to win the finished product. More men & boys were wanting to give it a good try than women & girls. I was very suprised. This seemed to hold true thru all bazaars. basketmkr

The basket is beautiful! I love baskets...it is terribly hard to resist them. Engineers also make very good pie crust shapers, I've found. There's something about precision and pattern that seems to "click" in ways that make for very neat work. (At least for Branden, which is particularly funny because in other things I am always the more careful and neater of the two.)

At least you're not counting off the days. Yet. :)

Your daughter looks darling! I'm sure she was fabulous.

The basket is really lovely and while it would probably be fun for you to do one yourself, it's always good to appreciate an artisan.

What wonderful baskets, all around! And it is nice that Rick is good at the baskets - maybe he'll weave you a bigger one someday.

My SIL always gives a Navajo wedding basket as a wedding gift. Such a nice tradition!

And I forgot to say, I love both the posed and the action shots of YD. She looks so competent at what she is doing! (And she looks so pretty, too.)

What a fabulous dress YD gets to wear dancing. She wears it well!

Love the smell of grass baskets. Even the two handed down from my mom that are over 60 years old still have a lingering scent.

I'm with Ellen - maybe Rick will take up basketry as a relaxing hobby.

some people just 'can do some things' - and perhaps Rick needs to take up more fibre craft? Although be carful where you take that as sharing stash is only a good idea until you find they have used something you were planning to use yourself "D

Lovely! One of the local folk festivals showcases traditional crafts and often has basket makers. Your husband seems to have a knack!

And have you considered taking photos of your daughter in action and blurring the background? I believe that's what the YH did when she posted photos of her daughters at school events.

I once tried making a basket out of long pine needles. Looked simple enough, right? After hours of work, I had something that could neatly hold a penny--and new respect for birds!

I don't always smell yarn, but I often smell baskets when I find them. And I like the smell of the cane when I cane a chair, too.