I think I've entered into the Knitting Doldrums.  Apparently all of the projects I have actively OTN are either stockinette/garter stitch, or involve colorwork and (thus) multiple balls of yarn (making for bad meeting knitting), or both.  So I'm bored.  I mean, Baby Surprise Jackets are fun (and in fact, I just wound on for a third and last one today), but they're garter stitch.  I also cast on for a pair of these scarves, out of a lovely alpaca laceweight.  But it's stockinette.  And really unattractive stockinette, to boot (I know, they'll block out beautifully, but at the moment not so much with the beauty).

Meanwhile, I'm slogging away in the Slough of Linen Stitch. 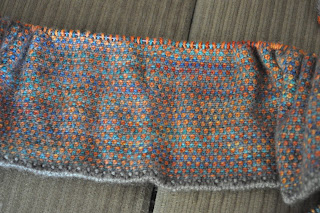 I'm further along than that, although not a lot.  It takes about 25 minutes to get through a single row on this one.  In many ways, it would make perfect meeting knitting, except that it comes with three huge balls of yarn, which is neither small nor inconspicuous.  That's the Vancouver stole, by the way - I got the yarn for it at Sock Summit, and I cast on a few weeks after getting home.  But as I said, the rows are almost 400 stitches long.  And that's 400 stitches of linen stitch, so not all that fun.  The results are stunning, but it's a slog.

I also finished the first of my second pair of Silk Road socks - this time for me.  And they fit! 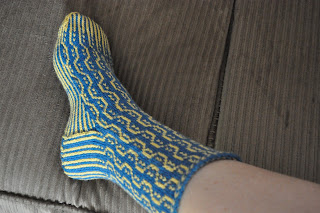 These are actually rather fun to knit, and I can do everything without the pattern (since it's my pattern).  But I do have to look at my hands when I knit stranded colorwork like this - again, not so good in meetings, as eye contact is an important part of letting people know that they are being listened to. 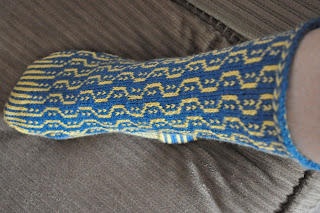 As per my usual rule, I promptly cast on for the second sock upon casting off for the first.  I really should make these my evening knitting project, but there's this small part of me that wishes the Vancouver stole would be ready for taking with me to the American Anthropological Association meetings in mid-November.  They're in Montreal this year, and I understand that it's chilly in Canada in November.  (heh)  Of course, the fact that I also have to have a paper written in time for the meetings, as well as a presentation prepared, and a report for the business meeting of my particular association, means that there are a lot of deadlines all coming in at once.  The stole probably won't get done.

So, what does one do in the face of multiple looming deadlines and boring knitting?  Cast on!  I just wound up some gorgeous Jitterbug sock yarn in a deep electric blue that has been marinating in stash more than long enough.  The plan is to cast on for a pair of Isabella D'Este socks just as soon as I finish up here and seam the second BSJ.  I just saw that there is no picture of the socks on the Ravelry site, alas.  These are from the new Knitter's Book of Socks, by Clara Parkes.  I will talk more about how much I love this book in another post, but for now just let me say this: I totally want to be Clara Parkes when I grow up.  The woman thinks about yarn and wool in the most wonderful ways, and the collection of patterns in this book is wonderful.  If you knit socks, and if you like to think about the technical aspects of yarn and yarn choices, then this book is the book for you.  (I guess I just wrote about it; I don't know what else to say, really - I just love anything by Clara.)  I had a lot of fun talking to Rick about some of the more engineeringly observations about tensile strength, etc.  It's kind of fun when our worlds collide that way.

So, off to try to knit my way out of the doldrums!
Posted by Knitting Linguist at 12:39 PM

Sometimes you just have to slog through the doldrums. Or quit knitting---hahahahahaaaaa! (Oh, I'm so funny, I can't stand it!) Even the most beautiful yarn can't make up for row upon row upon row of stockinette if that's all you've been doing for several projects. I can handle garter stitch better than stockinette.

And the new book is awesome. I got mine this week and am going to have trouble narrowing down to the first pair to cast on.

You silk road socks are lovely.
And knitting should be fun - not boring - so cast on away!

Production knitting! (the 3rd baby surprise is not about the joy of discovery anymore, is it?) Your doldrums are beautiful.

Clara Parkes is on my auto-buy list. Dang it! I don't need to spend more money on books this minute! I could get it and wrap it and wait for Christmas... I don't think I like that idea.

Also got my copy of Clara's book this week...she's a 'must have' author. I spent more time than I should have pouring over the patterns & still haven't made my decision.

Your Vancouver stole is the kind of shawl I dream of wearing. I never dream of wearing lace shawls. Too bad it's such a slog. On projects like this in my life (which also include whole house de-cluttering) I tend to look them as a 5-year plan.

"Chilly in Canada in November" ummm - it depends! I live up here so am used to the cool but last mid-Nov I was 5 days in Toronto and needed only a light sweater and goretex jacket (fashionable I'm not). What I DID use a lot were shawls so git yer stole knitting on! Also: word verif: defult! As in: Stole knitting for Canada is a logical defult!

My goodness.
I'm not sure what the cure for doldrums is, but I'm fairly sure that trying to toss ONE more thing into your nutty schedule isn't going to make it easier to accomplish it all!!
I'll cheer you on from the sidelines, tho'
(((Hugs)))

I'm sorry for the doldrums, but that linen stitch is absolutely beautiful!

I love the blue and gold in the silk road socks, too.

Hope you find some exciting knitting to carry you through the rest of the slogging. It's so frustrating to have all these things to knit and not be interested! Casting on for a project that is suitable for meeting/interesting knitting sounds like the perfect solution to me. =)

I've had doldrums too with cabling even after doing the same 6 row cable for 60 inches. It will end though( someday).

"the slough of linen stitch" - apt description, indeed, as is "stunning".

The new Silk Roads must make your feet want to dance! Thy are beautiful!

Isn't stockinette boring enough for meetings? I'm slogging through several stockinette projects, and coming to enjoy the mindlessness. Since my mind is spinning on other things. But that SHAWL. Get going on it. Totally stunning. Drop everything so you can take it along and look fab.

I was going to suggest casting on! Although it may not be the best of ideas.....

Your Silk Road socks look fabulous. That seminar sounds like fun, Montreal is such an interesting city. Sure, a paper and a stole by mid November, easy peasy!! Or not. ;)

Hang in there with the linen stitch. It has become my new favorite stitch--I can do it while reading!--and the fabric it produces is, for me, well worth it. But I know that many others don't feel this way about linen stitch, alas. The stole is really beautiful!