So spake the blog

I don't know if you all realize just how much influence you have.  But by way of example, when you, with one voice, said that I should finish the Vancouver stole (using words like "beautiful", and "you should finish it"), I was re-inspired.  And so I have been knitting, exclusively and nearly non-stop during every spare moment (of which there have not been many, actually), ever since.  And at 2:00 am on Saturday morning, I finished the endless insane 390-kitchener-stitch lovely and well-designed tubular cast-off.  See how powerful you are?

And, as I was knitting along, thinking to myself that I really, really wanted this finished before leaving for Montreal (more on that later) on Wednesday, it suddenly occurred to me that I also wanted a matching hat.  I mean, we all know that the knitter's worst curse is the plethora of lovely but utterly mismatched handknits that we pile upon ourselves come the cold, but I wanted something matching.  (I should note here that I have been so crazy at work lately that 10-hour days aren't doing it anymore, which is why I haven't been blogging - when I have had a spare minute these last few weeks, it has been dedicated to Vancouver. Nevertheless, I wanted a hat.  Before Montreal.)  And Lori came through for me (without any prompting or knowledge of my need, which is impressive) when she posted about a pattern that she received for her recent birthday - the Hat for Eudora.  So I knitted one of those, too. I mean, what's one more thing when life is already bat-shit-crazy busy and fulfilling? 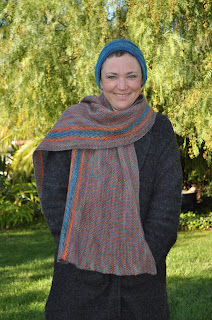 And, on Friday night, as I was plowing through endless rows of linen stitch followed by the lovely 390-kitchener-stitch cast off row (it is a really, really good thing that I think kitchener stitch is the best thing since merino/silk blends), I watched a movie that Helen had recently posted about: Crazy, Stupid, Love.  And she was right - I laughed out loud (which I don't often do), and I found the relationship between Steve and Ryan to be the most compelling and intriguing of the lot.  I liked that movie very much, and it certainly kept me happy during my 15th inch of linen stitch.

And aren't the results nice? 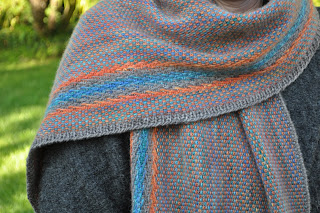 The difficulty with knitting this much linen stitch is that it essentially means knitting an entire stole in the equivalent of 1x1 rib.  Hard on the wrists.  Not to mention the sanity. 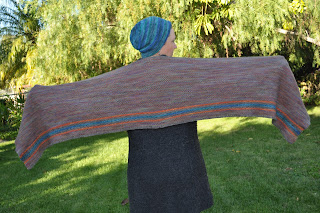 But so lovely.  To recap, this is the Vancouver stole, knitted out of Blue Moon Fiber Arts BFL, in three colors (all on my Rav page).  I will say that it didn't block out to be as big as the pattern said (no, I didn't swatch, why do you ask?), but I think that it is a size that I will use a lot here, as opposed to just in very cold places.  It also drapes beautifully.  And the yarn was a dream to work with.  The three colors together also made me very happy - each of them set the other off perfectly. 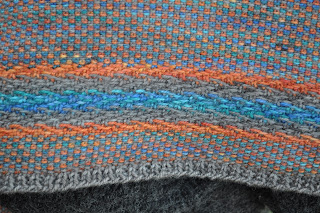 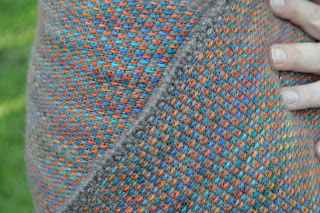 The hat was also a delightful pattern - it knitted up very quickly (I did it all yesterday), and it's fun. 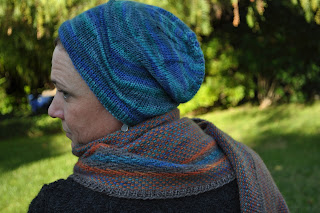 Do you see the nifty little welts on that side (hence the name - Eudora Welty, get it?)?  And it has a wonderful turned-up hem, in a contrasting color. 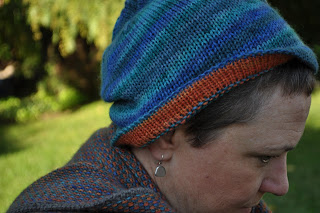 I may actually make another of these in the gray color from the shawl, with a blue turned-up hem, that's how much I like it.

In any case, they are done.  And I leave on Wednesday, and Rick's cousin is coming into town this evening for two nights.  So it's a really good thing that it's done.

I should also mention, in case anyone's worrying about the "real-world" side of this trip, that my conference paper is written, and the presentation has been prepared.  So it's not like I'm going to be standing up there solely on the strength of an admittedly-nifty but not very linguistic stole.  In fact, I probably won't wear the stole for my talk - that's what my handknit henley is for.  Now I'm just hoping that we don't freeze to death while we're there.  (I'm becoming rather a delicate flower when it comes to cold weather - when I had to get into the pool this last week and it was 43 degrees out, I confess that I griped.  Loudly.)

Anyone have any suggestions for things to see and do whilst in Montreal and Quebec?  Younger Daughter is coming with me, and I'm planning to enjoy some time in the city once my paper is over.

Now, I just have to decide what knitting projects to pack...
Posted by Knitting Linguist at 4:09 PM

ah! Crazy, Stupid Love, such a wonderful movie! I just watched it last week, so very sweet. But then again, Steve Carrell always touches me somehow. Perhaps I need to make my own version of your Vancouver stole...

The shawl is lovely! Well worth the effort!

Gorgeous shawl! It looks like the perfect thing to wear where you live.
Enjoy your time in Montreal :)

beautiful and a matching hat too, what a lovely combo

I think the shawl is lovely. I'm glad your bloggy friends compelled (oops, strike-through doesn't work in comments) I mean, encouraged you to finish it. That linen stitch is amazing!

Have a wonderful time away.

Wonderful, I really do like the stitch effect.
Have a great time

Montreal! I'm envious. What a lovely city. Don't miss Notre Dame de Bonsecours, in Vieux Montreal—the oldest church in North America (I think, but certainly in Canada), it has boats hanging from the ceiling. And especially don't miss the tower and the museum with its dioramas of the life of Marguerite de Bourgeoys who founded it. They were made by the nuns and they are wonderful. The tower gives you a view over all of the city and the river, and you go up quite near the life-size angels on the roof.

I also love the Biodome, and the Botanical Gardens, and eating pastries in one of the many little cafes... Oh, and the McCord Museum of Canadian Life/History is pretty interesting too. Bookstores! Music! Fabulous food! Have a lovely trip.

Second the McCord - "known for its extensive collection of period costumes especially women's dress..." Also: Atwater Market. If you are going to Quebec City, stay in the old town (an UNESCO Heritage Site)and simply wander being sure to use the stairs between upper and lower town and visit the Plains of Abraham which doesn't look like much but is one reason why we have such an interesting combination of English and French history up here.

OH IT'S GORGEOUS!!! So's the hat.
I think a gray one with blue trim is totally necessary, too.
And now, I have a movie to find, provided I can find the connector to make my (newish) DVD player hook up to my (VERY oldish) TV since the VCR died.

I hope you have a terrific time in Montreal! And knock 'em DEAD, lady!
(((hugs)))

The stole and the hat are as gorgeous as expected!! Love that the hat has name provenance.

Finished it AND the hat while swamped, eh? Isn't that always the way? For some reason, the more I have to do the more I can get done. It's those medium busy days that it all goes to Hades.

Have fun in Montreal! All I really remember are the colleges that are just on the street and the underground shopping mall! Millions and millions miles of underground shopping. And Cathedrals. Oh! Have some of the lemon *$'s drink. YUM. McCord's is really interesting.

WOW! From my view, it looks well worth the work! Wasn't my work, but still.

No idea on the travel. Have fun!

Gorgeous stole. Good for you for sticking with it. I lived in Montreal for 18 years. My recommendation would be just to walk around, whatever part of town you're in and observe. By the way favorite yarn shop in Montreal is called Mouliné. It's a short walk from the Lionel Groulx metro station. Enjoy your trip!

No wait, given the stitch pattern, that would be a linenguistic shawl to show off in, wouldn't it? It's beautiful, and so is the hat. You did it!

Ah, yes, a linenguistic ensemble, what a coup! I'm smitten with the edging and the colors of the shawl. The contrasting hem on the hat is an insider's delight, a FANCY finishing touch. Inspiring.

Gorgeous! And more or less in my school colors, should you ever tire of either ... :)

Totally jealous that you have time to knit! I don't, and it's killing me. I wish I had a spare pair of hands/arms (and not for the first time).

Gorgeous - great colors. And I love me a contrasting color hem tucked under there. I have been kitchenering like crazy because of a cut and paste need, rather than finishing off. Not quite as fun, but boy it is handy. Have a great trip. I love Montreal, but haven't been for years, so nothing good to add.

I love the colors in that stole (and the hat, of course). I can't imagine knitting that much linen stitch, but I really, really love the way it came out. Go you! (Now go knit some lace or something.)

Have fun in Montreal, and I hope you have more knitting time once the conference craziness is over!

Both hat and stole are wonderful. Tubular is so totally worth it. You will enjoy it everytime you wear the stole.

You are SO cute in that combo!!! I guess I'm going yo have to give tubular another try ifthe results are that great!

I'm so glad you liked Crazy, Stupid - it's always good to know that one is not alone. The shawl is a beautiful piece of work, and of course it needs to have two hats to go with it :)

Hurray! You did it! And it's a beauty. I think you will be able to wear this a lot. Now go get a hand massage!