A knitting blog should have knitting...

And so I do.  Along with gathering up projects long-planned but delayed in execution (off with their heads!), I have also been gathering up WIPs.  By which I mean, if I am going to be entirely honest, I have been sidling up to my WIPs, trying not to make direct eye contact, lest they charge.

However, I have finished two of them.  They are two of the most recently cast-on, admittedly, but they are, nevertheless, off the needles.

The first is the Leif Slipover, which I knitted for Older Daughter. 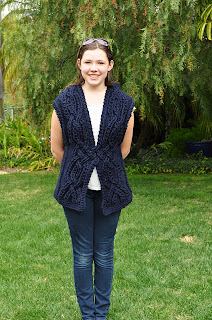 I have my doubts about the wearability of this vest, to be absolutely frank.  It's bulky.  I admit that I have serious prejudices about bulky yarn - most of those have to do with the fact that it's...well...bulky.  It doesn't drape in any sense of the word.  I guess it's cozy (right?).  And cozy is nice.  I think what it boils down to for me, though, is that I never feel like it's moving with me when I wear bulky stuff.  I feel like my clothes are wearing me instead of the other way around.  I'm really hoping that Older Daughter doesn't share my prejudices.  (It may help that she has easily four inches on me, too; I think height helps when wearing big clothes.)(OK, I guess it's almost five inches by now.  I'm still in denial.)

Here's what made me knit it, though. 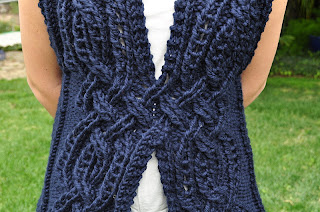 That, right there, is a very cool design feature.  Very cool.  And I do love how sculptural the cables are at this gauge.  I knitted it on size 15 needles, instead of 17s, but other than that, I knitted the pattern as written. 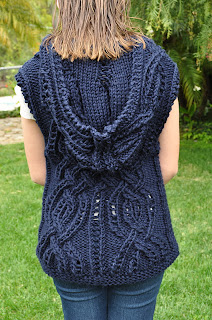 I also knitted it because it seemed like a cool, teenager-y sort of knit.  I so hope I'm right.  It hasn't been blocked - in no small part because I think it'd take forever to dry, and we're finally having some coolth around here, so I thought she might want to wear it.  I'll ascertain whether I'm right and then find a time to block it - maybe that'll improve the drape?

The cables are cool, though. 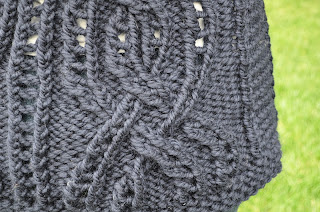 I should be more enthusiastic about this one, I know.  It's the color she wanted, and I'm pretty sure she likes it.  I think that this particular knit just combined too many elements of which I am not fond, and, frankly, I was totally underwhelmed by the pattern-writing.  I kept wondering where IK's tech editor was on the day they finalized it for print (and I know enough to know that this may have nothing to do with the designer's original pattern-writing skills).  There were a lot of bits in there that just made no sense whatsoever, and I admit to being pretty glad that I was able to "read" the cables to see where things were supposed to be going.  That said, I think that the design itself is very nice; I particularly like the waist join (as I mentioned), and the designer does a nifty thing under the arms, in which one picks up the purl bumps just below the stitches used for the two fronts as part of the back - it's a nice way to create an overlap under the arms that tightens things up and looks clean. 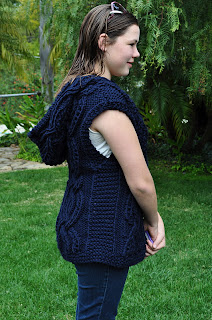 I think you can see it there.  But you can also see how bulky this is!!

OK, I'm over it.  I also finished a project which is the exact opposite of this one in every way. 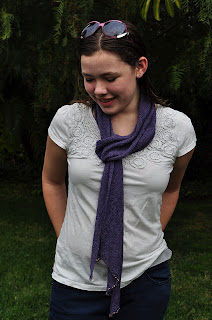 (In spite of how happy Older Daughter looks wearing this, it's mine.)  Actually, to be fair, I'm only halfway done.  This is the Churchmouse Bias Before and After scarf, and it's intended to be a pair, which can be worn together or separately, in two different colors (my second color is a gorgeous teal green).  The ends are beaded, which adds a lovely weight to what is otherwise a weightless (but warm and soft) scarf.  And, as promised with this pattern, it is ugly (really ugly) during the knitting, but the blocking changes everything. 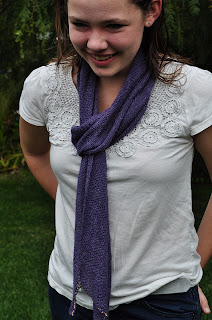 It's knitted out of Cascade Alpaca Lace, on size 6 needles, and it's one of those knits that's boring boring boring in execution, but which I know I will wear endlessly. 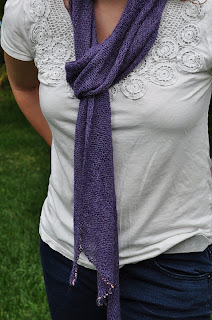 If I can get it away from my daughter.
Posted by Knitting Linguist at 12:13 PM

The Bias Before and After scarves are on my to-knit list, and I think they may have just leapt ahead in the queue. I don't have much of a brain for complex knitting at the moment and need things I can drop and pick up without much fuss.

While I love the vest, I share your concerns about it...I hope her height will help. My Helsinki, if I ever finish it, is bulky, soft, warm, and CABLED. I have the same fears about it.
;)
Love the scarf! And oh, can I say you're just being so darn good on this "plan" of ours...so did you break under pressure and order the yarn for Rams and Yowes????
(((hugs)))

That vest is stunning. The waist! the hood! The cables! Just wonderful.

I have only recently been converted to the joys of thicker yarns, so I understand your concerns. It's a different world. I'm now comfortable using bulky yarn on #13 needles, but super bulky on #15 or #17? Not yet. I don't even own any needles that big.

I hope you're planning to link your Ravelry project pages for these two items back to this blog. Lots of valuable information for anyone thinking about the project who wouldn't necessarily think to look at your blog.

Both items are lovely but I long ago gave up on bulky - it's just not cold enough here to wear it. In fact, I rarely wear my collection of DK sweaters - air conditioning has a lot to answer for!

Cant' wait to see how the two scarves work together (you may have to make four or even six! LOL)

I love the features of the vest, but like you I don't think I'd ever wear it. But on OD, it looks great. I think my younger daughter would like it. I'll send her over to look at it.

But the scarf(ves)! Oh yes! Love at first look!

I'm not a huge fan of chunky knits (even though I'm making one right now...) but I do love that detail on the front!

The scarf is beautiful too!

The cable is beautiful! I like chunky knits...on other people. They often look very stylish and snuggly when someone else is wearing them, but I end up feeling like the abominable snowman if I do. It looks good on OD, though!

The scarf looks like an all-the-time wear. I love being able to throw on a light scarf and be "dressy" on occasion. =)

Great close-up pictures of the details and your observations. It looks good on her! Don't you love having your daughter towering over you? :) She'll never be plagued with the challenges we limited-statured people face.

I do love the cable join at the waist, very stylish. It really suits her
My youngest loves standing in front of me and telling me he's taller than me, lol. He's taller than his older brother too, which definitely doesn't go down well.

I can see why you have concerns about the bulkiness of the vest, but at this stage of her life if OD isn't worried about that I would knock on wood and move on! I've made a couple of things recently on #15 and #17 needles and I like the effect (jury is still out on whether I like it enough to keep choosing such projects/yarns). I do think you're going to have a fight on your hands getting the scarf back, and I don't blame her! It's gorgeous.

I don't enjoy knitting the super chunky yarns myself, and share your feeling about the final project. You hit the nail on the head, that it feels like it is wearing me. And I am tall and live in a cold climate, but it still feels that way.

LOL! I think you may have some trouble with that scarf. Your daughter looks *very* keen on it.

I kind of know what you mean about bulky knits- most of us don't need extra bulk! But I love the big cables and the clever join. (And living in a cold climate? Bulky has its place. Today I'm wearing a heavy wool jacket that my mom made me. And I still had the heater going under my desk this morning. It was 6 degrees F when I came in. Brr.)

That cable cross at the center is genius. I love it!

And I have that Cascade alpaca lace in that color. Gorgeous scarf. I might finally get to that yarn now, thank you!

I think the vest is super cute, bulky is VERY in right now. Pair it with a black mini skirt, tights and some uggs and she'd fit right in on our campus. I assume those are probably NOT words a mother wants to hear...but there it is, she looks so grown up!

That is a totally cool design feature!