Today's post: Our second summer trip, a knitting project (almost done), a spinning project (done except for soaking), and a few more bits and pieces.

Our second trip of the summer was to the Upper Peninsula of Michigan, where my SIL has family, and where her family was kind enough to give us all a place to stay for the better part of ten days.  It's hard to go wrong with a view like this: 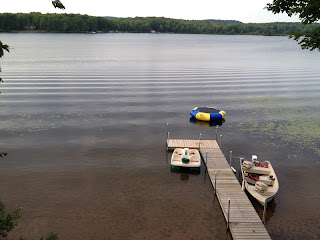 The kids loved it - they could pretty much do what they liked, when they liked, so they spent lots of time in the water, canoeing, kayaking, swimming, or just hanging out. 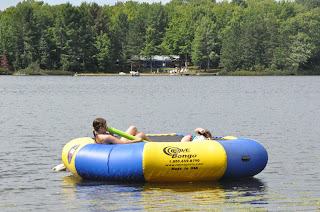 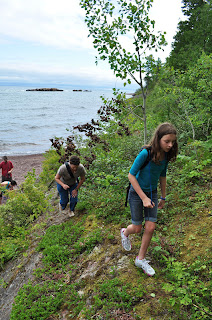 And went to Lake Superior. 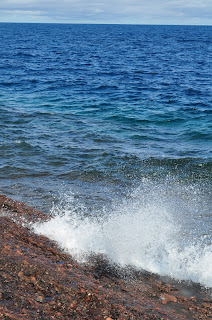 Lake Superior never ceases to amaze me.  It's just so...big. 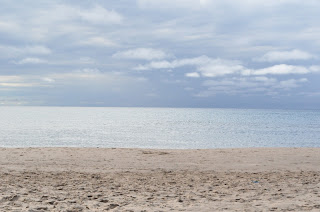 And really, really cold.  Which didn't stop the girls from going in. 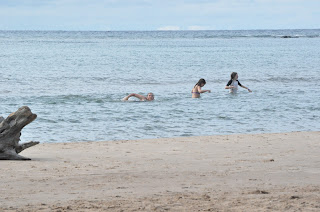 Brrr...  I preferred playing with rocks. 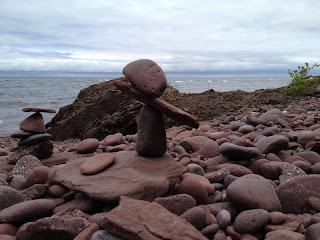 Oh!  And I learned to drive an outboard!  No photographic evidence, though.  (I know, this is not a big deal if you are a person who grew up around lakes, but I didn't.  So it was.)

It was an awesome week.  We do not get to spend enough time with Rick's brother and sister-in-law, or with our niece, so having a whole week together (and we got to have our niece out here with us for ten days before that!) was an absolute treat.  Younger Daughter and our niece get along like a house on fire, and spent three weeks together happily.  Do you ever have the sense, even as something is happening, that this is one of those things that your kids will remember later?  That's how I felt about this trip, and about having our niece here beforehand; days at the beach, going to the movies, boogie boarding (an achievement for my niece, on the list of the summer's achievements - she got really good at riding those waves!).  I always feel lucky when I recognize those moments even as they're happening, and so get to feel grateful both for the moment, and for the memory that it will be. 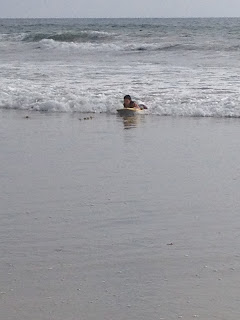 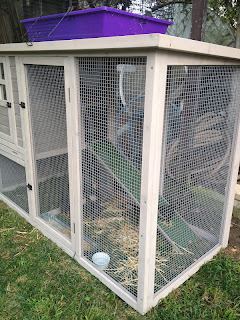 This is an older photo; they now have all their feathers and are, as of today, probably ready to start living in their coop full-time (until now, they've spent nights in a smaller cage with a brooder lamp on them).  I should also say that the girls did nearly all of the building work on the coop, too, working from the directions that came with it.  They're pretty proud.

As for me, I picked up a long-languishing sweater, with which I am (finally!!) almost done.  I started it last summer, when I couldn't talk about it yet.  But the pattern is out, so it's fair game, and I'm almost done with it (hooray!).  It's the India Print Henley, by Anne Hanson, in Ann Budd's new book The Knitter's Handy Book of Top-Down Sweaters, which I think I will have to get.  I don't have a picture of the whole sweater yet, but here's the body: 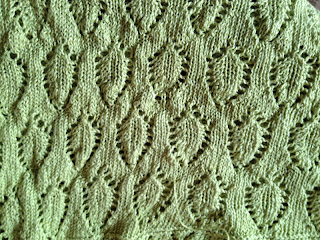 I am finishing the second sleeve now, and then it's all done except for weaving in the ends (I already did the button bands and collar).  I'm pushing it hard on the yarn (which is why I did the button bands, etc, before the sleeves, figuring if I had to go to 3/4 sleeves, that would work), but I think I'm going to make it.  The pattern is fabulous, but what's slowed me down on this sweater is the yarn - I'm knitting it from Fibranatura Flax, in a lovely lime-green color.  I know I'll love it once it's done (I already washed the body, actually, because it looked too big, and I wanted to be sure that my swatch wasn't lying to me before I knitted the rest, and it's softened up beautifully), but it is tremendously hard on my hands to knit with, and it makes all the muscles in my shoulders tighten up.  So I haven't been able to make myself do the kind of marathon knitting that I usually do at this stage of sweater development.  Today may be the day, though.  I'm sooooo close...

Last weekend, I also got through a spinning project that I have long been contemplating, with some fiber that I bought nearly two years ago at Lambtown. 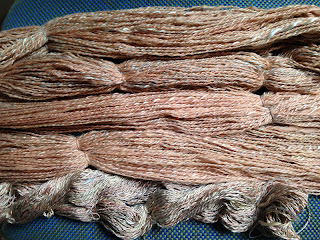 Lovely, isn't it?  That's a two-ply yarn, heavy fingering weight (I think - it still needs to be washed).  One ply is spun out of 100% Bombyx Silk, dyed by Dreamy Goat Design Studio with natural dyes, and the other ply is spun out of a superfine merino/bombyx/tussah blend, also dyed by Dreamy Goat Design Studio; both were spun worsted.  I spun the 100% silk from the fold, which I guess means it's not a purely worsted-spun yarn, but it helped tremendously with drafted and control.  What you can't see in that picture is that there are shades of green and blue in among the more dominant osage orange.  I love it.  It looks antique.  There were 2.5 ounces of the bombyx, and 2 of the blend, so I had some silk left over, which is spun up in that little skein on the bottom.  I have about 400 yards of the mixed two ply, and a bit less than 100 of the pure silk two ply.  I will need to find some kind of beautiful shawl pattern that will allow me to put in the occasional row of the 100% silk, don't you think?

And that's nearly all the news that's fit to report.  Last Monday, Older Daughter started her sophomore year in high school (!!), and Younger Daughter started middle school (which is grades 6-8 here), and I took over as department chair (probably best not to talk about that, but let's just say that "congratulations" is probably a less-appropriate response than, "ooooohhhhhhh.....").  Tomorrow, classes start.

But today, the sun is shining, I have some chicken wire to buy and make into a portable run, and a sweater to finish.  It's all good.
Posted by Knitting Linguist at 12:32 PM

You are ahead of me; my family has had a house on a lake for more than 30 years and I do not even know how to turn on the motorboat. My three sons are pretty good at it, though...

There is so much on which to comment here...let me just say, "CHICKENS!!!!!" Hurrah that the young ladies are also starting their foray into coop management. We will have to compare notes as we progress.

P.S. Loved the last two posts...and am catching up on our blog as well.

Yes, making memories and begin aware of it at the time is priceless.

NOooohhhh--yeah, in a conversation with The Prof. I asked, "Do you want to be chair?" Mono-syllabic answer: "No." Best of the best to you in this endeavor.

I'm going to look into that Ann Budd book--top down sweater with NO seams for me!

The spinning and the knitting are wonderful, the lake memories are beyond wonderful. Thanks for sharing them, and sharing the idea of making memories over lazy days together without the rush of modern life. I believe you gave me a micro-vacation just in the reading of it!

And congratulations on the chickens and ooooohhhhh.... on becoming department chair.

So great to read your update! Hurray for summer memories and friendships witch cousins (special bonds indeed) and chickens and building chicken coops. Sounds like a well done summer.

Sounds like a good summer - relaxing, knitting, spinning, hiking and learning to drive a boat!! Best wishes to all for new starts!

The photos look fabulous.
We acquired three hens over the summer, the boys are eagerly waiting for that first egg. The girls will love them

You got chickens!!! I am so happy!! Our new ones should be laying anyday now!!!

I love those 'making memory moments'. I've thought a lot about that this summer, with the new house. It's quite amazing to actually see it....

great catching up on you!

So many good things! I fondly remember spending a week with a girlfriend and her family at a lake in northern Indiana.

The sweater is lovely. I am always amazed at how much knitting you are able to do.

And chickens! Just wait until you start getting eggs!

Wow. I'm so glad you have such amazing memory-making stuff. And chickens. heheh.
They're making me squee, of course, but I've been told, "NO chickens..." so I'll live vicariously thru you all, and my boss who just adopted ONE. Only one. We'll see how long that lasts...
(((hugs)))

So many wonderful things. I'm so glad you got to take some time off by the lake, and to really enjoy those memories being made. Beautiful yarn, beautiful sweater, and yay for chickens! Congratulations to the girls; that looks like a first-rate coop to me. =)

Wonderful summer memories - and I love Lake Superior. It is big. And cold. Really cold. I got Ann Budd's book as an ebook for the ipad I got myself. I'm not sure about ebooks for knitting books. My personal jury is still out, although our book will be an ebook this fall. Department chair? How about hmmmmmm....

Ah, department chair. This is one of those 'honors' that means five times the paperwork, twice the meetings, many times the aggravation, and exactly the same salary, isn't it?

Your vacation looks like enormous fun, and silk is fabulous! I look forward to seeing the shawl.

What a wonderful summer of good memories! Good for your girls not only braving icy Superior (I've "swam" in it, brrrrr) but in building the chicken coop! They earned the right to be proud of their work!