I can't be the only faculty member on the face of the earth who counts down the weeks in the semester, right?  There have been many semesters when that countdown seems to go. so. slowly.  Not this semester, though.  This semester, thetimeisflyinglikeaperegrinefalcononspeed.  It's the middle of week four already.  How did that happen?

Part of it, I think, is trying to get used to the new job I'm doing.  I don't yet seem to have in my head all of the categories of things I should be tracking.  I knew what I had to keep an eye on before (have I done my class reading?  am I caught up on grading?  need to work on that paper I'm presenting/chapter I'm writing/research I'm doing, etc etc), but it's a whole new world now - one which includes things like: build the spring schedule - eek!  So I'm working on that.  The biggest sorrow, from my perspective, is that the number of meetings I attend each week has ramped up exponentially, and the percentage of them in which knitting is not an option (either because they're too small, or because I'm running the meeting) is much higher than I'd like.  So, more sitting in rooms for hours on end, less knitting.  Sigh.

I am still trying to get in a little bit each day, though, and that means that I've finished the back of Scoria, and am working away at the front.  I have no pictures, but I am making progress.  Mostly in the evenings where I'm either watching Eureka with the girls (love that show) or Firefly with Rick (also, unexpectedly, really love that show) - hooray for Netflix!  I have also found some time to work on a very very plain sock (perfect for movie knitting, and, I hope, also for meetings where knitting is only marginally appropriate, and must be very subliminal). 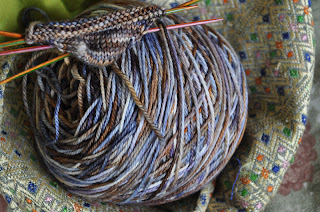 I'm actually much further along on that; I'm done with the foot and about to start the heel flap (even on my toe up socks, I am as likely as not to knit a heel flap; there is some small possibility that I might do one of the sweet tomato heels I learned last year from Cat Bordhi - I need to decide).  This is a gorgeous bit of yarn I picked up the other week at Yarning For You; I think it's Zen Yarn Garden sock yarn, but I'll check to be sure.  The plan is to knit a simple foot, then a corrugated rib leg, so that they feel like really luxurious thermal underwear socks.  Mmm...  Comfort knitting at its purest and best.

Other than those two projects, I haven't been working on much.  There's been no spinning (and I miss it), and I haven't had a chance to take a picture of or cast on for the really big project I got some yarn for last week.  With luck, that will happen before my next post.

So that's it, just a drive by posting to say that I'm still alive, still knitting, and that I'm actually, for one brief and shining moment, caught up on grading and class reading.  Does this mean I can knit with my wine tonight?

Posted by Knitting Linguist at 5:25 PM

You may knit and wine tonight -- but don't try any fancy knitting!

I hope the new job is not causing you too much stress which can't be relieved!

If you really want to throw your schedule off, join us up here at one of the CSU campuses on the quarter system. We don't even start classes until the middle of next week, and then it is eleven weeks of sheer craziness that fly by in an instant.

I also love the show Eureka. Just the right combination of quirky and geeky. I just wish Netflix would get around to sending me the first disk of its last season. The "very long wait" has turned into a delay of monumental proportions, and my patience is wearing thin. I might actually have to purchase a few episodes on Hulu.

My knitting in meetings has come to a screeching halt too. Too many admin changes, don't know how it will go over yet.

Much love for the new work stuff. I hope it's good overall, and doesn't wipe you out. (optimistic? not so much these days - sorry!)

And that's a very pretty sock, whatever the yarn.

Oh, you're definitely not the only one! I had a catch-up day today, thought I was doing really well and was getting all proud of myself for being ahead, and then looked at the syllabus. Exam one in 5 class days...eep! I have no idea how time is going so fast, except that time spent firefighting tends to fly.

Boo about the no-knitting meetings. I hope you find a new balance soon!

I do love Firefly. I'll have to check out Eureka. I was in a loooong no knitting meeting today. No knitting makes it much longer.

I'm with Mary Lou- Firefly rocks, and I must check out Eureka.

And knitting in meetings is never appropriate in my workplace. Sigh. Occasionally I can sneak some in while I'm on a conference call or waiting for a database query to run.

On the plus side, if you're running the meeting, you can write an agenda and keep to a schedule, which is harder to do if you're only an attendee. :)

Make sure you get "Serenity" the movie sequel to "Firefly". It ties up loose threads. Man, I wish they had kept that show going!

I know how you feel - I can't believe how fast September is going!

I believe you just finished week four, correct? Why would I be counting? :)
And you are doing better at reporting on your knitting than I. Hopefully, I will be back in blogland soon.

Girl knit with that wine. (I hope you did)
LOVE the colorway of that sock yarn. LOVE.IT.
And just gonna send you (((hugs)))

My head is spinning from only reading all your responsibilities!

Definitely grab those moments to relax with a good glass of wine and a bit of knitting.

The sock yarn looks lovely, as will the sock. And clearly I'm out of control, too, taking so long to comment on your post. With everything going on, all I can recommend is don't forget to breathe.

Wilson and I happen to be watching Firefly right now, too. We like it more and more with each episode. I think I am going to try to work up a Cailey (sp?) costume this Halloween.