I'd meant to post about my new learning experiences last Sunday, since I had a weekend of some very productive new learning, on both work and fibrous fronts.  But one of the new learning experiences is best conveyed through a short video of me engaging in my new-found fun, and I didn't have a chance to get me, my tools, a videographer, and a machine capable of videotaping all into the same space at the same time until today.  Now that I've do so, today's post involves a quick knitting update and some spinning fun.

I should mention first that one of the new learning experiences involved my fieldwork, and it means that we can move forward with a big task that we've been planning for some time.  Last weekend, one of my work colleagues and I headed up to Tehachapi to spend the day getting our heads around a transcription program called Elan (available for free through the Max Planck Institute).  One of our huge goals for Kawaiisu (the language whose speakers and learners we're working with on documentation and revitalization) is to gather high-quality audio- and video-recordings of conversational speech among the three remaining speakers, and then (and here's the really tough part) creating equally high-quality and detailed transcriptions of those conversations.  That, in essence, involves creating a word-perfect transcript of everything everyone says, whether they're speaking Kawaiisu or English, including an indication of when and for how long people are speaking over each other or interrupting each other, etc (with as many as six people involved in the conversation at any one time).  That alone is incredibly intensive work.  But these transcripts then need to include a breakdown of all of the meaningful pieces of each word spoken (called morphemes - not to be confused with morphine, even though people often want some during this part of the process), then providing a gloss for each morpheme (i.e., its exact meaning), then a translation of the sentence.  It can be incredibly hard to organize all of that data into something usable, and very few programs exist to help with that.  I've used Word tables in the past, but Elan looked like it was going to do the trick.  And I think it will - but it took three very smart women five solid hours to get it set up and ready to go (after some prior weeks of processing time separately), and in a few weeks, we'll head back up to train all the transcription teams in its use.  We felt pretty darned smart at the end of our work session, I have to admit, and very excited about how fabulous this level of documentation has the potential to be, both for the purposes of revitalization (the number one purpose), and also for understanding how this language works even better than we already do.

With that level of accomplishment under my belt, I decided the time had come to finally give a new spinning technique a shot.  In the Summer 2012 issue of Spin-Off, I spotted a really interesting article called "Navajo Ply on the Fly", by Rosemary Thomas, in which she describes Tammy Rizzo's technique for both spinning and plying on a spindle, in one pass (in other words, no need to spin all the singles for a yarn, and then ply).  I read about it, and tried to visualize it, and mulled it over for quite some time, and then re-read it, and mulled some more (this is how I tend to learn anything new). Once I'd gotten my head around it (and I admit, I found Rizzo's sidebar made more sense to me in some ways than the version described in the article), I sat down to give it a shot.  I fully expected to make some very serious errors in my attempt - after all, it's a new technique, and (in spite of the caveat that one ought to be familiar with Navajo plying before trying this) I'd never Navajo-plied anything before (oops).

Nope.  This technique makes so much sense, and is so intuitive, that it just happens.  It's more fun than a basket full of kittens, quite frankly, because you spin an arm's-length of singles, chain-ply it and add plying spin, wind it on the spindle, and off you go again.  It's a funny thing to see when you put it down - a spindle full of three-ply yarn, with a length of singles and fiber hanging off the end.  It's harder to describe, I think, than it is to do or see, so this morning I grabbed my iPad and my older daughter and asked her to record me doing it (sidebar note: does anyone else still call that "taping"? I do, and my kids always look at me funny).  I expected that to take a few tries, too, but it turns out she's a natural at this, so here it is.  It's my first effort at this kind of thing, so please let me know what you think.  (And again, because I am big on citing my sources, let me be clear that this is not my technique.  It is a combination of what Thomas shows in her article with what Rizzo describes in her sidebar to the article.)  And if you're a spinner with spindles - I highly recommend giving this technique a shot.  Note: because it's a big file to upload here on Blogger, I've put it over on YouTube - the link is here.

I've also been knitting away at Scoria.  I hadn't thought I'd finish it so quickly, but the front, back, and sleeves are all done and blocking, and I'm knitting the neck right now.  It might even get seamed tonight, depending on drying time, and whether this neck knitting goes quickly.  That would be great, since tomorrow, we're heading up to Burbank (yes, during Carmageddon II, alas) for one of Younger Daughter's feis, so not a good day to being doing things like seaming (although it will be a good day for simpler knitting, of which more in another post). 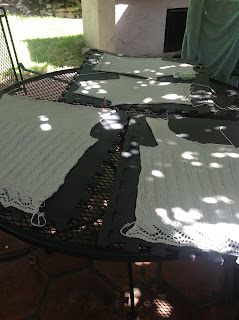 There are all the pieces, waiting to dry. 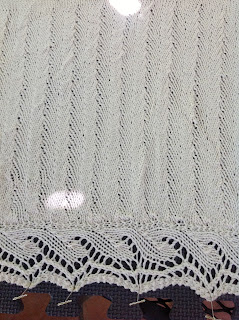 I am pleased with the combination of yarn and pattern.  The yarn is Plymouth Vita, and it's got a fabulous hand - very cushy, and not as hard on the hands to knit as cotton and cotton-blend yarns usually are (at least for me).  (The 15% cashmere probably doesn't hurt.)  I was very worried about having enough yarn, and cut the sleeves a little shorter than they already were, but it looks like I'll have enough, which is a relief. 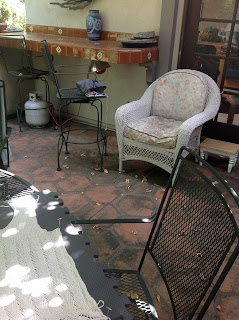 And now, I will adjourn to my knitting chair to work on that last piece.
Posted by Knitting Linguist at 2:54 PM

It looks so pretty, even if it's in pieces.
Your work project sounds so fascinating. So sad to think there are only three speakers left.

Yay for new learning! The spindle plying sounds a lot more fun than learning the new software, but a good tool is priceless in research, and well worth the effort. Hope it ends up doing exactly what you need!

I understood more about the morphemes than I did the Navajo ply. NP is just not intuitive for me. I think I need to take a class, watch more people...

Are you planning to attend Seaside Highland Games in Ventura in October? I'll be there spinning.

That ply-on-the-fly is amazing! As soon as this next heatwave passes through I'm going to give it a go. I much prefer spindles to wheels, but plying on a spindle has never been much fun. Many thanks for taking the time to video the technique.

I've been practicing walking while spindling...may have to add this to the process. So cool!

Nice speed work on the sweater too!

Fantastic video, loved how clear it is when shown, when I read the article it 'made my head hurt' but seeing you spin and ply makes total sense, I'm off to find fibre and spindle now .....

Navajo Ply on the fly is marvelous and is one of the classes I will be offereing at my online store launch in a week or two. I love spinning and have learned every technique I could get may grabby hands on.

You made that look very easy! I don't spin but it made a lot of sense. I have a Russian support spindle which I don't know how to use - can you use one?

I love the border on the bottom of your current knitting project.

Yours is the best demonstration video I've seen on how to chain ply on the fly. For the first time I want to do this. :)

Hooray for your dedicated work on making Elan do what you need it to do.

We really are wired to learn. I'm glad you are having such a good time with all of it!