OK, only three days off from my intended post.  I keep meaning to stick to posting on Sundays, but this last Sunday I spent getting a lot of pre-holiday shopping done (mostly the kinds of things that need to be made in advance or sent in advance), plus finding a pair of black slacks for an event that Older Daughter had to attend last night - can I just say that it's harder to find black slacks than you might think it should be at this time of the year?  (Can I also just say that it is perhaps time for Older Daughter to stop growing?  5'8"+ seems fairly reasonable to me, it's not like I'm asking her to stay at my 5'(ahemalmost)3", right?  Surely she could just take up coffee drinking like a normal teenager and we'll call it good?)

I've been postponing posting under the theory that it would be nice to have pictures of my finished and ongoing knitting, but I also realize that the chance of me and my camera and my knitting all ending up in the same place at the same time is pretty small right now, so I'm going with what I've got.  I did finish the second Wine Dark Sea sweater, so I'll try to get some pictures of that this weekend to post.  I also cast on for a pair of socks for Younger Daughter for Christmas, and I'm almost done with the first one.  They're just plain old socks, out of very colorful yarn (and, therefore, mismatched), just the way she likes them.  Holiday knitting this year will be minimal - socks for Younger Daughter, a hat (more on that in a moment) for Rick, and the beginnings of a sweater for Older Daughter (I got the yarn, and as she has not yet picked the pattern, I figure I'm not responsible for not having cast on yet, right?).

As to the hat, that will be knitted out of these two skeins of happy handspun. 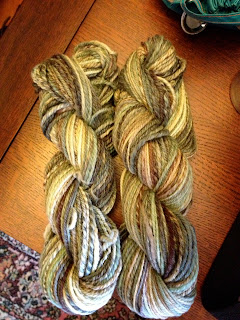 Isn't that pretty?  That is spun from some gorgeous fiber, hand-dyed by Erica, who does amazing things with color (which you can't see well, in that washed-out photo, but more this weekend, I promise).  I liked the colors so much in this one that I didn't want the whole thing to turn out barber-poled - I wanted some of those colors to stay true, so I tried something I've never done before.  I spun the singles woolen, and then I chain-plied the whole thing.  I am delighted with the way it turned out.  This is probably the squishiest yarn I have ever spun - the skeins feel like marshmallows.  The colors will look very nice with Rick's eyes, so I offered to knit him a hat out of it.  He has requested something warm enough to ski in on cold days, so that's the plan.  The hat will need to be double-layered, but he suggested that he would be OK if the lining were knitted out of something else, in case there's not enough yardage.  I'll wind it up tonight and see what it looks like, but I really can't wait to cast on for this one.

Other than that, I've been spending as much time as possible outdoors.  A friend (who shall remain unnamed but not blameless) turned me on to Instagram, so I keep posting pictures of all the outdoor time I'm getting - something to do with my constant phone photos!  (If anyone else is on Instagram and doesn't mind a daily dose of outdoorness - or an every-other-daily-dose - I'm Knitting Linguist there, too.) 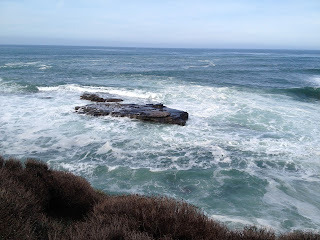 The ocean at La Jolla on Saturday had me dying to cast on for a sweater in the seafoam green yarn I got myself last summer.  Soon...soon...

But the most exciting event of the last little while was last night.  A few years ago, a dear friend of mine told me about an amazing program here in San Diego, called BEWiSE (Better Education for Women in Science and Engineering, I believe), whose goal is to get girls involved in science and technology earlier in life, so that they're comfortable pursuing careers in those fields later.  Older Daughter applied and got in, and since then, she has had opportunity after opportunity to participate in truly amazing workshops.  This August, the best one of all came along, and she applied and was accepted.  Fifteen girls are (get this) building a micro-lab which will go up to the International Space Station.  Inside that lab is an experiment that they have designed and implemented - the goal being to observe some phenomenon in micro-gravity.  There are only a handful of other schools doing this.  The girls decided to grow alum crystals to observe the effects of micro-gravity on the structure of the crystals, and they're working on their prototype lab right now (these labs are 2 x 2 x 4 inches).  It will be sent up to the ISS in March, and when it comes back down, they'll be able to examine the crystals under an electron microscope.

Dudes.  She's designing and implementing an experiment that's going into SPACE.  For real.  Does it get cooler than that?

Apparently, it kind of does, because last night, the organizers of this project hosted a celebration event at UCSD's CALIT2, where not only did all sort of people who are heavily involved in advocating for science and technology education in the US come to speak, but there was a member of the astronaut corps, Dr. Yvonne Cagle, an amazing woman who spent 15 years as an MD before realizing that her dream was to be an astronaut, and then pursuing that dream.  That woman stood up in front of our girls and called them an inspiration.  I think it was a mutual admiration society, because you could see them light up when she stood up there - a woman who had gone before them, paving that road and making it a little clearer, a little easier to walk. 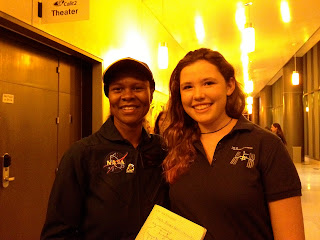 I don't even come close to having the words to say how thrilling it was, how proud I am of my daughter, and, when I saw those pictures of that astonishingly beautiful structure out there in space, built by people of often-warring nations, together, how much hope I have for humanity.

Posted by Knitting Linguist at 11:05 AM

OMG how AMAZING!! Seriously, OD's experience with this and your description as a mother made me CRY!! I am so happy for your both to have this experience! What an amazing thing!!

What an amazing experience, something that none of you will ever forget

Ack! Weepy! In the good way of course. Sounds like a great program for Older Daughter!

Thinking of space, have you seen this? http://www.theatlantic.com/infocus/2012/11/2012-hubble-space-telescope-advent-calendar/100415/?utm_source=Sailthru&utm_term=Very+Short+List+-+Daily

Oh man (or maybe girl), I was getting goosebumps reading about what Older Daughter is doing. That is seriously awesome!

What a wonderful and unique experience your OD is having! Congratulations to her!

BTW, she may be growing taller but she also becoming more beautiful and more poised if that photo is anything to go by!

That is a wonderful story. I just bought something on Kickstarter called Goldieblocks, created by a female engineer for young kids. She lamented having no exposure to such concepts, and loves being an engineer so much so wants other girls to do it. Of course, now I have to wait for my great niece to be old enough to use it.

Your daughter is so lucky! That is so cool!
Nice yarn too - looks so warm!

Space station experiments sound pretty cool to me! (She'll also love the electron microscope.) Crystals are a good choice, too.

Love the way the yarn came out. Is that the Rambouillet from Rhinebeck? Rambouillet is the squishiest stuff I've spun yet...

These programs are so important, and I am so glad your daughter has this opportunity. I wouldn't be an engineer except that some forward thinking high school teacher pushed me into a simple week-long camp; with a program like this plus your daughter's initiative and brains, the future possibilities are amazing!

The yarn is lovely, btw.

So many things to love in this post! That handspun is gorgeous. And the program your daughter's in sounds truly awesome. Yay for encouraging women to get into science, and how cool would it be to have something you made go to space?! I hope you share the results with us when it comes back down to Earth.