In which I am tired of mushy food

Note: I am, for the first time, trying the Blogger app. I am finding the picture-adding feature unintuitive in the extreme, so all the pictures associated with this post may end up at the end. Not sure what I think of that...

It has been quite a couple of weeks. We did, as planned, go to Mammoth the weekend before last, and, as hoped, the skiing was really, really good. It was cold, though. From my perspective, it was really cold. Mostly in the teens. I think that should count as cold. (It was actually 1 degree out when we drove by the airport, but we didn't stop to get out of the car. You might be able to imagine why not.)

Rick kindly agreed to take the daylight part of the drive so I could knit mitten thumbs (I succeeded in finishing the hand of the second mitten the night before we left), and by the time it got dark, I was *this* close to finishing the second thumb. In fact, I was so close that Rick kindly let me put the dome light on for the last 20 minutes of knitting. As a result, I had mittens when we got up there, dangly ends tucked inside. (Refer to photo of mitten backs here.). And the best bit? The antlers! (Refer to photo of mitten palms here.) The girls were wildly amused by the fact that I was so amused by having antlers at my disposal.

These really are fun mittens in many ways. I am not sure how well they would serve for extended periods of outdoor wearing in truly cold weather, but they were perfect for doing around-town things in the cold of Mammoth. And they have been very useful to me of late in the mornings around here (which have been in the mid-30s, temperature-wise), especially when driving. A winter or two ago, I developed Raynaud's syndrome, which sounds more impressive than it is, and which involves having the tiny blood vessels in my fingers or toes suddenly squeeze shut, resulting in strange, bone-white numb places. The treatment for Raynaud's is to avoid triggers, and for me, the number one trigger is holding a cold steering wheel. These mittens are a big help in that area.

I would change only two things, one small and one large. Small: I would knit a longer cuff, before the second Latvian braid. Large: I would rejigger the thumb to have it coming out of the palm. The pattern is written so that the thumb grows out of the side seam, but thumbs (at least my thumbs) do not come out of the side of the hand, so these have a tendency to pull around, moving the seams off the edges of my hand, and de-centering the lovely antler pattern. If I had to do it over, I'd probably do an afterthought thumb on the palm. To be fair, I am guessing that the reason why the pattern-writer didn't do that to start is because it's not really possible, per the usual Scandinavian mitten of this sort, to blend the thumb pattern in with the palm pattern, given the fun antlers - hence the non-interfering side-seam placement.

Since coming back, things have been rather insane. Department chair work has come crashing down on me in the form of schedule-management, and I am also working on my course syllabus. At the same time, I had my two bottom wisdom teeth pulled on Friday morning. I will spare you the details (although I was awake for all of them - local anesthesia all the way, baby!), and I will say that I have been remarkably lucky in my recovery. The pain wasn't bad at all (really, more discomfort), the swelling wasn't bad, either, and really, the biggest bummer is that I am just sick and tired of squishy food!! I want to CHEW something!

But I was recovered enough that on Saturday morning, the girls and I were able to start our big holiday present: horseback riding lessons. (Pictures of girls on horses here.) I know that I will write more about this as we go, but learning to ride has been something I have wanted to do since I was a child. And the girls, too, have asked, and dreamed, and hoped, and I finally decided that this kind of time-together, shared-experience gift is exactly the sort of thing that I value, above any stuff, and did my research and made the commitment. One lesson was enough to tell me I did the right thing. Number 2 is tomorrow, and we are all three really looking forward to it.

I have also finished the Shattered Sun shawl, although it is not yet blocked, but I think that is for another post. 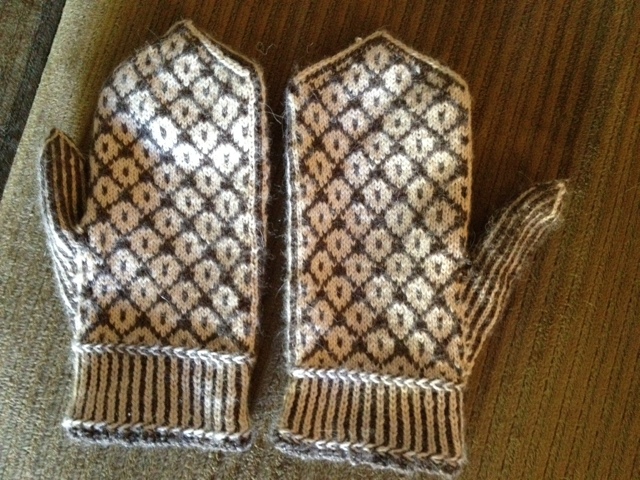 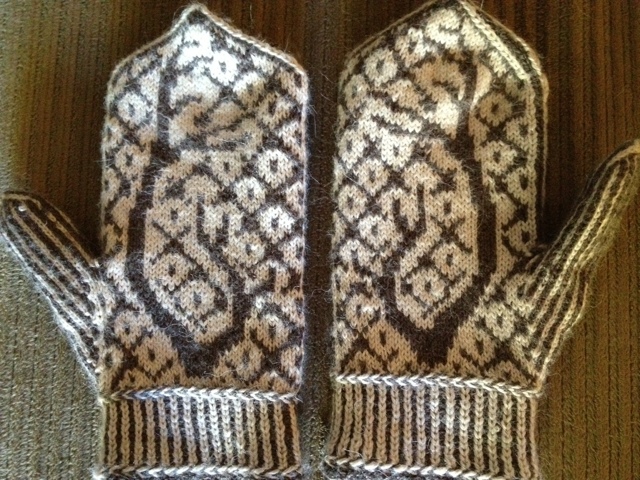 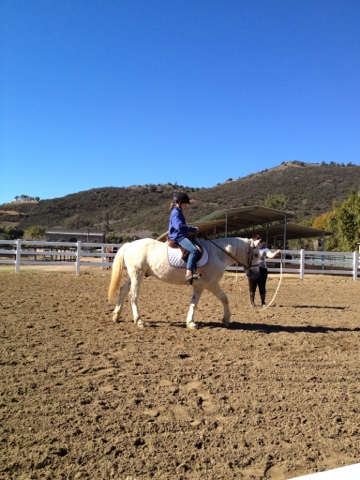 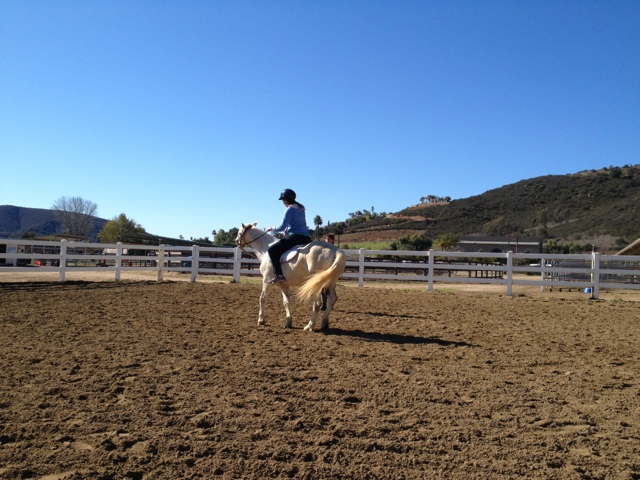 Posted by Knitting Linguist at 9:04 PM

I do wish that people who change things would stop. It's confusing. I understand that if they don't keep changing things, they can't justify their jobs. But I still wish they'd stop. There are many other things I'd rather do than spend my time relearning to do something that has always worked before.
Lovely lovely mittens! They look toasty warm and will be fun to wear when horseback riding on winter mornings.
I know about Raynaud's. My mom had it, all of my children and I have it in varying degrees (pun intended). My worst is icy-cold items from the fridge. And steering wheels.

So glad the second mitten was finished in time, I'd find excuses to wear them all the time.
I'm wincing at the thought of the wisdom teeth, you'll really enjoy your first chewable meal
http://www.loopysplace.co.uk/blog.html

My DD nagged and nagged (excuse the pun) for horse-riding lessons form the time she was six. We ignored her, all girls want to ride horses when they're six! A friend of ours was a champion rider, he warned us that it would cost us a fortune so we continued to turn a deaf ear! By the time she was twelve, having tried swimming, athletics, physical culture, netball, dancing and tumbling, she was still nagging but now we took her seriously! She rode until she got a job, aged 15. We were lucky she never got into competition mode for dressage or show jumping -- horse riding clothes are Very Expensive here!

Your mittens are lovely and I'm glad you got them finished in time! I've never thought about mittens and thumb placement -- probably because I've only ever knitted one mitten. It is also stranded colour work and the thumb comes out the side! I plan to knit the second mitten next month as part of my "2013: The Year of the Finished Project" Linky party.

DD had all four of her wisdom teeth removed under general anaesthetic and was sitting up eating ice cream when I arrived an hour or so later! We had to wait a few days to celebrate her 20th birthday -- the operation was done just days before!

I wish you all the best as you return to work and hope the load doesn't overwhelm you.

Horsemanship lessons! What a cool thing to do with your daughters! I'm not so secretly jealous.

Bummer about the Raynaud's, I suffer from it as well. Cold steering wheels, shift knobs, door knobs and any time the weather starts dropping below 60F. More problem with fingers than toes. Even fingerless mitts help, and I find that running warm water over my wrists can help restore blood flow.

Antler mittens: I've followed your blog long enough to put money on you. Especially now that you've knit a pair. I bet you can totally reconfigure the antler shape so the thumbs end up in a more practical location. Good Luck

The mittens are beautiful!
I feel your pain on the wisdom teeth. I had all four done at once (not gettin' me in that chair a second time, no-way, no-how!) And lukewarm scrambled eggs have a really limited appeal. On the plus side- all the shakes you want!

And for your nighttime-car-knitting pleasure. LED book-light. I love it, especially this time of year when it gets dark before 5 pm in New England. I have the kind with a clip and a flexible neck. You clip it on the book when reading, and clip it to the seatbelt or your jacket (or both) for knitting. Angle the light away from driver, and knit your way through long tedius car rides!

Well, that was very, very sweet of Rick, I tell you!! And I for one think that EVERY woman over 40 should have antler mittens at the ready!! How fun!! I just hope that you did them justice by whipping out those antlers at 'just' the right moment to cause guilty, uncontrolled giggles from two I-should-probably-be-embarrassed girls;)

Good go on the horse ridding!!! Willow is still begging fora horse, and I am still planning on the tactic that Lynne described above....

What wonderful antlers you have! Seriously, very beautiful. Also, would you and Rick adopt me so I could have horseback riding lessons, too?

You could knit them with the antlers on the backs, and do the matching-palm-thumb in the plainer design. Then if you hold your hands over your ears, the short part of the antler is toward the front, as I believe it should be. (This part also works if you just switch hands with the existing mittens.)

So glad to see the photos! But not feeling any sympathy on the cold. Prediction for the weekend here: High of 3F on Sunday, low of -15F.

(Sad how happy it makes us to be cold and brag about it here in MN!)

Ooooooh! Yeah for the riding lessons! And since it took a while for me to catch up on blogs, I'll add to Ellen's comment and say it will be a high of minus 1 on Monday.

I do so love the antlers. I am sure that they could be shifted/tweaked to allow room for comfortable thumbs.

Sorry for the chair duties and the wisdom teeth, but Mammoth and horseback sound delightful!

Gorgeous mittens! I'm glad you had a good vaca, even if reality did come crashing down when you returned.