I am, though (I must confess), knitting less than I usually do.  There are several reasons for this, all of which have to do with trying new things.  I have never been someone who believes that you can't teach an old dog new tricks - in fact, I think that learning new things, maintaining that childlike enthusiasm and wonder for the world, is one of humanity's most important traits, when humanity can hang on to it.  And really, doesn't it make life more interesting?

Of course, I really should do a better job of rationing my new things so that they don't happen all at once, across multiple areas of my life.  I've been trying some new behaviors on a personal level, ones which feel more coherent with the person I am, and while I won't go into details here, I think I'm not alone in finding that sort of thing extremely difficult, and in finding that it doesn't always go smoothly.

I've also been trying some new pedagogical techniques.  One of the hot new teaching tropes these days is "flipping the classroom" (go ahead, Google it, I'll still be here when you get back).  For better or worse, everyone's talking about it.  So I've been paying attention, and have attended a few Faculty Center seminars on it, and I think that there are some techniques from this movement that I can use in the classroom, especially in the area of developing group work which pushes students into interesting new areas.  On the other hand, I have to admit that my very first question when I heard about the concept of flipping a classroom (to take the "lecture/information acquisition" part of learning out of the classroom, so that students can do more interesting and higher-level analytical and applied work in the classroom, facilitated by the professor) was, "Isn't that what a seminar is supposed to do?"  You know, you have the students read something outside of class, gain a basic understanding of that something, and then come to class prepared to do something more analytic and challenging in class.

Except that begs the next question: what do you do when they don't do the bloody reading before class? (!!)  So I'm trying some new things, including creating short little introductions on YouTube to each of the course readings, to move that out of class and give us more time in class for the stuff I love the most - the hard analytical and applied work.  Of course, that requires me to create one of those little videos for each of the class readings.  Doh.

So that's work and emotional lives.  What else could I add?  Well, inspired by my sister-in-law, I have been working to increase both my distance and speed when I walk.  I managed nearly nine miles at under 13-min/mile on Sunday, so that's coming along.  But even better is this: 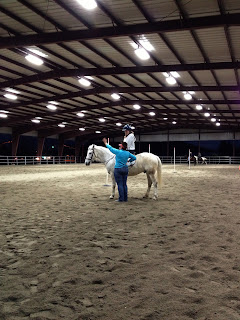 That's Older Daughter, finding her focal point.  I think I mentioned a few posts ago that the girls and I are taking horseback riding lessons every week, and we are loving it.  We've all three agreed that it's just about the best two hours of our week.  Last week, we spent the whole drive home giddily saying, "We trotted!  We trotted!"  (Until Younger Daughter pointed out that, actually, it was the horse that trotted; we posted.)(Pedant.)

So with all of that new, my knitting has not been of the challenging sort.  I finished and blocked the Shattered Sun Shawl.  I think it turned out fairly well (bad photo notwithstanding).  This was a nice knit.  The pattern was clear, not difficult, and the results are lovely.  I used Jade Sapphire Silk/Cashmere, and it took just a titch less than one skein (whew!). 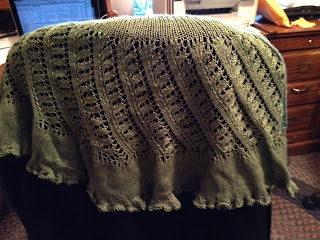 That isn't the best color representation - below is closer (it's a kelly sort of green): 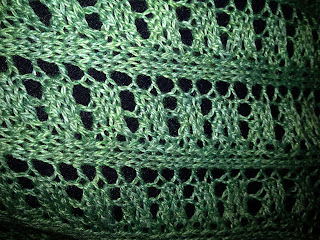 I also finally cast on for a sweater that I've been wanting to knit since seeing it in the Fall KnitWear.  It's Katya Frankel's Gathered Blouse. 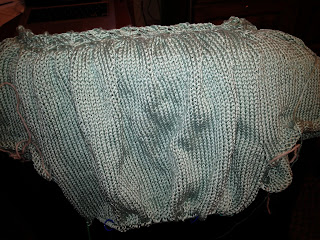 I am taking a bit of a chance and knitting it in cotton, rather than in the wool blend of the sample in the photo.  It is possible that the weight of the cotton will change the drape of the neck enough that I don't like it, but I also need more cotton sweaters, and I'm risking it.  I have split for the sleeves, and I think that what I need to do is to not knit it for a night, and to (dorkily) wear it around the house to see what happens when the weight of the cotton pulls down on the sweater.  We'll see.

I'm knitting it out of Cascade Ultra Pima, which I had in stash (I have been trying to be better about using stash yarns), in the 35 3/4 inch size.  There are a number of clever things that I like in this pattern, including the use of short rows to raise the back of the neck, and the pleats along the sleeves and front, but I am finding that some of the numbers aren't right in this size of the pattern.  When I am done, I will try to put those together on my Ravelry page for this project.  (Again the color isn't too close above...it's more of a seafoam green, which I very much like.) 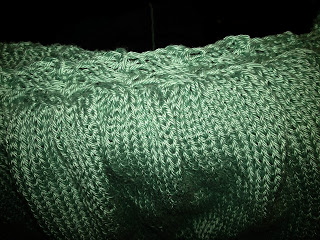 So, that's it.  A whole lot of new, and some old.  I'm also revisiting projects that are languishing OTN, with an eye to working my way through them one by one.  More on that next time.
Posted by Knitting Linguist at 5:25 PM

Doing new things always seems to take more time to do. I am sure it will get easier, and the knitting is still there to keep you going

I think old dogs need new tricks (speaking as an older dog)! Sounds like you're all really enjoying the horse-riding. Flipping classrooms -- I wonder how that would work in a beginners ESL class? As if we don't do enough practical work there already! But I did find students reluctant to engage in more critical activities such as expressing preferences, or giving opinions!

I guess I didn't realize all three of you were taking riding lessons! I ADORE riding, and with my back will never do it again. :( But I'm so glad you are learning! It's so much fun.
And yes, those personal things we have to learn to work with, around, and through. OY.
(((hugs)))

hhmm. food for thought. I have realized that I have also been trying new things, maybe too many new things at once as well. And of course, being the facilitator of the entire family I also have responsibility for some of those new things others are also trying....like eliminating meat for a month. I'm exhausted, mentally and physically, and what I realized just a week or two ago was that I had pretty much stopped knitting which was exacerbating the exhaustion. Back I am wiht the needles, and feeling better.

Isn't it funny how those 'little' things like changing a behavior probably take the least amount of time in our day, yet use the most energy?? I applaud you on many fronts....

I definitely go in cycles. A whole lot of new, a whole lot of the same. Back and forth. Keeps me interested, but gives me time to relax back into the familiar every once in a while, too.

I have mixed thoughts on flipped classrooms. Everyone on my campus is trying it too, but I'm not entirely convinced. Worth playing around with, though. Like any learning method, it's ultimately the implementation that's the real challenge. Have fun playing with it, anyway!

New things are fun ...but time consuming, I too am playing wth flipping the classroom, oddly it is my students who resist.
I owe you a very belated thank you ... One of my new things is to write more, rather tha flick off quick messages, which is grand, except when sitting down and writing keeps escaping me.

I haven't ridden in about 10 or more years now, but I love it. Just before I stopped (work and life got in the way, but I'll get back to it again) I was teaching beginners. I loved teaching children, because they catch on quickly and are so adaptable, but I think I really preferred adult learners more. Adults learning to ride, as long as they aren't scared of the horses, are so rewarding to teach! They work really hard and are able to understand the logic of what they need to do (even if the body doesn't cooperate). I once taught a man in his 40s how to ride so he could enjoy riding out to fox hunt with his wife. Now that is dedication!!

I wish you all the best with it and hope I can get back in the saddle again sometime soon!

Your riding lessons sound like they make you all positively giddy! We give to Leaps & Bounds, a therapeutic riding center. It's amazing.

Flipping the classroom? Does that mean the students actually have to respond/work? The lecture method would be perfectly dynamic (well, depending on the professor) if the students engaged.