I was about to say that I can't believe it's been over a month since I last posted, but that's not true.  I've been aware that I haven't been posting, and I've also been aware that it's an artifact of something that I know to be true about me, which is that I can only be disciplined in a certain number of areas at the same time - anything else just falls off the table.  This last month has involved a tremendous amount of discipline at work (yes, I'm looking at you, Fall schedule build), in my knitting (you'll see what I mean), and in the area of exercise.  The blog just fell right off the table, mostly because in those moments when I wasn't doing one of those things, I did not want to be on the computer - I wanted to be knitting, or reading, or talking to the girls and Rick (or all three at once).

First, knitting.  I finished the Gathered Blouse sweater (a long time ago, actually - I just haven't been able to get it together enough to be wearing it when it's a) light out, b) the beginning of the day, and c) a camera is nearby).  But it is done, and I am actually wearing it now, so in lieu of no photos, here are some bad photobooth photos (better than not posting, still, right?). 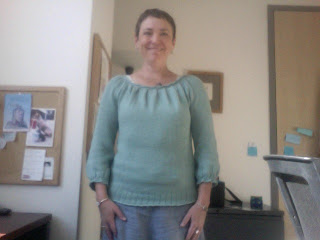 It is definitely a loose fit, and I think I could have gone down a size (and yes, I have washed it on hot and dried it - this is what I've got).  It's very comfortable, though, and the cotton is soft soft soft, which I love. 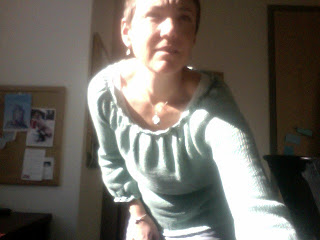 Not a great shot, but it lets you see the pleats around the neckline.  There were a lot of things I really loved about this pattern - it is very well thought out, and brings some nice details in, like the gathers at the neck and sleeve tops, and the short rows that raise the back neck a little.  And the braid across the small of the back. 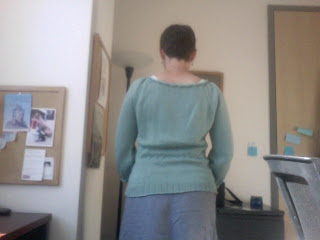 So, I do wish I knitted this in a smaller size, but not enough to pull it out.

I also finished the couch blanket (the Mitered Crosses Blanket) that I've been working on for ages and ages (I was rather embarrassed when I looked at the start date on my Rav page).  This is part of my goal to use stash yarn (the sweater was knitted from stash) and to finish projects more often than starting new projects with new yarn.

Knitting the blanket didn't require discipline, really - it's a fun knit, the squares are small and portable, and easy to do without looking at the pattern.  But putting it together (involving picking up stitches and then doing a three-needle bind-off) took a bit more self-discipline.  And weaving the ends in? 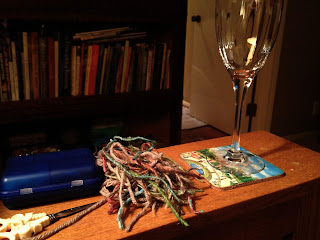 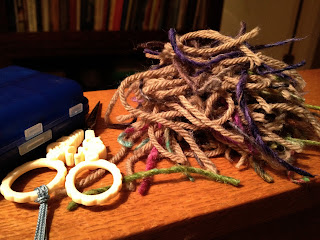 That took a glass of wine.  It was a big pile.


But the blanket has gotten a LOT of use - I haven't even blocked it yet, because one of us is always sitting with it. 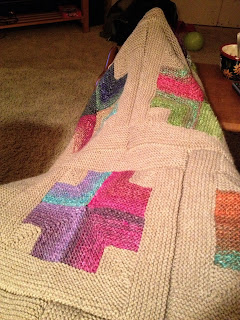 I did, finally, manage to get a picture of it laid out. 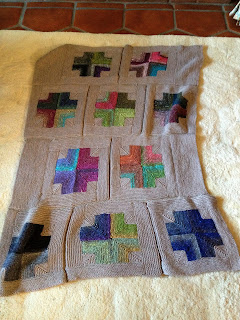 All in all, I am very happy with my first (non-baby) blanket.  It's a good size for covering most of oneself, if one is small.  And in fact, it served as a blanket on the nights I slept on the couch last week to keep my coughing from waking Rick up (I got felled by one of those horrible head colds that are going around - more on that in a moment).  If you don't mind finishing work, this is one I recommend.

The other area of self-discipline lately has to do with a challenge on the walking front that I took on, encouraged by my SIL (who has REALLY been challenging herself in this area lately) - a half-marathon.  I've been working up to longer and longer walks (aiming for my old racewalking speed from back in the day - and, someday I hope, faster), and I finally committed and signed up for the San Diego half-marathon, which took place this past Sunday.  Of course, last week, I ended up getting really sick for the first time in years - I was truly worried I'd have to pull out (it's hard to walk 13.1 miles when you can't breathe).  But thanks to a Z-pac and some sleep, plus the weeks of training I'd done before, I went.  (I just want to note that this was the day the time changed, and that I had to be ready for a 7:18 am start, which meant getting down there by about 6:30, which meant leaving the house at about 5:45, which meant getting up at what felt like really really early, since all of that was - let's be honest with ourselves - an hour earlier than that.) 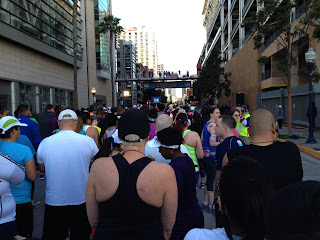 There's the start (from the back of the second-to-last wave).  And I walked that sucker, I truly did. 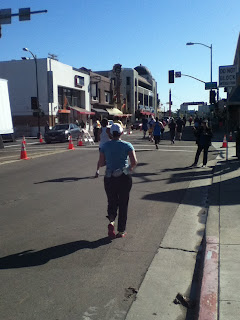 (One of only three photos taken of me by Older Daughter.)  And I finished.  As a walker, I'd been hoping to make a 3 hour total time.  By the time I got to the race, though, having been really sick all week, I was worried that I wouldn't make the 3 1/2 hour course closure time.  But I did.  In fact, I finished in 2:54:21.  I'm good with that.

But no pictures of the finish!  No pictures with my medal!  Rick and the girls came down to cheer me on at around mile 10 (after the big hill - that's where Older Daughter took that picture), and again at the finish.  My dear friend Vivienne came down to congratulate me, too.  We had enough time to drink some water, eat a bagel and get the girls something to eat, and then we had to race off to get Younger Daughter to the first of her St. Patrick's Day Irish dance performances (it's that time of year when her school goes to various senior centers, churches, and VFWs to perform for St. Patrick's Day).  To which I went, sweaty and footsore, but pretty proud.

And there it is.  That's what I've been doing.  I'm scaling back the long training walks for a little while, to get ready to walk a 5K with Older Daughter, and the first pass of the fall schedule is in, so with luck I'll have more time and energy on the weekends to post updates on what I'm doing (which includes knitting another sweater and, soon, taking a class on how to weave with my little Cricket loom), and to catch up on what everyone else has been doing in the knitting world.  I've missed it!
Posted by Knitting Linguist at 10:18 AM

Lots of wows. I can't handle the finishing on that blanket. This might shock a few friends, but there is not enough wine. I'm in awe. And a half marathon? I can't get past a 12k, but that's ok. Hope your cold is better.

Welcome back! I can really relate to the areas of discipline thing. It is just not possible for one person to be perfect (and present) for all things at all times. That's why I don't write patterns...I just can't force that much attention to detail in one more area of my life!

Love the sweater, and I think it looks great in that size. Not super-fitted, but it's a relaxed enough pattern that it doesn't look like it has to be. Blankets are my Waterloo, so I am very impressed by yours. I'm even more impressed by a 3 h half marathon with a cold, though. Congratulations!

The sweater looks great - and congrats on all that walking!

Jocelyn,
I've had that cold for two months now - not fun, but everyone has to take their turn with it :)
I did the Finish Chelsea's Run 5k with my 11yr old daughter Mar.2nd. You will love doing one with your daughter too. Congrats on your half marathon and your time.
Patrice

Congratulations on completing the half-marathon in a great time! I hope you are feeling much better now!

I am SOOOOOO proud of you!!! Congratulations on that 1/2 marathon. Whoohoo! And the Sweater, too, but most especially the blanket.
And I miss you.
(((hugs)))

Congrats to you on finishing the half marathon! I'm totally impressed (and a little envious).

Wow! With all that going on, it's easy to see how blogging about it had to take a back set.

And only one glass of wine to get through the blanket ends? Qualifies you for Finishing Hall of Fame in my book!