So, true story.  Friday night is pizza and movie night around here.  I was sitting on the couch, watching a movie with Rick and the girls, when I thought I dropped something.  I reached under the couch to see if I had, and came up with...an egg.  Which I found rather surprising, since we were in the den, and the chickens, so far as I know, do not come into the house to lay eggs.  I chalked it up to general weirdness and went on watching.  (Upon re-reading this prior to hitting publish, it occurs to me to wonder what that says about the general state of weirdness in our household.)

The next morning, Rick came into the living room, holding up another egg.  He'd found it at the foot of the bed, on the floor.

I should be clear here - I'm talking about raw eggs.  Not hard-boiled eggs, not Easter eggs, not chocolate eggs (alas).  Chicken eggs, of the sort our chickens lay.

Fifteen minutes after Rick had announced his discovery, I heard dog paws clickety-clacketying down the hall, and then heard a rather hollow-sounding plonk at my side.  I looked down to see (you guessed it): an egg.  And a very pleased-looking Mathilda.  Who apparently is under the mistaken impression that she is the Easter bunny.

We haven't had any more special deliveries since then (although, given the under-the-couch egg, I am wondering where and in what state I will find other such "gifts" that I haven't noticed yet).  Our best guess is that some of the chickens have stopped laying in the coop (for a while, some of them were very attached to a nest on the side of the house, but then they all figured it out) because one of the chickens has gone broody, and persists in sitting in the nesting box all day, if allowed, making cranky noises at anyone who comes to bother her.  I'm guessing that the other hens find it easier to just lay elsewhere, and Tilly wanted to make sure that we weren't missing anything.  Never a dull moment around here!

In fiber-related news, I finished my first "real" weaving project.  Realizing that I don't wear long rectangular scarves, generally, I knew that I'd need to think of something else to focus my weaving attention on.  So I decided to try napkins. 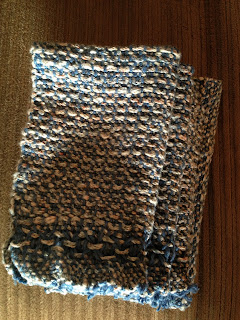 For a first-time experiment, they didn't turn out badly.  They are narrower than I'd hoped, as I warped the loom to an 90-inch warp (hoping to weave four 20-inch napkins that were 10 inches wide), using my new 10-dent heddle and a very nice linen warp (FibraNatura Flax).  Alas, the 250 meters that I had wasn't enough, so I ended up about an inch and a half shy of the width I'd wanted.

The weft yarn is Plymouth Grass (a 65% cotton/35% hemp yarn).  I tried a couple of new things on this project, for fun.  I hemstitched each end of the napkins as I came to them (a 2x2 hemstitch). 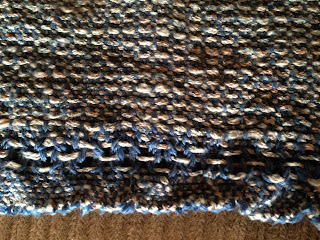 You can kind of see it there.  Now, I am not fond of fringes in my linens, so I trimmed two of the napkins off very close to the hemstitch (still need to do a bit more neatening up), and left two a bit longer, to see how they wear.  Any weavers out there want to tell me the best way to finish edges so that they look neat and have no fringe at all?

In the main part of each napkin, I started with leno (alternating 2x2)(you can see it more closely below), and then played around with weft floats using a pick-up stick for the rest of each napkin. 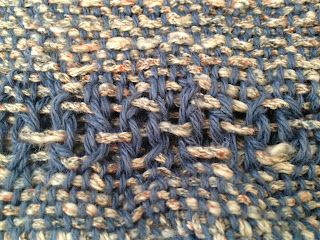 I finished them by washing and drying them.  They turned out, as I said, smaller than I'd wanted, but very absorbent and soft and cushy.  So I consider them to be a reasonable success for a first time out.

I immediately trucked off to my LYS to get more yarn for more napkins.  This time I ended up with a linen warp (Habu, L25/3 linen, 331 meters)(this is a finer-weight yarn than the FibraNatura, so we'll see how that works), and a blended warp (Plymouth Linen Concerto 48% rayon/42% linen/10% cotton; this is the yarn I used for the weft of the scarf that was my first project). 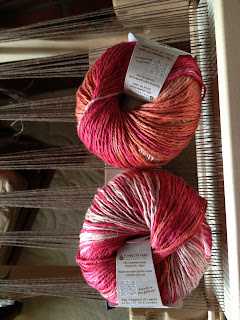 What you see there is the loom, dressed after two attempts.  The first time, thinking I'd have enough warp yarn for a longer warp, I went for it, only to find, about an inch and a half shy of my total 10-inch width, that I was out of warp yarn.  So I unwarped the loom, which, it turns out, was not as easy as I'd hoped.  I persevered, however, and rewarped it somewhat shorter, but all the way from one side to the other (hooray!).  I finished the warping and tying on this morning, so this is ready to go.

At the same time, I can't help but think of bigger projects, not to mention stash-busting projects (and more on me and my stash and our recent adventures in the next post).  I think that I want to weave the girls some blankets.  They will, of course, have to be woven in strips, but once I got the idea in my head, it wouldn't go away.  And then I remembered a skein of sock yarn that I got when I was in the Rockin' Sock Club a few years ago - a skein that is not at all my sort of colorway, but that Younger Daughter immediately laid claim to.  It's been waiting for the right time to get out of stash and into a project for her. 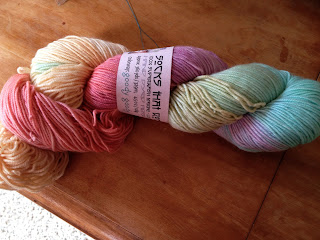 Talk about Easter egg colors!  Of course, that's not going to be enough for a blanket, but I also remembered four ounces of gorgeous Falkland fiber, hand-dyed by Erica, that I bought because the braid made me think of Younger Daughter (I now realize why). 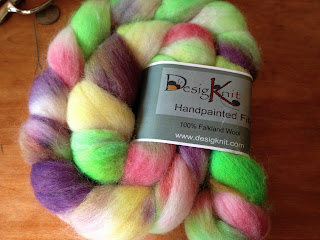 Well, surely something can be done with that combination?  I'm thinking of using handspun yarn from that braid as the weft in the middle parts of the blanket, and the sock yarn for the weft at the edges.  But that leaves the warp.  Well, how about that yarn I bought to take the kilt hose class at Sock Summit, but which I haven't used? 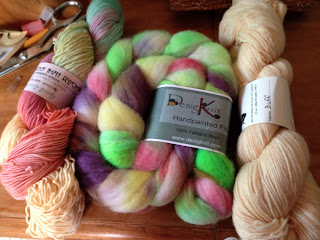 Yup.  I think we've got something there.  I spent some time today thinking about maths. 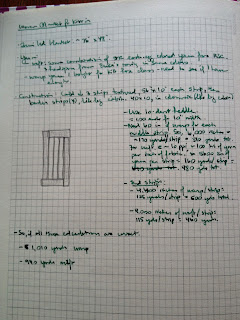 Which rather made my head hurt.  I think I'll have enough of the two weft yarns, but will probably order one more skein of that sock yarn for the warp.  I have time, as I need to spin the Falkland up.  You can see there my sketch of my plan.  This'll be a twin bed size, so about 76" by 48".  I'm thinking three strips of a textured weave in the middle, and then four strips, arranged log cabin style, around the edges, woven in a colorwork pattern.  I have time to work out which while I get through my current napkin project and the kitchen towel project (planned to be a colorwork one) after that.  Once those are done, I think I'll be ready to tackle something bigger.

Meanwhile, I am plugging away at the Northmavine Hoody.  Whilst watching Paris-Roubaix this morning, I finished the second sleeve and got it onto the needle with the body stitches and the first sleeve, and am now working on the raglan decreases.  Little by little.  I keep reminding myself that this is not a project for the faint-of-heart.  Not only does it have lots of finishing details still to come (knitting ribbed bands along the fronts and then picking up and knitting an i-cord bind off all the way around the fronts, hood, and bottom of the sweater, then installing a zipper and knitting pockets), but the number of ends to be woven in are astronomical (four ends per every eight rows; I am not kidding).  I have been taking time at regular intervals to weave ends in so that they're not all waiting for me.  In fact, I believe that the second sleeve and its ends are calling me even as I type. 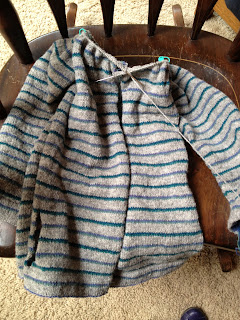 So there's the question.  Do I weave?  Get that spinning started?  Weave in ends?  Fold laundry?

Well.  I think we know the answer to that last one.
Posted by Knitting Linguist at 3:21 PM

Very funny about Tillie! Glad that your chickens are working out for you.

I love the big weaving plans. Sometimes planning is better than all the rest.

Tillie is a very careful dog, taking care of everybody. How does she get along with the chickens?

It seems like only yesterday that spinning became a big part of your fibre-life, now I see it's weaving! Funny how we all have our "cycles" where we prefer one activity over another, isn't it? For me, at the moment, it's reading (lightweight fiction) rather than crafting!

I love the combination you're putting together for Younger Daughter's blanket!

My mother wove a lot - including my wedding dress :) Anyway, for napkins (and I have a TON) she made perfect selvedges for two sides and made a very narrow hand hem on the other two sides. Love the ones you made!

Tilly is so funny! Hopefully you manage to find all the eggs in time...they probably look like a ball to her.

As to selvedges, I just fold mine over and hem them. I'm not sure I've seen a no-fringe version that doesn't involve sewing; I'll let you know if I come up with one!

I just happen to have a twin for that roving...shall I send it your way?

Love the look of the hoodie. Looks like it's going to be super comfortable!

1. I am commenting now instead of blogging, spinning, dyeing, weaving, knitting, laundry or feeding kids of the human or caprine variety.
2. When you mentioned Mathilda, my first thought was....OMG did they get another dog :) Never have I heard her formal name! Silly dog...actually, you might be able to use that to your advantage with a little training!!
3. My loom is still in the box.
4. The Ashford is getting a lot of use...
5. HOW do you do all you do???? Do you offer training??

I hope there are no more u found gifts for you to smell in the future! I have a blanket that my grandmother's sister in Ireland wove back in the early 1900's. it is about twin bed size and woven in strips. I'll have to dig it out of the cedar chest and take a picture.

Hmmm, I wonder where you'll be smelling those eggs in a few weeks :)

You are making me wish I had more of a drive to weave. My loom sits sadly ignored right now. But you are inspiring me!

Oh SO funny, dogs are the best.

The blanket will be amazing, go you!

Now there's a trick that Ruby has yet to learn. I bet she'd love to try if she could reach the nesting boxes!

But I don't like this waving about of weaving in front of my face. I do not need to see this. Especially when it is so interesting. Please stop immediately!