Thank you for all of the comments and feedback on my sweater conundrum.  My final conclusion was that the whole thing was trouble (very precise and technically-oriented, I know), so I ripped out both halves of the edging and started again.  Slowly.  I picked up for the outside facing, and then ran a lifeline through the stitches (which wasn't easy, as these are small stitches, knitted relatively tightly on small needles), so that I'd be able to find them again easily when I went back.  Then I knitted the front facing, put it evenly onto two needles (to keep from squishing all the stitches and making them unmanageable when I went back for the inside facing), and went back to pick up the purl bumps just above the legs of the original stitches (the legs being easy easier to spot now that they were on a lifeline).  That took eons, but it worked.  I should mention that there was also some very careful (and time-consuming) counting (and re-counting) of the 497 stitches on both sets of needles prior to the knitting of the inside facing.  Then I knitted them all together for the three needle bind-off.  That took the better part of all the knitting time I could devote to it last week (about 15 minutes to rip out everything I'd done, and then hours and hours - literally, though I wish I were exaggerating - to get it all done again).  I had that pretty much done by latelate Saturday night, when Older Daughter got home from this: 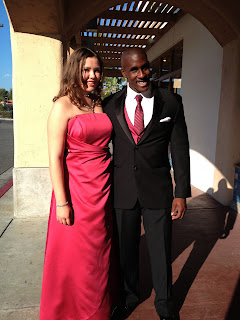 (Some of you may recognize the signs of prom.)  In fact, much of Saturday was spent on the getting-ready part of prom (getting nails done, for example).  There was even hair-doing.  I'm not much of a girl, really, and you've all seen how short my hair is these days, so that involved going out to actually purchase a hair-dryer and curling iron (!!).  I think Older Daughter was deeply concerned that the curling iron part of things might end up like this, but I finally let her know that I did, in fact, once upon a time own (and even use!) such a thing on myself, and it all turned out OK in the end.

Sunday morning (after coffee and croissants, my requested mother's day treat), Rick and I headed out (leaving prom-exhausted girls behind) to this: 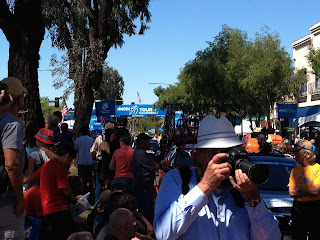 The start of the Amgen Tour of California.  In downtown Escondido.  Where it topped 100 degrees before the race even started at 11:15.  After a quick lunch at home, we went out to the last King of the Mountain points banner to watch the riders come up their last big hill (they'd already climbed Mt. Palomar in the heat, poor guys); it was still over 100 degrees, under 25% humidity, and they looked pretty beat.  We stood in the shade and cheered (we even showed up on the TV coverage, heh).  I love a good stage race - we'll see how this one turns out.

Then home we went, where I finally (finally!!) picked up stitches around the bottom of the sweater, completed an i-cord cast-off around all of those stitches plus the ones still on the needles around the front and hood (it felt amazingly like a walk in the park after the facing debacle), and then did the same thing for the sleeves.  And wove in the ends.  And then this morning, knowing that we were in for another scorcher, I soaked and blocked the sweater before leaving for work.  The sweater is now, of course, quite dry.  All that remains is to put in the zipper. 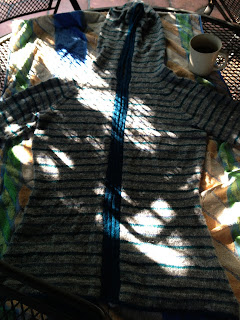 (Bad picture, but it was that or nothing.)

That, my friends, is a sweater.  Ends woven in, i-cord edging complete.  Ends woven in (have I mentioned how many ends there were in this sweater?).  And double-sided front/hood edging? 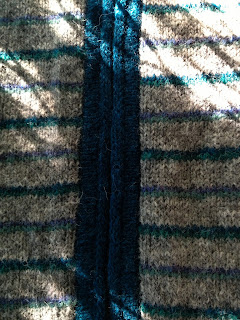 Love it. Know what you mean about just knowing that the whole thing is trouble. Sometimes a good reboot fixes everything.

I can't believe OD is old enough to be promming already! Crazy. She looks lovely, though, and her hair is very nicely done. =)

Well, I should have been paying attention to the knitting, but all I could do was gape at Older Daughter in her stunning prom dress. Do you ever get that "is this my little girl?" feeling?

Hurrah for a satisfactory conclusion. I wish you were exaggerating about the time taken too; but I know you're not!

Prom?!!! I have trouble believing, despite photographic evidence of two fine young people (young but not young) looking damn good in what must be prom get-up. Wow!

The sweater finishing has been an exercise in perseverance, that's for sure. But finished! The zipper will be nothing compared to all the ends, not even speaking of the crazy facings/edgings. I can't wait for a good look at it!

I recognized the signs of prom. What I did not recognize was Older Daughter. I know there were signs she was on the way, but oh, my, when did this woman move into your home?

I also recognize an absolutely excellent sweater. So fabulous. So worth the effort - in fact, the effort will make you love wearing it all the much more.

Well done! Not only for successfully helping OD with the curling iron but on raising such a beautiful, poised daughter (what a lovely prom couple - they both look so happy), and persevering with that great sweater.

And it came out this time, didn't it? Perfect!

Prom? What is this prom? It's been too long. Beautiful and handsome!

We had our Amgen tour around Mt Diablo last week. I watched clips on TV.

Older Daughter is NOT old enough to attend a prom--really what? Prom? She's gorgeous! and so grown up.
All I can say about the sweater is 'WOW'. Persistent you are. And that sweater better realize how much you love it and be wearable and lovable for a looong time.

I do so love the sweater...and how his vest and tie matched her dress. They are fantastic...all 3!!