This is a quick drive-by post, because I actually have two (!!) finished objects to show, and because after this bit of time, the rest of the weekend is going to be a bit busy (play this afternoon, followed by office party in San Diego; tomorrow, Younger Daughter has a feis in Burbank, which is a schlep away).
First, the finished projects.  I got the rest of the Jade Sapphire Sylph cowl finished, ends woven in, and blocked.  The longest part of the finishing was actually the one thing the pattern didn't call for - grafting the two ends together.  But I just couldn't see seaming it, so I altered the pattern a little by using a provisional cast-on, then grafting to finish.  I blocked it, and it turned into a lovely little piece that I think I'll use a lot once it cools off (again - more on that). 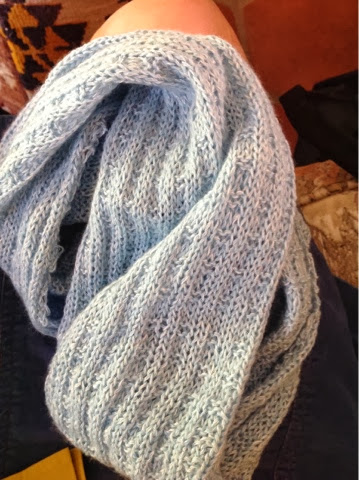 This is an interesting yarn, being a linen cashmere blend.  It is fairly loosely spun, with the linen forming a strong strand around the fluffier cashmere.  The linen also picks up the dye differently (almost not at all), which makes for a subtle tonality in the yarn.  All in all, I quite liked it, and would knit with it again (of course, the price point makes it a special treat kind of yarn, rather than a regular go-to yarn, as is true of all the Jade Sapphire yarns I've seen).
The weather was, for a while, on a cooling trend, cool enough that I could see Tilly's breath on our morning walk last week; cool enough that the hills are heading towards sepias and reds (that's 7:30 am at one of my two happy trails). 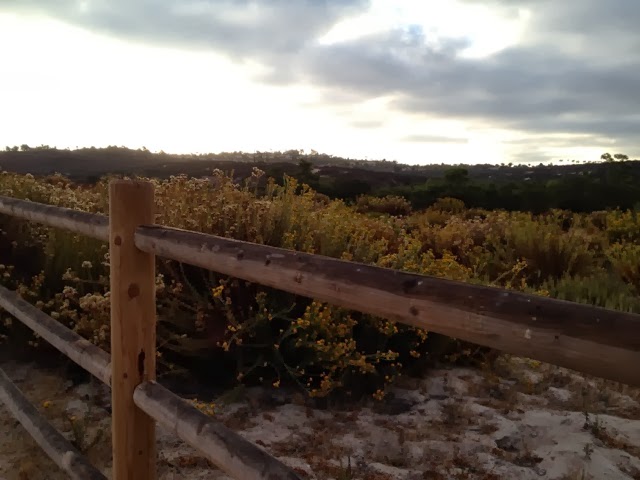 And cool enough that, with the sun setting earlier, it's starting to be downright chilly by the end of our Thursday evening riding lessons.  So I decided that our fabulous trainer, Heather, needs mitts to keep her hands warm (we, after all, have the horse).  I had a sneaking suspicion that I had begun a pair of mitts some time ago, and then stopped, not knowing quite whom they were for.  Knowing now, I dug them out.  I was right - one all the way done except for the thumb, hooray!  So I cast on for mitt #2 Thursday night and banged away at it.  Last night, I looked at mitt #2, and compared it to mitt #1, and realized that I must have used smaller needles than the pattern called for on the first mitt, because they were not the same size at all.  Upon careful consideration, I liked the second one better, so I ended up knitting a third to match.  There is now a finished pair (and a little ball of frogged yarn), and I am reminded of why it is so useful to take notes, when one changes something about a pattern (doh). 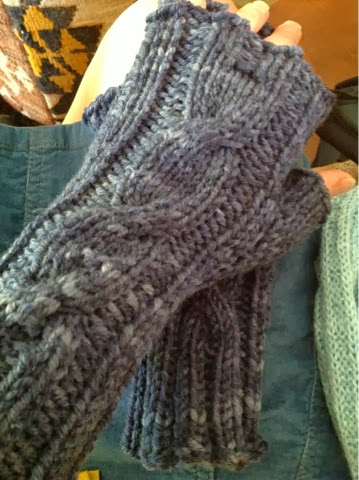 These are the One Cable Mitts, knitted out of Classic Elite Waterlily (a truly fabulous yarn that I have heard has been discontinued - if that's true, it's tragic).  I used size nine needles (for the record), and followed the pattern as written.  So these will go to their new owner on Thursday.
Of course, now that there are new warm things to wear, a Santa Ana has blown through.  Humidity is in single digits, and it is warm warm warm.  (Except when the sun goes down and it gets cold, since there's no moisture in the air to hold the heat.) (Please think flame retardant thoughts for us - this is fire weather here.) 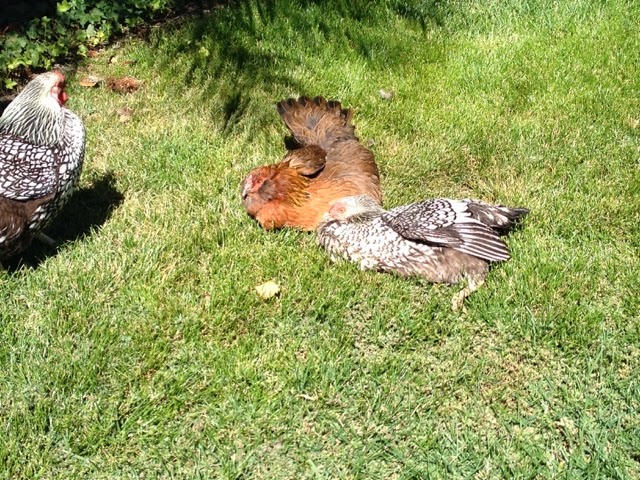 The chickens think it's a little hot, too.
Posted by Knitting Linguist at 1:25 PM

Both the cowl and mitts are lovely!
Our temps are starting to drop, and this weekend has been very wet!

Nice, and so happy you are still riding. I rode yesterday and got soaked, but it was warm enough that it didnt matter too much.

Hopefully the warm weather (and chance of fire!) will wear off quickly, and you'll be able to wear your woollies again. The cowl looks just like a piece of the cloudy sky in your second photo.

Yes, hot hot hot where we are too--in the low 90s today. BUT. Rain is forecast for Wednesday. Why can October not make up its mind?

Cute mitts. And Willow makes note to self: make notes.

I'm knitting a third (possibly fourth - I lost track) mitt myself. But it's fun because I'm knitting straight from the previous mitt. Cannibal knitting!

Someday, the kid will have his soft light luxurious blue mitts.

Ah, the need to take notes. How do we always forget it? The mitts and cowl are scrumptious.