A few projects on and off the needles

One nice thing about a long holiday break (which has been over for a while now, but still), coupled with no longer being chair of my department (the email load dropped off almost instantaneously with me handing the chairship over in the fall - I can't tell you what a relief that was), is that I finally had time to get excited about knitting again.

It's not that I haven't been knitting all along - last fall, in fact, I knitted a sweater for each my girls, and then one for my niece for Christmas.  It's more that I wasn't engaged in the joy and fun of thinking about new projects, weighing the options, looking at yarn; and I definitely wasn't anywhere close to thinking about playing around with designing anything.  One thing I know about myself is that I absolutely loathe last-minute pressure; I hate being late.  So, as chair, I realized pretty quickly that the only way to be ready for the inevitable late-notice, oh-my-gosh-oops-we-forgot-to-tell-you-this-is-due-tomorrow stuff, was to be veryvery on top of everything else, so that I'd have room for the last-minute things when they arrived on my plate.  I got into the habit of keeping an ongoing list of big-ticket items (the kinds of things that I know I need some serious time to get through: curriculum, meeting agendas, personnel reviews, etc etc), and the smaller things that I could knock off in five minutes here, ten minutes there (email, email, email).  Which meant that any time I had five or ten minutes, I was trying to get through those things so that I'd have longer chunks of time for the bigger stuff, and at the end of a day of getting through all of that, I really just wanted to read something mindless or knit something mindless or go to bed.  The nice thing about that strategy is that I did get enough sleep every night (no last-minute all-nighters to get something done), and I did get to walk my dog on a trail almost every day, and I had dinner with my family, and I spent time with my horse.  So, it wasn't the worst survival strategy in the world.

But what I almost never had was several unscheduled hours with nothing planned, and no to-do list that I felt strongly about getting to (to avoid emergencies later down the road).  And another thing that I seem to be learning about myself is that I need that kind of time - that kind of I could almost be bored here so what could I do that's interesting kind of time - to feel that there's enough space to poke at a new and exciting project, or a new craft, or a new instrument.  I'll also admit that things like Facebook, the New York Times crossword puzzle, solitaire, and Instagram all make it really easy to fritter away the smaller chunks of time that could become bigger pieces for sinking (in the sense of slipping into a lovely warm bath) into the creative.  As I write this, it occurs to me that I need to use time the way I did as chair - except, instead of getting the little work done in small chunks of time so I could create big chunks of time for the hard projects, I need to stop spending my small chunks of free time on little relaxingish things, so that I can create for myself the space, and spaciousness, to settle into a creating place.  Something to mull over.

The fall didn't really give me room for that - the chair transition and a few other things got in the way. But knowing that I had a sabbatical this spring, once I finished teaching an online intersession class (my first fully online class, and one of the "other things" whose preparation was on my mind during the fall), I was able to take a few weeks to not-work, and to start to get my legs back under me.

I knitted cowls for me and the girls: 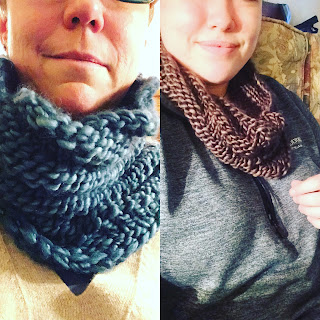 That's me and Older Daughter; Younger Daughter has one, too.  These are all knitted out of Baah Sequoia, a super-chunky and super-soft and lofty yarn dyed by a friend and local dyer.  I have discovered recently the pleasure of cowls, in that they never fall off, and you don't have to deal with ends flying about or not staying put.  Of course, there is also great pleasure in a lovely neck-warming small shawl, so I knitted one of those, too (and used it, in progress, as a header shot for an article that was just published on knitting and food in socialization). 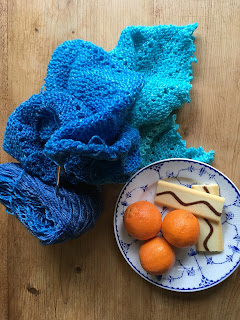 The yarn for this is a lovely little skein I picked up from the Yarnover Truck during the Vista Fiber Festival. 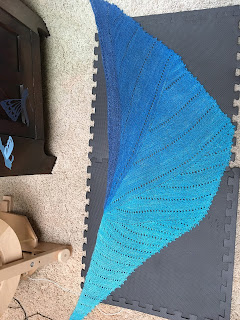 I don't have any pictures of me wearing it yet; I'll have to get some.  I'm surprised I've managed to hang on to this one - a lot of people have threatened to steal it.  The yarn is Apple Tree Knits Plush Gradient, and the pattern is Imagine When. 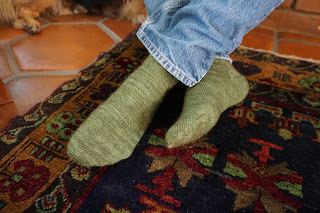 One funny thing about these is the heel, which I knitted in my usual eye-of-partridge stitch.  (I knit these from the toe up, with a heel flap on the bottom of the foot.)  On one sock, the eye-of-partridge turned out beautifully visible.  On the other, not.  I can't figure out what the difference is between the two - same needles, same stitch, same everything, different outcome.  It's weird.

And for my birthday, I treated myself to a sweater that I've been admiring: Evelyn.  This was a fun and easy knit, and the yarn is soft and plush; I'm a bit worried that it's looking a titch fuzzy already, so we'll see whether this turns out to be something I can wear constantly (which I'd hoped - it's good-looking AND cuddly, which is a winning combination, in my book), or whether I need to be more careful of it. 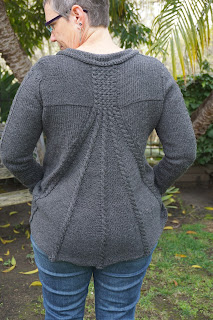 This was a fun knit, for the most part.  The cable up there at the top of the back felt a bit fussy (mostly because that much cabling in that small of a space tends to lead to tight stitches when I knit), but boy does it look nice: 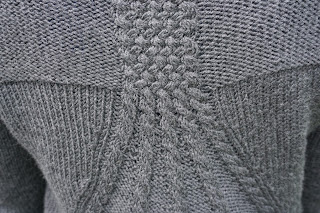 The sleeves are more of the same, but narrower... 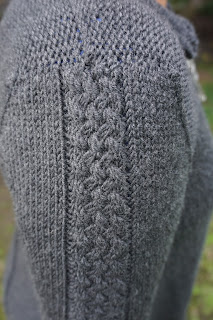 As is the button band.  (A snap will eventually go in there at the top.) 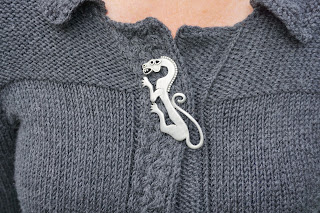 The only part of this whole sweater that kind of annoys me is the collar, which would not lie flat for love or money. 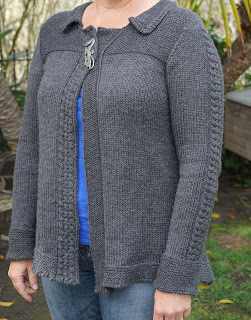 I have since tacked it down.  (That'll teach it to be contrary.)

There are a few other small things I could post, but I think I'll save them for another day.  I'm wrapping one of them up today (I hope), and, if all goes well, the yarn for my next sweater will arrive in the mail.  (Arrive, yarn, dang it!)  If not, Younger Daughter has mentioned that she'd like another hat, so perhaps that'll go OTN instead.

And that's all the knitting news that's fit to report.  What are you all working on?
Posted by Jocelyn at 2:41 PM

That cardigan is lovely. And the pin you are using to close it is as well. I hear you on the busyness. Working on the book was great, mostly fun, but you know, work. It has taken me a while to have some creative energy back. This winter has been terrible for riding. We have no outdoor arena and the footing has been so icy. Freeze and thaw snow and rain. What climate change? I have boots with studs to put on Zannah, but you still have to be careful. She has so much pent up energy. We had a little reminder lesson on the trail about listening yesterday...

Hi! It's been so long! Glad to see you are still knitting. That cardigan is awesome and that pin too. It looks great on you.

Nice projects - and I love your sweater pin!

Wilson and I have been trying to apply our hard-earned business skills to home life, and one of those is scheduling the important stuff. The hardest part is giving myself permission to say that the creative time is likely the most important stuff. So I'm trying to flip the past habits of time-boxing the creative fun so that the mundane but urgent can be done, and instead setting a limit to how much of my day goes into everyday to-do's and making sure the creative has the space to sprawl.

this is a work in project - I've only made small gains, but they seem to be auto-catalytic in that the more gains I make, the more excited I am to prioritize the creative. More to come on this...

I have been thinking exactly this today. Last day of spring break, spent the entire break working on getting the big pieces done so that it's mostly cleanup from here on out. Today I broke down and just needed to stop, but I couldn't muster up anything to do! I wanted to do stuff, had time to do it, and just didn't have the oomph to make it go. I definitely need that long-term, background planning to get excited about a project, especially if it's something that will take time to get done. I'm glad to hear that you're finding more space for that lately; hope it continues to improve!