(tap tap) Is this thing still on?

It has been much longer than I intended, since I last posted.  Far too long, in fact.  So long, that I wonder if there's anyone still out there in the world of knitting blogs?  (hi!)

I have missed writing.  I have missed hearing from others who are out there, making things and writing as well.

In fact, as I look back, I have come to realize just how limited my time and energy for creativity has been the last few years.  I was just sorting through my photos and putting them all into dated albums (something I usually do month by month, but I was a year or so behind), and for about four or five months last year, there were no photos at all.  Seriously?  No photos?  It's not like it's hard to haul out an iphone and take a picture, right?  Looking at Ravelry, there is a similar gap - until recently, my last posted project was from spring 2014.  ??  (I should say, it's not so much because I wasn't knitting, at least a little, in there - but I wasn't keeping track, and it hasn't - mostly - been anything too exciting.)

Basically, I fell off a bit of a creativity cliff in there.

It's not like life wasn't continuing.  I finished a four-year term as the chair of my department this past fall (2012-2016); I'm pretty sure that that's where the vast majority of my creativity went - into holding meetings and writing memos and staying on top of email and and and...  (My knitting time also went that way - when you're running a meeting, it's much harder to knit, I find!)  I learned a lot during those four years (I'm sure at some point I'll write about some of those lessons), but I'm glad it's over; I also lost a lot of things during that time (and I'm sure I'll write about that, too).

Older Daughter went off to college on the East Coast. (She's actually in her sophomore year, which says something about how long it's been.)  She loves it (although she says her intention is to return to California after)(pleasepleaseplease). She even gets to ride for her school team. 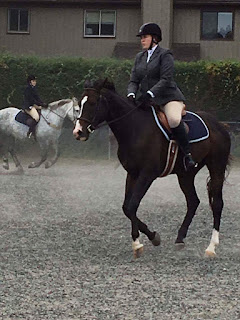 Younger Daughter is a sophomore in high school. 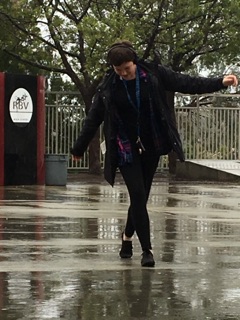 And, we added someone new to our family two years ago (say hi, Disco!): 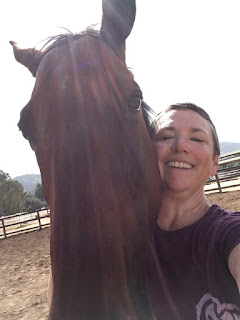 I'm going to keep this first post brief - there will be more to come.  I've been thinking a lot about what I want to be writing right now.  I value and appreciate the chance to share and think about and challenge myself in my knitting - and for the feedback and friendships that have developed here around craft.  I also, though, have been engaged with and thinking much about the current political situation, and about some of the issues that have been called into the forefront of many people's thinking because of that political situation - some of them issues that I've thought about and discussed for a long time in my classrooms (I do teach gender and language, after all), and others that I am learning about as we go.  I'm guessing that some of that is going to appear here, too.  And, finally, I've been dealing with some changes (mental, emotional, and physical) that come with midlife - that's got me thinking as well!  I'll try to give a head's up when a post is going to veer more towards the political/personal, so that anyone who might be reading can give those a miss, if wanted.

Meanwhile, give a shout-out if you're still here!  If you're new, say hi, too.  And if you have a blog or website, or something to recommend, please share.  I'm starting to branch out from knitting and yarn crafts to other things (cooking!  maybe even politics!), so please feel free to share those, too.

I'll be back soon.
Posted by Knitting Linguist at 8:50 AM

Welcome back! I look forward to reading about your adventures!

Glad to hear you're still there & still knitting! One of the last posts of yours that I remember was that one of the SoCal fires was getting close, & I feared the worst. Nice to have you back!

Glad to have you back. Look forward to your posts.

Welcome back! I hadn't realized how much I had missed your posting until you started again. From a fellow knitter/academic/horse person (although that last has been on hold for a few years as the academic part has been a bit too busy) it is wonderful to read your thoughtful posts.

So glad you're back! Looking forward to all your musings.

Happy to see you! My posts have been spotty, too. Maybe you will inspire me. Love Disco!

Happy to see you! I haven't been posting either, but I can't figure out how to change that, yet. Even blog reading is kind of spotty these days. I try to hit the high points, though! :)

I'm still here, too! You posted on my blog recently and I was thrilled to see "knitting linguist"!

Nice to see you again! I've fallen off the face of the blogosphere again, too...a coursework master's will do that, apparently. It is no longer unusual for me to go weeks or even months without knitting a stitch; I don't know what's become of me! Just a few more months, and then (hopefully) I'll be back again, too. Glad that life is going on, as it does, and looking forward to seeing you back here, in whatever form it happens to take. =)

It's so wonderful that you're posting again. I hope that you do share bits of your personal journey, thoughts and even musings on the political happenings. We desperately need to listen to each other, to build each other up, and to encourage one another even if we may not agree. Learning from each other helps to make us stronger yet more encompassing.

So thrilled that your eldest is able to ride on her college team, and that you've continued to ride!

WOOT!!!!! So glad you are back. I swear, I clicked on the link to your blog which is permanently on my toolbar on Feb 7!