A funny thing happened on the way to the barn...

So, I recently pulled into the ranch where Disco boards and drove (slowly! speed limit 5 mph!) over to the bathrooms to change.  As I did, I noticed a man walking in the same direction from the covered arena - I pegged him as a dad waiting for his daughter to finish her lesson, and smiled.  I tend to feel friendly towards people at the barn, assuming that, whatever else may be true, we share some interest in horses one way or another.  He seemed very occupied with examining my car (which I should also note, in the interests of full disclosure, is an old and very dirty Prius - I do a lot of driving, some of it on dirt, and it shows).  I headed into the bathroom to change, and when I came out, he was past my car and turning to look at it, again, over his shoulder.

I got in, started up, and was pulling out when I saw he'd circled back.  I unrolled my window.  Looking back, I was still in the mode of assuming that our common element was horses, and I think my expectation was that he was going to ask whether I had a horse at the barn, or whether I worked with one of the trainers, or something along those lines.

He said, "I couldn't help but notice your bumper stickers."

At which point, I wondered whether we were on the same page, in a social justicey kind of way.  Once in a while, people will comment on liking one of the bumper stickers.

"I voted for Trump, and I have to tell you, I am very happy right now."  (This was a few days after the first immigration ban.)

I made another semi-interested, noncommittal noise.  Mostly because I was taking it in, and trying to figure out exactly what was going on.  In the moment, my sincere feeling was that he'd never actually met anyone who thought the things I had on my bumper stickers, and he was checking out the liberal in the wild.  Friends later suggested that he was trying to pick a fight.  Maybe I was picking up on that, too.  But my strongest feeling was this: he was not seeing me as a person.  I don't know what he was seeing, but it really wasn't me.  He said,
"We really do not see eye to eye!"

And I, not knowing what else to do with that uncomfortable feeling that he wasn't seeing me, and I really would feel much better if he did, stuck my hand out the car window and said,
"Hi.  My name is Jocelyn.  It's really nice to meet you!"

He stopped short.  His hand was halfway out before, I think, he realized what he was doing (those social norms are strong, aren't they?), and he responded by introducing himself.  I told him it was nice to meet him, and he said again: "Well, we really don't see eye to eye."  I said, "That's one of the nice things about a democracy!", and he excused himself and wandered off.

It was weird.  It was weird because I still don't really quite know what he was hoping for in that conversation.  I do think that, whatever it was, he didn't get it.  I think I went seriously off-script.  I'm just curious what the script was supposed to be.

In a larger way, I also found it interesting that he approached me to tell me that he disagreed with me.  It's not something I would do.  I noticed the same thing yesterday, as I was standing outside my Representative's office with signs - some people would make a point of flipping us off or giving us a thumb's down.  It caught my attention because I regularly drive past a protest outside a health clinic - I don't agree at all with what the protesters stand for, but it wouldn't occur to me to flip them off; it doesn't seem like a conversation starter, you know?  On the other hand, maybe I'm just assuming that such a dialogue can't happen and avoiding engagement?  In other words, should it seem hopeful to me that someone would approach me about my bumper stickers - incipient conversation - or was it the verbal equivalent of the flip-off - no conversation, just an opportunity to say I don't agree with you?  Conversations seem so important, and yet so impossible, right now; I'm not sure what to do about that.  (Although a friend just sent me a link to a roundup of interesting articles about conversations and how to have them: here it is.)  What do you think?  How do you handle seeing visible signs of some stranger's non-alignment with your views in the world?

Meanwhile, the wisteria are blooming, and the leaves on the sycamores are coming out, and the branches on the oaks trees on my morning walk are tipped with new red leaves, almost like flowers.  I think it's spring. 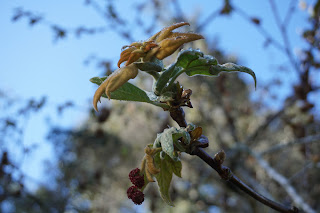 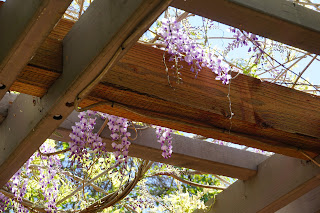 Yes, it sure is allergy season, er, spring. It's lovely seeing green hills and wildflowers as one drives down the freeway.

It's a shame that our species as a whole can't figure out that having many perspectives is a good thing and harness that into improving our world. But, as a total generalization, everyone is just shouting that his perspective is right and everyone else is wrong and covering their ears to anything else.

I think he was looking for a fight (why... who knows... some people just can't stand that people think differently), and I think you disarmed him beautifully.

It's not exactly the same, but when I trained for the Returns desk at Home Depot, their biggest tip was. "Be Friendly! Be happy!" because when people come in with a return, they are expecting a hassle. When you're friendly and helpful, it completely disarms them.

That sounds like a perfect response. I'm savign that conversation resources page. I have had a few conversations recently with people who voted for Trump. I know them already, professionally, and with one of them was shocked to the core. I asked questions about why, and listened to the answers. Then switched topics and asked to see current kid/grandchild pictures. You know, the future? It was interesting. I have some theories on why we never see/talk with/work with people who are really different than we are. Perhaps I;ll try to write that little opinion piece up.

It's too bad he didn't attempt to honestly engage you in a conversation, which apparently wasn't his intent. GIven that he appeared to be intrigued (obsessed?) with your bumper stickers he was definitely ruminating on something in his mind. I suspect that your pleasant politeness wasn't the opening he was edging for. On the other hand, he may have been genuinely wanting to talk but didn't know even the questions to ask since he could only think of his opinions on politics.

Let us know if you ever encounter him at the barn again and are able to actually converse on a meaningful level.

I just noticed the wisteria blooming at the house on the corner of my street. Spring truly is here!

I hope you can continue to engage in a pleasant way with that guy if you meet him again.