Knitting along - plus forwarding a language survey

(The language survey is at the bottom, so if you're here for that instead of knitting, feel free to hop on down there!)

So, a post just about knitting, I think.  I am feeling the excitement of spring, which seems to lead me to want to find new projects and cast them on, even though I'm also trying very hard to finish the big sweater I have OTN.  So, without further ado...

As I mentioned in my last post, I bought yarn (cashmere!  how could I not?!) to make a cowl while I was in Massachusetts (because I was taken, through no fault of of my own, to WEBS, and, well, cashmere!).  I cast on right away, and had it finished in about a day. 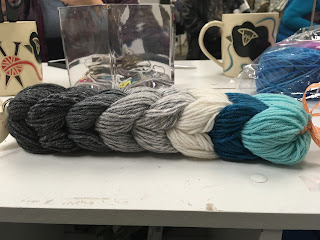 That's how it started out.  The pattern, which was printed on the label attached to one end by a little ribbon, called for two stripes of each color, but I decided to do just one thicker stripe of each, and to change the color sequence a little bit.  I was delighted with the way it turned out, and wore it for the rest of my trip.  It's not a huge cowl, but because it's doubled (and cashmere!), it's tremendously warm. 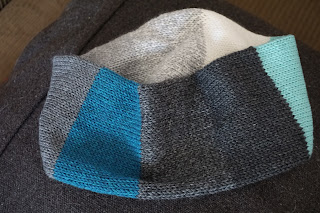 The yarn is Lux Adorna DK weight cashmere (!).  I truly love the hand on this yarn - it's simultaneously crisp and buttery.  It was a pleasure to knit with, and the colors are rich; it goes with a lot of my winter clothes, and I'll get years of use out of this one, I think.  Of course, it's warmed up too much here for it right now, so it will be put away until winter.

I've also finished the mitts that I knitted as the first pattern in the Year of Techniques.  The helical stripe trick is a ton of fun, and I can see other ways to use it in the future.  Which was, of course, the whole point of doing the Year of Techniques (more on that in a moment).  I finished the mitts over the weekend, and Kivrin promptly snagged them and bore them away.  I managed to get her to let me take one photo before they disappeared again. 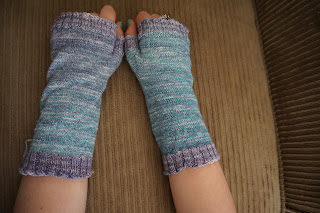 They would have been done much sooner, but I've been plugging away at Oa. 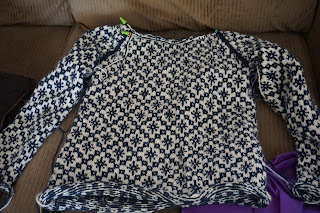 As you can see, I've got the sleeves finished and joined, and am working my way through the raglan decreases.  Gwilim is utterly convinced that I've knitted this as his personal cat bed. 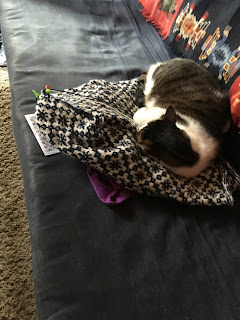 Once I've finished the raglan decreases, I'm going to have to make a decision.  The original pattern is a hoodie.  But I'm not sure that I want a hood.  This is going to be a VERY warm sweater as it is, given the stranded colorwork.  I almost never actually pull a hood up, so I'm not sure I want it there on my back whenever I wear this.  I very much like the look of the neck, though, going into the hood - it looks almost cowllike.  So I need to figure out whether I can get that look by foregoing the steek and hood, and simply knitting the neckband once I've finished decreasing for the shoulders (input from all and sundry is very welcome on this question).  Soon, I'll know whether that is a good idea, or a catastrophe.  Stay tuned!


In the meantime, I got my email with the next pattern for the Year of Techniques, but at the same time, that dratted Ann posted about a sweater she's knitting, and I took one look at the stripes and just felt like I needed a happy stripey springy sweater of my own.  Then I looked at the yarn at the bottom of the page, got an eyeful of one of the colorways, and started lusting after a stripey sweater of my own. 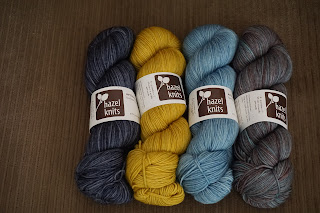 But honestly - blues?  with a fun yellow for contrast?  I had to have it, right?  (So much for knitting each of the Year of Technique patterns as they come out - intarsia, I'll get to you later, baby!)

Of course, me being me, I decided that I really don't want a Carpino (which is the pattern Ann is using); something about the mesh front kind of bugs me.  So that led to hours (and hours) of time on Rav trying to find the perfect pattern for a striped sweater.  I finally decided on Poolside, which has the top-down raglan look I wanted, and some lace, but not lace on the whole front.  Unfortunately, since the yarn I have is fingering, and the pattern is written for sport weight yarn, I'll have to do some math and jiggering once I've knitted a swatch, but I'm thinking that once that's done, I'm home free.  I'm planning to plagiarize Ann's stripes, which I like quite a lot.  I'm hoping that this will be some relatively simple knitting to do while reading or going to meetings, as Oa really requires me to look at my hands quite a lot (I can knit with one strand of yarn in each hand, but I have to check in with myself not infrequently).

So, that's all that's on my needles (in any kind of active way, at least)!  How about you?

And, as promised up top, here is a language survey that is being conducted by some colleagues of mine - if you're interested in language and language use (you do not have to be multilingual), please give it a shot and feel free to pass it on!

"We are two researchers from California State University San Marcos, Nicoleta Bateman and Golnaz Nanbakhsh. We are conducting an anonymous survey to learn about how speakers in the US use languages other than English (be they heritage/home languages, or second languages) in different social contexts. The survey will take between approximately 2 and 7 minutes, depending on your answers/situation. Thank you so much for participating!"
(ETA: this is the correct link; the first one was missing a "t" at the end)
https://csusm.co1.qualtrics.com/jfe/form/SV_3sn7oeANVWx8iot

Oa is looking great! And, no, you really couldn't be expected to pass up on those colors. They're wonderful! (Avoiding looking at them again myself...no yarn until there is knitting time again...soon!)

Could you do a shawl collar instead of the hood? I particularly like the shape of this one, though I'm not sure how the asymmetry would pan out on such a geometric sweater: http://www.ravelry.com/patterns/library/shawl-collar-with-a-basket-pattern

If you keep the opening fairly small so that it stands up high, it seems like that might give you the cowl-like effect of the hood. The right cowl neck might also do it...
http://www.ravelry.com/patterns/library/lush-cowl-neck-sweater

Lots of options! Have fun deciding. =)

Also, my browser says that it cannot find the survey. =/

Looks like you're got some great things on the go. OA is looking great.. but I think cat wins!

I like Poolside alot and your colors are pretty; you need that yellow for the 'pop'!
Your cowl is scrumptious - YFY still has those cashmere kits. I get why Kivrin hopped away with your gloves, savvy girl. Now, I need to figure out how to purloin you Oa. Hmm, perhaps your kitty will become my adversary.

(I have plans to knit Oa one of these days) I think that because Oa is such a warm sweater, the hood won't make it less wearable because warmer. In other words, it won't be used for a light layer anyway. But if you find hoods uncomfortable and annoying, then skip it. I've seen several knit with varying necklines (oh how I love Ravelry and its collection of projects) and they look good too.

I agree that I like the look of the hood, but would never use it. Even in Minnesota! Love the colors you chose for the stripes. Off to take the survey.

Ooo, I love Poolside! Not that I needed another sweater on my to-knit list or anything...

I would recommend putting in a lifeline or temporary bind of and trying on The Oa before deciding how to modify the neckline. Then you can look at where to add some increases for the neckline you want while being sure that it will also fit properly with the modification of removing the hood.