My yearly conference of choice is the American Anthropological Association's Annual Meetings, which always come either the weekend before or after Thanksgiving - this year it was the weekend after.  It moves from place to place, alternating between East coast, the center somewhere (last year it was Minneapolis, and I got to see Ellen!), and the West coast.  Since it was DC, Tess flew in to meet me, and I got to have dinner with my brother, who lives there.  We don't see one another often, so it was lovely to get to visit, if only for a brief while.

I'd hoped that Tess and I would get to do some touristy things.  I wanted to see the Smithsonian's Museum of African American History, but wasn't able to get tickets in advance, and I didn't find out until too late that they open up same-day tickets in the afternoon; I would also have liked to go to the Museum of the American Indian, which I adore, but this conference is pretty insane, and I just couldn't manage to get away.  To give you an idea of how insane, there were 6500 attendees this time around, and there are usually somewhere around 40 concurrent panels at any given time.  Very few of which I got to attend this year, because I was elected to the Linguistic Seat on the executive board, and much of my time was spent in - you guessed it - meetings (which is how I made so much progress on that sock I posted about last time).

Tess and I did manage to get away for a few delicious meals (Ethiopian food, mmm....).  And some shopping (new shoes!).  And some tea. 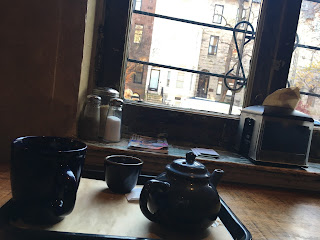 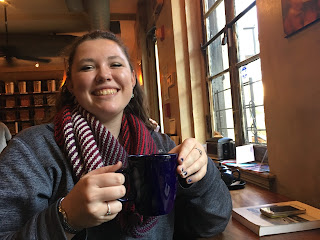 You can see that knitwear was involved in the weekend - that's the cowl I knitted for Tess, getting good use (I thought about saving it for Christmas, but gave it to her when I saw her at Thanksgiving instead - I am very bad at holiday knitting in general, because I tend to hand out my FOs as soon as they're off the needles; Rick already has his Christmas socks, too).

We did manage a quick visit to the Hirschhorn Sculpture Garden at sunset. 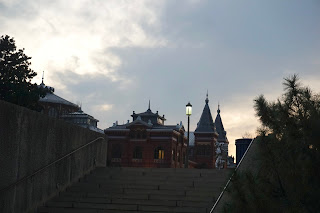 Where we visited Yoko Ono's wishing tree, and made a few wishes of our own. 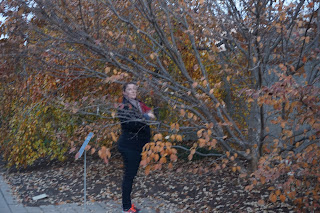 (Blurry because it was really getting dark.)  Serendipitously, we got there just in time to hear the sound sculpture that is part of the garden, and which is triggered by the fading light of sunset.

We walked on the mall in the gloaming. 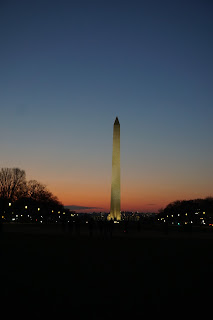 We also took a last walk in Rock Creek park on Sunday afternoon. 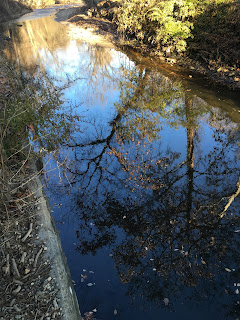 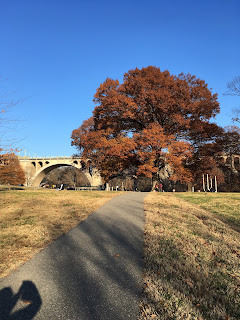 before taking the long steep (!) escalator 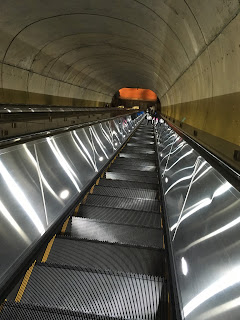 down to the train, and thence to the airport, and making our various ways home.
Posted by Jocelyn at 8:41 AM