True confessions time.  I never saw a roadrunner in person until after we'd moved down here.  One day, soon after we moved into our house, I looked out the window and saw this bird walking up a tilted tree trunk.  My first thought was, literally, that looks like a miniature roadrunner!  Because there was no way that a real roadrunner (per the image in my brain) could actually get up into a tree.

Which really tells you all that you need to know about my understanding of roadrunners.

I can't possibly be the only one who only ever thought of roadrunners in the context of Wile E. Coyote.  And folks, in that cartoon, Coyote and Roadrunner are very close to the same size: 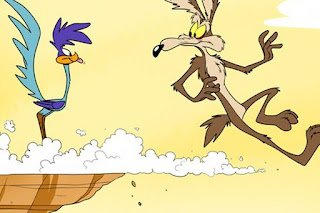 I mean, that Roadrunner is, at minimum, up to mid-Coyote's chest, right?

Not right.  Coyotes (which I see a lot) are about medium dog sized, with longer legs, proportionately, than most dogs.  Roadrunners are not - I repeat, not - about 2/3 the size of real-world coyotes.  If a coyote stood up on its hind legs, a roadrunner could not (again, I repeat - not) look it in the eye.  Greater roadrunners are maybe 20-24 inches from beak to tail.  And that's pretty big, based on the ones I've seen around here. 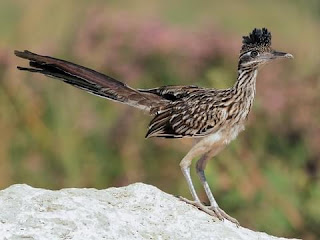 (Not my image). They do, though, actually stand around with their tails straight up, like Roadrunner does above.  It's very distinctive, and it's why I immediately classified that bird as somehow being roadrunner-adjacent. The only reason I couldn't actually get my head around the idea that it really was a roadrunner, is that I truly expected roadrunners to be (I hate to even write this, it's so embarrassing) sort of more, well, emu-sized.

The first time I saw a real roadrunner (a picture, I've never seen one in person), I was greatly disappointed that they were not emu size.