Fun with a gallon of milk

Boy howdy. It turns out you can have an amazing amount of fun with a gallon of milk if you have the right add-ons. Last night, I received in the mail my kit for making mozzarella (from the Cheese Queen, whose site is just wonderful fun, if you're a food kind of person, which I am). So, older daughter and I decided to see just how much fun could be had with a gallon of milk, some vegetable rennet and citric acid. It turns out, a whole lot. Did you know mozzarella, in the making stages, it stretchy? I mean, who knew? (Other than a whole lot of Italians.) You can even braid it, or make string cheese out of it. Of course, we were getting too excited about eating it to actually do any of those things, but the point is, we can. The kit I got has enough stuff to make 30 pounds of cheese! (Grommit -- am I the only one who helplessly says that after saying cheese?) And for dinner, we had BLTMs, with the bread that I also made yesterday. It turns out that after having people in my house for a few days, the way that I take back my space is to cook in it. Bread is particularly good for this sort of thing, since it takes a while, involves lots of puttering, and smells really good. Also, I get all kinds of props from DH and the girls, who think that homemade bread is the bomb. So that's all good.

We did, in fact, make it to the Scottish Games near our house on Sunday, and great fun was had by all, but (if you can believe this) I forgot my camera. So, the men in kilts will just have to live on in my imagination (feel free to imagine them yourselves, if you like, especially the darling one with the bright red hair who smiled prettily and said kind things to my daughter after she stepped on his foot: "it's OK, we'll share", he said, "I'll use the bottom half, and you can have the top half" -- I mean, how charming is that?). Unfortunately, the Wicked Tinkers weren't there this year (and I mean to have words with someone about that, just as soon as I can figure out to whom to address them), and I missed the glorious noise that they make (that and the fact that my younger daughter usually naps during their concerts; I don't know what it is about bagpipes and bodhrans, but she's clearly got more than a bit of the Celt in her from me).

I also did something that I've been contemplating for years. Really years. When I was a wee lass, after having taken piano lessons for a long time, my parents, being the musical sort, asked me what instrument I'd like to try next. My answer was prompt and unequivocal: Bagpipes. Theirs was equally prompt and unequivocal: Over our dead and rotting bodies. Alas. However, since I am now the grown-up (shades of our President: I'm the decider), I can do as I please with regards to loud musical instruments, and I bought myself a chanter. Of course, early attempts suggest something more akin to a dying duck than anything else, but I hope to improve someday (with luck, before I add a bag and drones to the assembly). Wish me luck!! (And if anyone out there has tried this and has any advice, I would be eternally grateful.)

Knitting also took place. I am on the last repeat of the basketweave part of Hanami (yay!!): 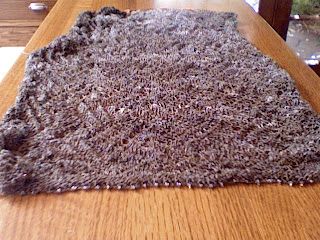 (please excuse the odd angle -- I didn't want to wait for photos to download from my camera, so I am trying to play with the one that's in my computer). An artsier shot: 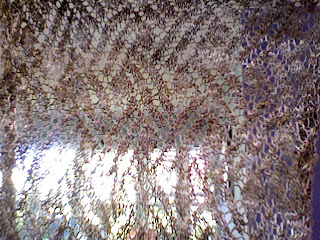 It's just lovely, and I now have to decide if it's long enough to be half done, or whether to do an extra repeat -- I just wish I had a better sense of exactly how much it will stretch... We'll see.

I also finished one traveller's sock, and the other is on its way. The picture here is much more embarrassing (in terms of its commentary on my extreme lack of artfulness), but I'm baring all here (see above discussion regarding men in kilts and bagpipes), so: 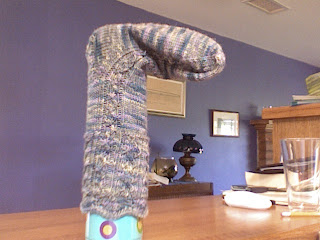 I actually like how the colors and the stitchwork go together on this one (whew!). And, I finally put together the pieces of needle felting I did to make a tea cozy: 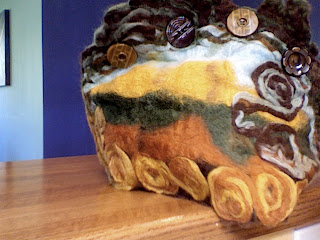 See the buttons? Those come from my husband's Grandmom's button box. What a treasure trove -- I spent almost 45 minutes going through it before I could choose! Now it goes off to my LYS for display before the needle felting classes.

So, any advice on bagpipes or on the relative stretchiness of lace cheerfully accepted here. Tomorrow, I'll show you the garden we planted.
Posted by Knitting Linguist at 10:59 AM