Of sex and socks

The other morning, when listening to NPR, I heard a report that I thought must be, surely dear god please let it be, a joke. But I'm pretty sure it's not. And not only because NPR is generally pretty clear about when things are jokes (at least, after they're done laughing), but also because this kind of thing is rampant, and I really should know that by now (oddly, in one of the world's synchronous moments, Enchanting Juno just wrote about another instance of the same sort of thing). They reported that universities, having noticed that more women are applying to college, and that there are therefore more women among their students, have begun accepting a higher percentage of male applicants in an effort to right the imbalance.

In other words, the same universities who so often scream about having to consider whether they are ensuring some kind of ethnic diversity, who call it reverse racism and sexism to have to consider whether they are making enough space for minorities and women, those same universities are so upset at the idea that there is a gender imbalance, in favor of women, that they are fixing it immediately. No mention of the hundreds of years in which gender imbalances in favor of men were seen as the natural order of things; no, of course we're not mentioning that, because this is a clear indication that a gender balance in favor of men is STILL understood to be the natural order of things. Otherwise why work so hard to bring it back the moment the scales tip the other way?

I should not be surprised. I really shouldn't. I teach at a university, where my students consistently express the belief that feminism is evil, or at the very least misguided (I kid you not), that women are subject to hormonal surges that are abnormal in some way, and that male behavior is the standard against which female behavior is to be judged. I teach a gender and language class, and students regularly suggest that it is strange, and in fact sexist, for an author to deliberately write a book with all female characters -- that to do so is some kind of strident feminist plot. I ask what we should call Hemingway then, masculinist?

I think I get to them. A little. Sometimes, on the good days. On the days when I point out that men have as many hormonal surges as women, we just don't have names for them. And we don't suggest that a male president might push the little red button in a fit of testosterone rage, even though I grew up hearing that a woman couldn't possibly be president, because she'd get us into a nuclear war while dealing with PMS. This is a world in which, when a state governor is pregnant with twins (and therefore must, gasp, give birth to them), her ability to continue to govern while dealing with this health crisis is seriously questioned, while male governors undergoing surgery for prostate cancer (a potentially life-threatening disease) are not considered compromised at all. Neither are male governors who are about to become fathers.

It's depressing. It's sad that when I ask my students how many of them consider themselves to be feminists, I'm lucky to get two hands. And those are usually from women who are returning students, and therefore from a different generation from my young twenty-somethings who think that the war for equality is over and won, even though real wages for women are once again falling relative to those of men. I tell myself not to despair, that there are good people working to change all of this, and that reaching even one of my students is one more person who realizes that we still need to be working on this, but it's still frustrating.

All right, on to knitting. I got a lot of knitting done yesterday, both on my sock and the stole. The best bit about the sock is that I can work on it while reading because I'm at the part where it's almost all stockinette: 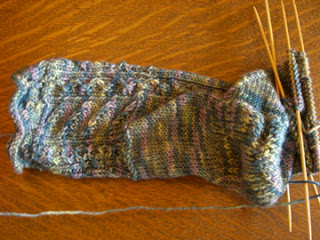 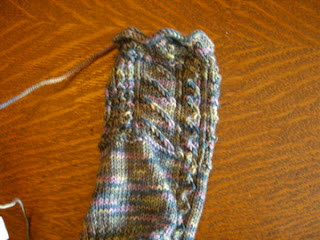 It's Socks That Rock in the lightweight, in the Lunasea colorway. I really love working with that yarn -- I made DH a pair in the mediumweight, and this is my first pair for me. I'm using one of Nancy Bush's patterns from Knitting on the Road, the Traveling Sock. I had to mess with the pattern a bit to make it fit (it was too big with the gauge I was getting), so I took out one of the lace panels, and made the lace part a bit shorter. I am never sure whether I like doing this kind of more complicated stitchwork with a variegated yarn -- it never seems to show off the color qualities of the yarn as much as I like, but then, I'm not sure that plain stockinette does either. 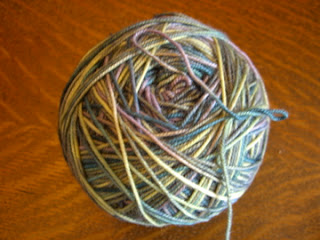 I think I'm going to have to jump on the Monkey bandwagon for my next pair, and see how that goes. It'll give me an excuse to order more STR (and who really needs an excuse for that?).
Posted by Knitting Linguist at 5:39 PM