Well, I think we've settled in, finally. Just in time for my mother-in-law to come take the kids to visit my parents-in-law on the east coast (eep!). But that's its own post. Part of our settling in has involved getting a new kitten. We have a cat. We used to have two cats, but our baby girl disappeared a year ago. Since then, Gwilim has been a single cat. He doesn't seem to mind most of the time (although he occasionally wanders around meowing loudly the way he used to do for Rhiannon), except when he's hunting. Once upon a time, when he caught something good, he'd bring it to his baby sister and let her play with it for a while (she just wasn't a fan of hunting things up for herself). Since she was lost, however, he hasn't had anyone to share with.

And share he does. Mice, rats, gophers (one notable evening, the gopher wasn't even close to dead when he brought it into our bedroom; it woke us up gnashing its teeth at the cat), birds, lizards. We argue vociferously with him about the birds and lizards, but for the rodents, we let it be. But it's gross, and I don't enjoy scrubbing bloodstains out of the carpet. Hence the kitten. We're hoping Gwilim will be inspired to share with him, instead of with us. We named him Atticus. 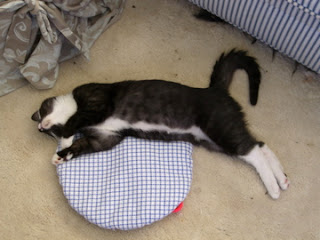 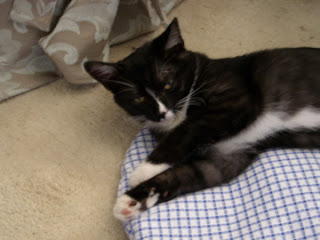 He's pretty cute, and we have high hopes of him.

And, speaking of growth, remember the garden? Here it is now: 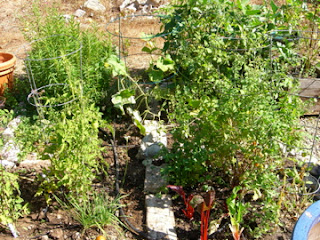 Buddha finally has some shade. 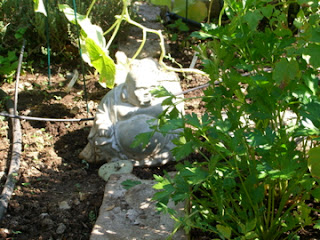 I spent two hours yesterday, weeding and harvesting. I think I finally had a Garden Moment. Those of you who garden know what I'm talking about; that feeling of timelessness that comes with moving slowly from plant to plant, weeding and untangling, checking how each one is doing, picking what's ripe and admiring what's not. I have not had one of these moments before; it reminds me a little bit of the first time I got one of those Second Wind moments that runners are always going on about when I was racewalking and I suddenly felt like I could go on forever. That's how yesterday was. It was a sort of moving meditation, and I found myself slowing down and relaxing and just feeling how good it was to stand (or crouch or bend) near all of these lovely growing things. And the girls were so excited about their cherry tomatoes and yard-long beans. All of them have been harvested, but there're more coming. And the squash blossoms are still so lovely. 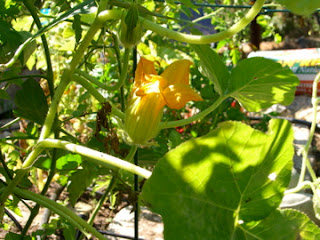 It's hot, though. Even the dog says so. 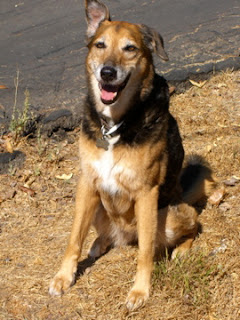 I wish we could spend all of our time in the shade. 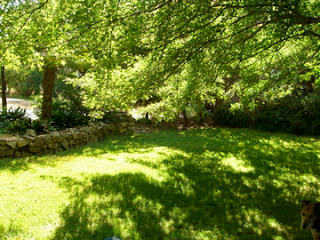 Yesterday, we finally set up a clothesline, which I've been wanting to do for ages. I remember hanging clothes out with my grandmother when I was young, and how much I loved it then (I do realize, however, that part of why this is fun for me is because, unlike my grandmother, there are options; I don't have to hang the clothes on the radiator to dry when it's wet out. I said to Rick it's funny, Nana hung clothes out because she couldn't afford a drier; I'm hanging them out because I can't afford an air conditioner! I guess this is a sign of progress.). I had to share the clothes with Rick, though; he wanted to hang them out, too. I think all of us were enjoying slowing down to do a simple task like that.

Last, but not least, the sock is growing. It's on my leg here, instead of my daughter's (she's at soccer practice), but you get the idea. 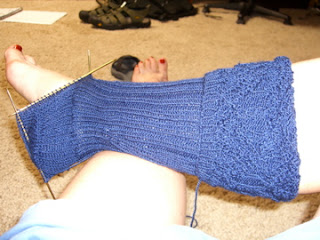 The heel is turned, and I'm headed down the foot. I may actually have these done for the first day of school (the day after Labor Day). Woot!

Now, I just need to be sure that I'm ready for MY first day of classes, on Thursday. I'm teaching a class I've never taught before, and the syllabus is confounding me. Although I know that I'll be glad to be back with students after the first week or two are over, when I know some of their names and I feel like I'm on top of my material, the first couple of days are always hell for me. Given that I am, at heart, fairly shy, that I prefer not to hang out with crowds of people I don't know well, but would rather be with small groups of friends (or even by myself!), teaching seems like an odd avocation for me. But I must admit, I do love it. Just gotta get over these first couple of days. Send me bold, confident thoughts!
Posted by Knitting Linguist at 4:19 PM

There's something so satisfying about hanging out the laundry; the smell and crisp feel; the connection to the past. I think you would enjoy Cornflower's laundry post with wonderful pictures:
http://cornflower.typepad.com/domestic_arts_blog/2007/04/art_in_the_gard.html