So, I figure I'd better write the post about our trip to the UP (whose inhabitants call themselves Yoopers) before I get so far into new things that I never get back to it. First, true confessions. I took with me this: 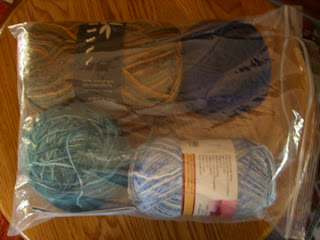 (plus one more ball of the blue yarn). And by the time I got back, I had knitted this: 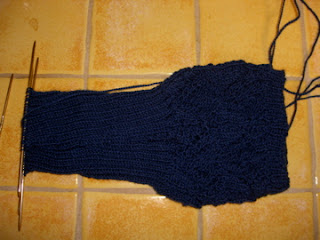 Is that pitiful, or what? I know that I am going to be glad when I am done with these that I knitted them, but I have to confess that I'm not enjoying the knitting of them as much as I have with other things. The lace pattern is beautiful, but it involves k3tog, and I really hate knitting three stitches together, no matter how it's done. I tend towards the tighter side of knitting, and getting into three loops isn't easy for me. And the rest of the sock is 2x2 rib, which, while Cookie has done an amazing job of creating lovely texture with their movement, is most definitely not my favorite kind of knitting (yarn forward, purl two, yarn back, knit two, yarn forward AGAIN, purl two, yarn back AGAIN, knit two, ad naseum; it just doesn't go as fast as it feels like it should). I also had to start the darned things three times. First, because I didn't have the latest version of the pattern, then when I did, the needles I was using were too big. Third time was the charm, though.

Don't get me wrong. They are beautiful socks, and I know that T is going to love them when they're done, so that's worth it. But you know how sometimes you learn something about yourself as a knitter when you work with a pattern, about what you do and don't like to do? Well, this is one of those learning experiences. I imagine there are some people for whom this would be a blast to knit, rather than an eye-on-the-prize knitting experience.

So, clearly, not too much knitting got done on this trip. However, a great deal of relaxing got done. There were times when I'd take my knitting out and find myself just sitting and feeling very much at peace, watching the lake. 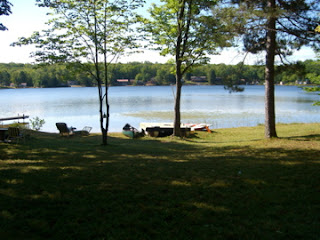 There are bald eagles nesting there, and we could hear the fledglings calling to their parents all day long (hungry little buggers). And there were loons this time; I don't think I'd ever heard a loon calling in real life before. They remind me a little bit of coyotes, in that they sound closer to human than not. The camp where we stayed is an old army barracks that my sister-in-law's grandparents bought years ago. The story is that these barracks were being sold off after WWII, and her grandmother went to get one for their farm, but when driving it back, got to an underpass that she couldn't get under. Casting about for something to do with it, she noticed a lot for sale on this lake, bought it, and put the barracks there. It's been a family camp ever since. It's rustic (although less so than it used to be -- it has showers and indoor toilets now!), but that's perfect, since I don't feel compelled to worry that my wet and sandy children are likely to ruin someone else's home. This place as been through it all. 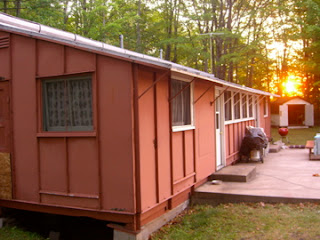 The girls had a blast, as did Rick. He grew up on a lake, and I always forget how much this is really his environment, until we go somewhere like this, and he spends every waking moment on the water. He waterskied, and took the girls tubing, which they loved (OK, I confess, I went tubing for the first time, and loved it too). And they had great fun with their cousin. 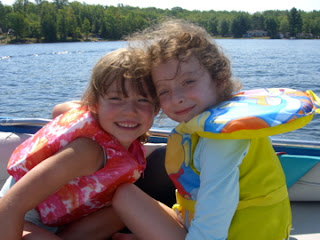 We went to Lake Superior (dang, is that huge, or what?; the girls kept calling it the ocean), 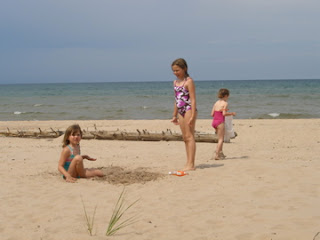 and down into a copper mine for an hour and a half tour (no lights, just the headlamps on our helmets; the girls thought that was pretty neat, especially when the guide had us turn them all off so we could see how little we could see by the light of one candle, which is apparently all the miners had per group of three men). 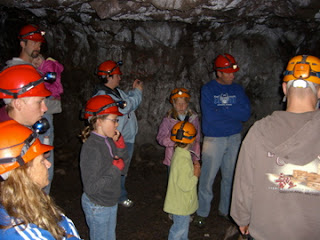 Getting there is always a bit of a bear. We fly into Chicago, and then we have to drive about 500 miles north to get there (sort of like flying into San Diego to go to San Francisco); there are just no reasonably-priced flights from here to there. (Chicago was fun, though -- we took some time to see the Millenium Park on the way home.) 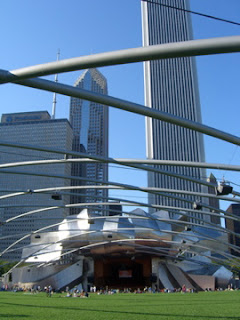 In the end, it was a good week. I didn't think about work, or about all the things that I had to do when I got home, I just enjoyed being with my family, and watching the girls be excited about everything that we were doing, and roasting marshmallows over the fire, and watching the sunset (at 10:00!!), and seeing the Milky Way. I find that just being near water, watching the play of light on it, and seeing everything that lives near and in it, is a renewal of some kind; I feel a sense of grace, and of timelessness. I feel, very viscerally, the sense of that old saying, All will be well, and all will be well, and all manner of thing will be well.
Posted by Knitting Linguist at 9:19 AM

LOL, I always pack way more yarn and fibery stuff than I can barely begin to do anything with. I forget that when I go camping I enjoy a bit of knitting or spinning but I love just being.

What a resourceful grandmother! What a perfect opportunity. That red is perfect for the barracks. When I was a teen we lived in a house that had been a WW2 barracks; long and narrow.

I've long dreamed of living beside a lake, or wide river. Being near water fills my soul.

All in all the trip sounds like it was wonderful.