Well, I promised you spinning and pickled herring, and though I am a day late, I will deliver.

First, the spinning, so that those of you who actually read this for fiber content can leave before we get to fish and vinegar. The two shall not, following the sage advice of Ms. P, be mixed (voice of experience here? inquiring minds want to know...). I'd hinted around to Rick (read: sent him urls which had everything I wanted) that the time had come for me to make an attempt at this spinning thing. A week or so ago, it occurred to me to check in with him and to suggest that, should he have chosen an alternate present route, it would be good to know, since all of my visions of Christmas day involved playing with roving and spindles while the girls played with their new toys, and we would all hate for me to be disappointed (OK, well, I would hate for me to be disappointed). He admitted that he had taken a different path in his gift selection, and I hastened to rectify the situation (in the end, these are presents from my parents who, having long ago given up on figuring out what I might want, kindly send me a little check each year so I can choose my own thing. This year, it's spinning. Thanks, guys!).

First, I ordered books. I had scoped out Amazon a few weeks ago, and come across these (offered together in one of those nifty deals that Amazon has that sucks you into buying more than you'd intended; in this case, though, I'm glad). They were Priscilla A. Gibson-Roberts' book Spinning in the Old Way, and A Handspindle Treasury from Spin-Off. Then I got in touch with Wanda and emailed with her about getting a Turkish spindle. Then I waited. I think that the postman started to think that I was "lonely", the way I was always waiting in the driveway for him. The books came, and I read them cover to cover in a matter of days. And I kept waiting. Finally, on Friday, my package from Wanda came. I would show you how she wrapped it in lovely holiday paper, except that I was too excited to take pictures before I unwrapped it (no, I am not ten years old).

The spindle is gorgeous. It is such a treat to have a tool that is made by a craftsman whose care in his work shows through so clearly. I have always loved William Morris' quote, "Have nothing in your houses that you do not know to be useful, or believe to be beautiful." It has occurred to me, though, that even better might be, "Own nothing that you do not know to be useful and believe to be beautiful." I think that this spindle falls into that category. And, making it even better, it came with instructions (for which thank goodness), and wrapped in some pencil roving. How did Wanda know that I'd want to try to spin right away and not have been wise enough to ensure that I had roving on hand? (I have rectified that problem since.)

While I haven't had as much time as I'd like to play with this (most of the little fiber time I've had has been devoted to working on Rick's socks, which, I am pleased to report, are almost done), I had to at least try. 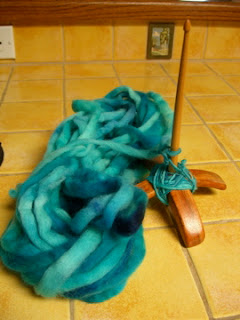 Isn't the roving a gorgeous color? Isn't the spindle pretty?

Can you tell I'm trying to distract you from the first attempts there? Can't fool you. Here's a closer shot, just in the interests in exposing myself to the world. 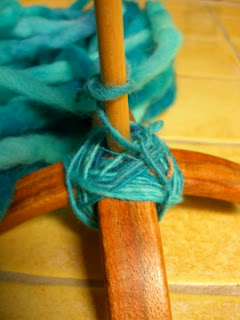 I'll get better, I promise. I'm having fun, though!

Of course, I'll be having more fun when tonight's party is done. I've been cooking, almost straight through, since yesterday morning. I made granola to give people as gifts: 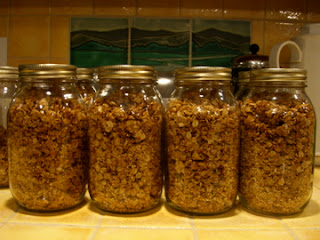 Most of what I've been cooking is part of the traditional (read: set in stone) menu that Rick's family has been cooking for Christmas eve lo these many years. The only thing I've changed is to axe the head cheese. I really dislike aspic a lot. Other than that, though, it's pickled herring, which Rick makes. 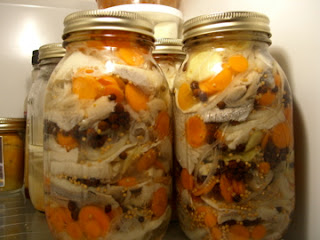 Isn't it pretty? While I'm not necessarily fond of the fish, the veggies are quite yummy (although we have to warn people every year not to eat the horseradish root he puts in there; it'll take the top of your head off). I made pickled red cabbage (note the emphasis on vinegar here; I can only imagine what things had to come out of storage for this meal in traditional Scandinavia). And rod grod (imagine umlauts over those vowels, if you please), which is a berry pudding. Also cucumbers in vinegar. And meatballs. Five pounds of meat's worth of meatballs. My lovely stove is my workhorse at times like these. Give her a hand. 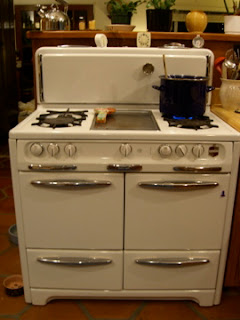 (The rod grod is cooking there.) And I made the braided cardamom bread that we have for Christmas morning. 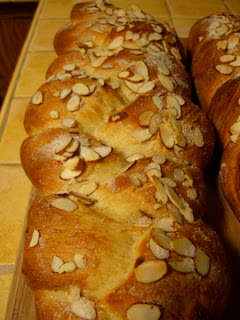 The rest of tonight's dinner is boiled red potatoes (to serve with the herring; a man on NPR observed the other day that, the way you serve these traditional foods with other things to cover them up, as well as with liquor and beer, it's as if they're ashamed of the way they taste -- I laughed all the way home) ham, and rye bread, and cheese, and then butter cookies and whipped cream with the rod grod. There's aqvavit (to be drunk in shots with the pickled herring; I wonder why?), and Rick makes glogg, which I have to admit I adore. He makes extra every year, and we spend the next week microwaving a mug now and then in the evening. (It's red wine and port, mulled with oranges, almonds, raisins, cloves, cinnamon, and cardamom pods, for those who are not so lucky as to have married a man of Danish extraction.)

I'll probably be offline tomorrow. If, indeed, I finish the last inch of Rick's socks and weave the ends in, then my plan for tomorrow is to spend the day playing with my new spindle (I swung by The Black Sheep on my way home from errands and got a bit of extra roving; it's not exciting, but it'll do to practice until I get the good stuff -- more on that in another post). Glade jul; a toast to you all!
Posted by Knitting Linguist at 1:36 PM

I'm excited for you about the spinning. What you've done so far looks good to me!

I have to admit that I probably wouldn't eat dinner tonight if I lived in your house. I *might* eat the rod grod depending on the berries. The meatballs depending on the meat. But most everything else is pretty much out, especially anything made with vinegar. I've made myself dinner to go with Chris' family's traditional meal because I won't eat that either. :) Terrible picky eater.

Congratulations on your beautiful Turkish Spindle (yes, it DOES deserve 'caps')...and hey... it looks like yarn to me!

I wanna come spend Christmas Eve with you... ok, that was last night, still... now I'm wondering if I've some Danish ancestral memories floating around in my soul :^)
Wishing you a day of peace and spindling today... XOXOX

Congratulations ... today's the day I get to break out my new spindle too! I'm thinking about getting in the car to go to the WEBS sale this week, since my spouse chose a different direction for gift-giving as well. Now I have spinning titles to add to my list. Have a lovely lovely day.

Having never tried spinning myself, I can only say that your early efforts look like yarn to me, and that's great!

What kind of stove do you have? I'm an old-stove person--I inherited my grandmother's 1954 Gaffers and Sattler, which we're saving up to restore (we'll need to send it back to the West Coast whence it came, since restorers seem to specialize in East Coast or West Coast stoves). But when we bought the house we have now, it came with a cranky 1956 General Electric stove--gorgeous to look at, but a cranky bear to cook with. All my cookies have black bottoms this year... :(

first the food, yum, it all sounds so yummy. Here christmas is a weird blend of winter feast foods, and summer harvest foods - given we are n the middle of summer yet mostly have a British European heritage. But the food you describe as part of your christmas tradition - heavenly. And glogg, that is something I am going to have to investigate for winter time.
And the spindle work, it looks good, I can't tell you how many times my spindle hit the floor the first week or so. That colour must feel so good to work with. enjoy.

The granola looks so good!