Or news, for that matter. The wheel should be coming soon. It turns out that the seller got caught in a nasty ice storm (in Illinois), and lost internet for a few days there. But she said she'd be shipping either this past Friday or tomorrow, and that it should take 3-5 days once it's shipped. So I'll keep waiting. Of course, the road to spinning apparently never runs smooth, and I'll be gone as of Thursday for the whole weekend, which means that it'll probably arrive just in time for me to not spin with it.

We're headed to the Bay Area to celebrate Rick's grandmom's 94th birthday, which will be the week after this one. So I really can't complain, as I'd rather celebrate with her than be here, even for a wheel delivery. It's a long trip for a short time, but it's one of the occasions that we have tried to always make it up there, ever since moving away. It's always simultaneously wonderful to see her, and all of our family, and difficult, as I remember how much I liked living near all of them. And to go this time of year, when the hills are covered in green, and the ceonothus and scotch broom and douglas irises are all in bloom, is even harder. I'll be sure to get a few walks in while we're there, although I know I'll miss having Kia along with me; she was always my trusted companion on all hikes, but it's a long drive for her, and we probably won't bring her along.

It's been a busy weekend, with not much knitting, but a lot of errands. We had a friend's daughter to stay the night on Friday and all day Saturday, so the girls had great fun. In the middle of that, Younger Daughter had a birthday party to go to, and then we all headed off for a piano recital at which both girls were playing. Of course, I'd just found out on Friday at their lesson that I was to be part of the recital too (a duet with each of the girls), so there was the bit of added frisson, as I am not fond of performing in front of other people (I know, I know, I teach; what can I say?). However, I failed to utterly screw up either of the girls' pieces, and they both had a wonderful time, so all is well.

Today, Older Daughter had a birthday party to go to, and Rick had traffic school, and Younger Daughter and I stayed home and did laundry. So again, not much knitting. But I did promise you finished sock photos. Here they are, badly lit, as Older Daughter didn't get home for pictures until after the light had gone. 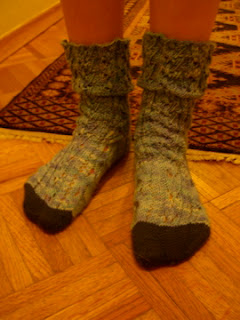 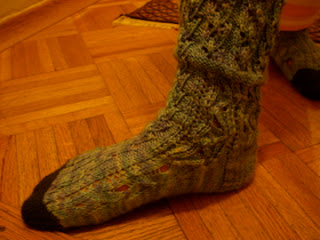 To recap. These are the Violets Rising socks, by Anne Hanson. I was test-knitting them, so the pattern is only available right now as part of a sock club. I knitted them in Dream in Color Smooshy, on my size 1 sock needles. The toes are in Cherry Tree Hill Supersock, because I was worried I'd run out of yarn (I'd already knit a pair of mitts out of the DIC); it turns out that I probably could have done the toes and been just fine, as I have some left. Ah, well. I really had a blast with this pattern; it made the knitting go quickly, as there were several different bits, with just enough paying attention to keep me engaged, without being too overwhelming. I'll definitely knit a pair for myself at some point.

I'm also knitting the second of the SoSquare socks for Rick. I'm done with almost all of the leg (half a pattern repeat to go), and I'm hoping I'll have a chance to turn the heel either tonight or tomorrow night. I'm getting a bit tired of endless non-knitting meetings at work, I must say, as the knitting goes slower under these circumstances. I'm also still contemplating the skirt. I'm thinking of ordering some Rowan denim online to make a skirt out of, as I didn't make it to the yarn store on Saturday; I was still dithering over whether I really wanted to buy new yarn to start the project and figured it was better not to go until I'd decided. Meanwhile, I've been staring at the swatch I did of the cotton/linen blend and wondering whether it mightn't make an interesting kimono (why yes, I did get Kimono Knits for my birthday, why do you ask?).

However, I spoke with one of my dearest friends today, who just found out that her baby, due in early April, will probably be making an earlier appearance than expected (like, very soon). So I now think that I should probably consider busting a move on some baby goods, and have been staring contemplatively at my stash baskets all day, wondering what I should try first. Maybe a pair of little socks would ease me into the baby knitting thing? I do have that bit of DIC left over...
Posted by Knitting Linguist at 7:15 PM

The wheel will surely arrive moments before you leave, but as long as it does arrive, you'll have it to look forward to when you return! How exciting that it's on its way!

I totally understand not liking to play piano in front of people, too. I am not a fan of recitals, though I have no problem teaching, speaking, singing, or even playing guitar in public. There's just something about piano that's a little more formal and a little less forgiving, I guess. Glad your duet went well. =)

How about the baby kimono pattern Sheepish Annie has featured? It's a darling pattern!

Sorry to hear the storms have held up your wheel. Maybe it's with the giant & long-anticipated order of very special swim team towels, also delayed due to weather ....

Enjoy the Bay area. Enjoy, enjoy. I spent a decade missing my home place and guess what? We got to come back. Now there are actually some things I miss about the sojourning places.

The baby kimono pattern AND the DIC baby socks... :^)

You certainly have enough yarn on the needles to keep you going until the wheel arrives.

And all that knitting time in the car on the way to the birthday party. Do you have enough yarn for the trip, or do you ned to make an emergency lys run?

BTW, MamaMia told me there was a big quilt shop round robin this weekend in San Diego (county, I think) where people took 'passports' to each shop and got them stamped to enter a contest for fabric. She won some squares at one shop!

Those socks are fabulous! Nice job. Enjoy this time before the wheel arrives. It will take over your life once it makes itself home. But in a good way! A very, very good way!!!!

I anxiously await the availability of the Violets Rising pattern. Half of my anticipation is the name, which just makes me feel like we are on the verge of a johnny-jump-up rebellion, and half is the lovely pattern, which you have executed so nicely.

I will join in the voting on baby things to knit and suggest that spinning the yarn for baby socks wouldn't add much time at all to the knitting, would it? ;-)

I'm glad your, I mean the girl's recital when well.

The socks look great and won't it be nice to have a finished pair for Rick? And baby knits. I love baby knits, too bad I don't know any babies!

If that baby is coming earlier than anticipated,the sox are a great plan. And though I hate to be an enabler, it would be lovely to follow it up with a Tulips cardigan!

You are gonna be one happy gal when that wheel arrives!