I took these pictures yesterday, but didn't get around to posting them. I also didn't really make the list I'd promised myself I would (maybe this morning?), but I did begin to do some research for two of the projects that are hanging over my head, so I didn't completely fall down on the job.

Here it is, off the pins. I love this scarf! 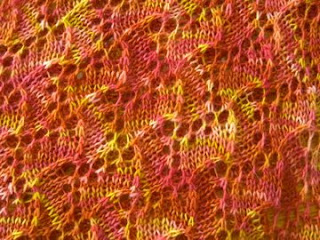 I know I've said it before, but this stitch motif is so lively, and combined with the flow of the colors in this yarn, it's vibrant, without being overwhelming. It's not overly-long, which I like; it is the kind of thing that can be tucked into a collar to keep the chill off (I was hard put not to wear it yesterday, as it was bit breezy and cool, but I made do with Gust instead)(I know, my life is hard). Here it is, wrapped around my neck. 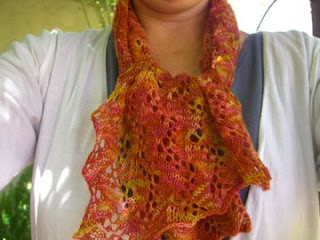 Not the world's best picture, but it gives you an idea of the length (it turns out it's hard to take pictures of yourself!).

On Monday, I'll be giving this scarf to my friend Patricia, for bravery and generosity above and beyond the call of friendship. I've been thinking a lot lately about the fact that I am not particularly good at accepting what I might call random acts of kindness directed at me. This has been borne home to me in a couple of ways this semester, and I think it's one of the long-lingering remnants of some very deeply-felt insecurities (of the "how could I possibly be worth this kind of effort on the part of other people" sort). One of the things that has brought this home to me is how worried I was at the beginning of the semester about asking my friend Patricia if she'd help me out in a class, and how much more worried I became when she said yes (what if she hates it? what if she has a miserable time? what if she never wants to talk to me again when this is over? -- that kind of thing).

The class I have been teaching is a course in linguistic field methods. The idea is to give students a taste of what it would be like to be a real, live field linguist, faced with gathering data about a language they don't know and then analyzing that data with an eye towards documentation. This, of course, requires a speaker of a language that none of us knows (the course tends to go even better if the professor also doesn't know the language; students then get the experience -- and the faculty member gets the stress -- of seeing the professor analyze data on the fly). And my friend, originally from Senegal, speaks not only English and French, but also Wolof. And when I asked whether she'd consider being our consultant, she said yes.

She said yes, in spite of the fact that she was nervous about it, not having used Wolof in regular conversation for some time. She said yes, in spite of the fact that this meant coming to campus right after working all day with preschool students (she's a Montessori teacher, and we know how much I admire people who have the patience to work with small humans all day) to spend two hours working with college students. For the first half of the semester, she also had to pick up her two children and bring them to the class with her, where they amused themselves like troopers in the back of the classroom.

And let me tell you, she made me look good in there! She's the kind of consultant that every linguist wants. Patient, willing to repeat herself endless numbers of times (maybe the Montessori training coming through?), engaged in the process, and charmed every time she figured out what it was the students were trying to learn about Wolof; having a speaker say, "I never knew my language did that! How neat!" is every field linguist's dream. And because she is that kind of person, because she was friendly, and patient when my students had trouble writing what she was saying on the board, or when their questions didn't make sense the first time, she made my students' jobs easier, which made me look like I'd planned this whole thing to the hilt, instead of just being along for the ride (which is what fieldwork is really all about).

And she did all of that, just because I asked. I tell you, that's a lot of pressure for a person who would just as soon not put people out on her behalf if at all possible (that would be me).

It's the kind of thing that reminds me that many people really are, at heart, kind. And that people really do commit selfless acts, just because it's the right thing to do, or because they care about the person they're helping. It's a nice thing to be reminded of. And so I'm going to give her Boing! (which fits her personality in so many ways -- she has to be one of the most vibrant people I know), which is a small thing, but what I've got right now. From the moment I finished the first pattern repeat, I knew this was her scarf, so on Monday, off it goes, with my thanks for both making my class fun enough that I wish it wouldn't end (!!), and for reminding me that acts of kindness offered with grace should be accepted with grace. I'm working on it.
Posted by Knitting Linguist at 8:25 AM

Patricia is a true gem of a human being, inspiring.
She's gonna love that Boing!

I have issues with that same 'thing'...

Will you be meeting up with Anne since she's in your neck of the woods?

Oh MY! What a good friend. And what a fun class that must have been!
Boing is beautiful and will no doubt be treasured.
YOU are also a good friend!
(((hugs)))

You have a really lovely friend. It sounds like it would be a fun and interesting class. I hope she loves the scarf, it is absolutely beautiful!

What an inspiring story to end my week! Patricia truly is a precious being, and I'm sure she'll love that gorgeous scarf. You are also a good friend for knitting away at that lace. What a great gift.

I love your boing and even better your story. It sure sounds to me like Patricia really deserves this beauty!

It's a gorgeous shawl! The class sounds great. Are you going to make a smaller one for Older Daughter?

Good friend, indeed. And sounds like a fun class! (and successful)

Patricia sounds like a gem and that scarf is so beautiful - of course you have to give it to her! I'm glad the experience turned out well for all concerned.

The class sounds like it was wonderful. Yes, Patricia gave you a gift by being the wonderful consultant you describe, but you also gave her a gift by providing this opportunity for her to share in this learning experience.

And the scarf is also wonderful - great pictures!

It is nice to hear and see people doing great things for each other.

The scarf is lovely...she will appreciate it as much you you appreciate her help. I imagine she will think of you each time she wears it!

Patricia is a good friend! It sounds like your class was fun and informative for all of you. Clearly deserving of Boing! which is pretty spectacular itself.

It looks like you have a great scarf for an even more wonderful friend. You must be very lucky. :)

I won't go into why, but that's exactly what I needed to hear today.

Boing is absolutely fabulous! Patricia will certainly love it dearly and I bet it will remind her of the experience of working with your students. I visited Senegal last fall and if her skin is richly dark like most of the Senegalese I met, those colors will be smashing on her! When word get round about how you show your appreciation, don't be surprised when you have volunteers by dozen for your next field study!