This morning I finished the first half of the edging on Lacewing while Rick and Younger Daughter were getting packed to go to the airport. Not having to sit through three hours of soccer camp every morning has put a serious cramp in my knitting style (I know, I know, cue the violins), but I am still hoping to get the second half of the edging done by the end of the weekend. For some reason, the camera is missing in action, but here's a PhotoBooth shot to prove that I'm not making this stuff up. 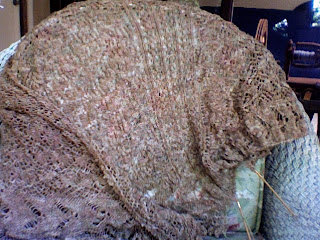 I don't know if you can see the lacewings along the edge at the bottom left of the picture, but there they are. And you can see what's left on the needles; I'll probably cast on the few stitches needed to start the right edging while waiting to pick Older Daughter up at school this afternoon.

I'm living in a state of trepidation, however. This is how much yarn I have left. 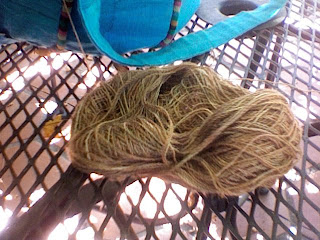 I think it's going to be a very very close thing. I'm really hoping that I won't have a repeat of the Icarus Incident, when I ran out of yarn over halfway through the cast-off row. At that time, the place where I'd bought the yarn happened to have one ball of kidsilk haze left in the right dyelot, which saved my bacon, but I'm not too sure if I'll be able to find this yarn again (Chewy Spaghetti merino/silk blend). I'll see how things are looking as I get through the edging before I crumble and call in the troops (read: post a panicked message on Ravelry), but keep your fingers crossed for me, 'k?

Meanwhile, Older Daughter is getting through her second week of school; she has told me that she no longer feels that constant low-level queasy feeling she had all last week when she was worried that she wouldn't know where to go or what to do. And she's made a couple of friends whom she eats lunch with (with the result that she appears to actually be eating lunch, which wasn't the case last week). This is all good.

Rick and Younger Daughter are off to the east coast to visit his parents and to go to his cousin's wedding. We would have loved to go, too, but didn't think that it was such a hot idea for Older Daughter to miss days of school in her second week. As a small silver lining on that cloud, Younger Daughter is getting her very own trip with her dad. She gets to fly in an airplane and stay in a hotel and see her cousin, all of which has been making her very happy. She's had a huge growth and maturity spurt this summer, and it's amazing to see that she is most definitely a girl now, rather than a little girl. Watching her play soccer last weekend was great fun, as it's clear she's starting to participate in the game in different ways, and she's enjoying it more as a consequence. I know she's going to love having this time with her dad when he's not working, and she's not going to school or camp. This morning she was literally counting down the minutes until it was time to leave for the airport (which drove her father completely crazy). I think this'll be a nice end to her summer, which comes to a crashing halt Monday morning when she goes back to school.

I don't have much else to report. I haven't been spinning, although I've been looking longingly at both my roving and the yarn I finished just before starting the shawl; I need to starting scoping out some hat patterns for Rick, which is what it's destined to become. Work on the Kimono socks has also slowed down; the edging of Lacewing doesn't require the fierce concentration that the body did, so I can do it in bits and pieces in the time that I was using on the socks. However, with faculty and Senate meetings starting up next week, I'm guessing that I'll be putting in some time on the socks sooner rather than later. I'm starting to think again about what to knit next, and about the things that I have OTN already that I'd like to finish up. Of course, we all know that I'll only be a short way into something else before the lace bug bites again, but it's best to be prepared for that little window of opportunity. Tomorrow and Friday I'll be on campus, xeroxing syllabi and finding all of my readings for my classes, and then Saturday is Older Daughter's soccer game. Maybe Sunday will be a quiet day? One can only hope...
Posted by Knitting Linguist at 2:07 PM

The remaining amount of spaghetti looks a little bit worrying: I have all my fingers crossed for you, which is interfering just a little with my knitting...

It actually looks like a goodly amount of yarn there but you're the one knitting and therefore have a better idea, wishing you the best that it'll be enough! It's GORgeous!

It's just a little crazy this year, eh? Conor and Gracie's school started up on the 11th... so early!

I hope you get your quiet Sunday!

I'll keep my fingers crossed re the yarn, but I do know from personal experience that Ravelers can save one's bacon in the most extraordinary ways (that's how I met my pal Limonene, as she was just remarking today). I hope YD and Rick have a great trip. We are actually having some good weather on my part of the east coast -- seemingly the first of the summer.

Ah, settling into new school. I remember one year (8th grade) that I never settled into at all. The first day, I missed my stop on the bus on the way home. It got better.

Older Daughter is doing much better than I! And younger on her own trip - good to balance out the New Zealand trip and a better size for a younger kid.

I suppose you feel you need some drama to keep us entertained. Will the yarn make it!?! I'd settle for watching the finish happen and wondering just what your meeting knitting will be.

Looking good, but I'm going to hold my breath (okay, just a little) and think good thoughts on the amount of yarn you've got!
(((hugs)))

Chewy Spaghetti? I didn't know you could eat and knit at the same time!

Yes, I know that's about as likely as the longed for quiet day.

I can see the lacewings from here - the internet has made my long-distance vision much better!

Crossing fingers for you on Lacewing's yarn.

How nice for Youngest Daughter to get her own Airplane Trip w/Dad! That's going to be very special for both of them.

My fingers are crossed. I so hope you make it to the end! Luckily it doesn't look like a long row of bind off?

I'm glad older daughter is having a better time at school this week and thats she's making some friends. Yeah! for younger daughter getting to go on her own trip. All alone with Dad.

I can't believe how fast Lacewing is going! (Of course, things always go faster when you're not the one knitting them, I suppose...) I can't wait to see it blocking; I'm also in love with the Faroese shaping. I'm glad it's going well!

It's coming along beautifully! I'm crossing my fingers and hoping hard re the skein amount. Sounds like the kids are having a good time, meantime.

hoo-boy-howdy . . i know how you feel; i would have run out of yarn too but i found a skein at the LYS in the nick of time. fingers crossed!

The lacewing is truly lovely and I'm in the bunch with our fingers crossed. Do you have any sense for how much yarn the first half of the edge consumed?

And what a great opportunity for your husband and younger daughter to share time together...and for you and older daughter to do the same! I'm glad she's settling in to the new year at school.

I'm glad OD is doing well and YD has such a special end to her summer. Did she get a thrill at the U.S. women's soccer gold?

As I read the post, I heard the concern about enough yarn, but it was totally put in context with your happiness about how your daughters are doing. I think you are keeping your eye properly on the doughnut (and not on the hole, as my husband likes to say).