Four and a half more edging repeats to go. Thirty-six more rows, 549 stitches.

Let me back up a bit. Before getting to that place of horror, I had worked my way through several obstacles. When I sat down to knit, I still had 31 more repeats of the edging motif to complete, and I figured I'd knit until about 10, and then knock off for bed. As I approached my self-imposed witching hour, I counted and realized that I had somewhere around 16 more repeats to go, and less and less yarn with every row, and decided that a) sleep is overrated, and b) I wasn't going to sleep anyway, what with wondering how the whole thing was going to end, and c) how long could it take to finish up those last repeats, anyway?

Note to self: sixteen repeats at about 122 stitches per repeat is not a trivial time commitment.

An hour and a half later, I had negotiated a new sleeping place for Older Daughter, who wanted to sleep with me while Rick and Younger Daughter are out of town, retrieved her and put her back in bed when she went sleep-walking, untangled a nasty knot in my yarn to the tune of 20 minutes, and dealt with a break in the yarn. I had also completed eleven and a half repeats, and had a mere four and a half to go.

And then I ran out of yarn.

I could see it coming. By the time I got to the fifth to the last repeat, it was clear that I wasn't going to make it. There was a certain sick fascination in the whole thing, though, so I kept knitting. All the while, I was madly making plans to snip bits off of the cast on tail (all of four inches) and the tail left at the other end of the edging (about six inches), and to try pretty much any desperate tactic to see the thing through. I'd entirely given up on achieving any kind of reasonable bedtime, and was starting to calculate just how little sleep might still count as "enough".

And then a little voice in my head shouted what you're probably all already thinking:
"The swatch, dummy. Cannibalize the swatch."

And so I did. Here's how much I had left when I finished. 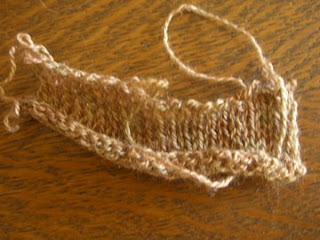 But I made it. By midnight, no less.

This morning, as I soaked the shawl, I realized that I don't have the right blocking equipment for a faroese shawl. Straight blocking wires I have in abundance. Not so much with the ones that bend. But when I started to spread the shawl out on the bed, I realized that as fine as this yarn is, I didn't want to stretch it as thoroughly as I might otherwise. Look, ma, no wires! 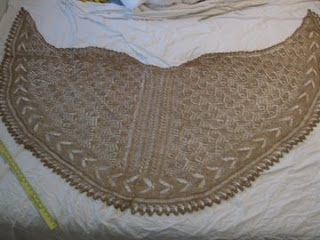 (That's a yardstick, btw, just so you get a sense of how big this is.) The arc isn't as smooth as it would have been with pins and wires, but I am satisfied. 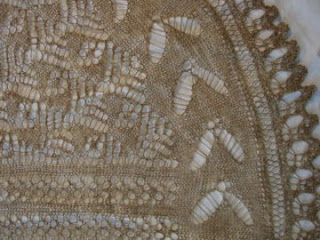 Doesn't it almost look like an old Roman coin? There's something about the lacewings in that giant half-circle, coupled with the edging, that brings old coins to mind. And of course, my very favorite part of any lace piece... 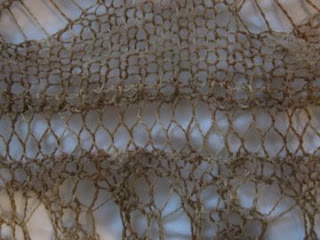 The bit between the edge and the body.

I am in love with this shawl. As big as it is (and believe me, it is big), it is light as air, and moves in any breeze. The whole thing is a mere four ounces, but it is very warm. 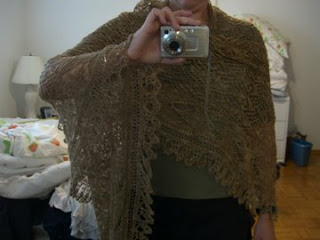 (Please ignore the sheets I stripped off the guest room bed in order to block the shawl.) 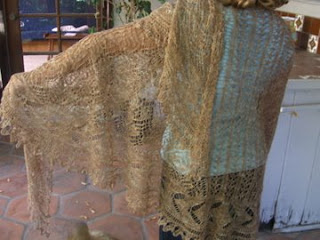 Older Daughter modeled it for me. As did my desk. 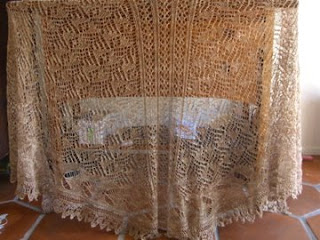 I don't know about you all, but I am pleased as punch with the way this turned out. I am so glad I went with this yarn; it was perfect for this pattern, and the shape of this shawl. I think I'm a little bit in shock that it's finished. I wasn't expecting it to be done until Sunday, and I think my brain isn't quite in gear about it yet, because I know that I'm not conveying my mad deep love for this shawl at all.

To recap: This is Anne's new faroese shawl Lacewing; she's also doing a rectangle version of the shawl. I do believe that she's released the pattern as of today. Hang on... Yup. Go check it out right now. Hers is absolutely stunning, and her photography, as always, is far superior to mine. I knitted mine in Chewy Spaghetti Capellini in the colorway Honest; it's a handpainted merino/silk blend, 4 oz/1260 yards. It's lighter weight than the yarn that Anne used, so you can see how it would look in something closer to a fingering weight if you check hers out. I used size six and size four circular needles. The pattern was amazingly clear, especially given all the shaping and charts involved, and I enjoyed knitting it so much that I'm almost sorry it's done. I say almost because come on, look at that shawl. Who wouldn't want that FO hanging around their house? I'm considering bringing it to Older Daughter's soccer game tomorrow just so that I can pet it. Would it be weird to sleep with it?

But now what do I knit?
Posted by Knitting Linguist at 4:24 PM

What a beautiful shawl! It always fascinates me the mental gymnastics involved when you're racing against a rapidly vanishing ball of yarn. Somehow it always seems like if you just stitch faster you'll make it, but we all know that's not logical! I'm so glad you remembered the swatch and were able to finish this - it's stunning!

Gorgeous. But don't give me a heart attack like that. Glad you had enough yarn. That thing is breathtaking. WOW!!!!

How do you top something that spectacular:)Hugs Darcy

It is wonderful. And yes, Ann's photos are better, but I have to say I really love the shawl more in the lighter weight yarn. So I will drool while looking at either post.

I love the lacewings, but I am entranced by the body pattern. It has so much motion in it. I wish I could see it when a breeze hits it, and it really is moving. Wonderful job!

(And you had my heart in my throat with the story of running short on yarn. You tease, you!)

Marvelous! As in, deserving of being marveled about. I've been thinking about my next lace project and believe you may have sold me on faroese!

oh yes sleep with it!! hee-hee! you won't even have to look rick in the eye afterwards . . .

i like the reference to the coin . . i hadn't seen that before in it but now i do!

btw, i use my straight blocking wires on circular shawls . . they are very flexible and it doesn't seem to harm them permanently. that said i keep asking david to go tot he welding shop to buy me some finer ones.

Ack.. I was holding my breath! Yes, the swatch! You're fast on your feet, or fingers?
Beautiful, stunningly beautiful!

Makes staying up late totally worth it.

Quite an accomplishment. Really gorgeous. If you to test knit a tweaked version of my lace baby cardigan, I just got it back from the tech editor...

Okay, now that I've recovered from the adrenaline rush i experienced after reading the first few lines of the post --Lacewing is absolutely spectacular and I don't blame you at all for wanting to sleep with it.

I can't believe how close you cut that!

The shawl is simply stunning!

Yeah, so -- what next? That's the true knitter's question.

It's lovely. I see what you mean about the coin thing, like a laurel-leaf wreath around the edge.

Gorgeous. Can't wait to see it in person....

Can you please tell me where do you have 122 stitches in the edging repeat? when I read this I thought to myself, she is going to say she knitted something extra,,, oy oy oy,,,, :)

With that accomplishment under your belt, school will be a breeze this week :-)

Have a good week.
Sarah

You had me worried there! Thank goodness for generously sized swatches!

The shawl is beautiful. I love the color. I wasn't head-over-heels about the pattern before, but I really like it in this color and the lighter weight. Oh, temptation...

As for blocking, I don't own blocking wires, but I find that a few circular needles make a great substitute.

Faroese! Go get Myrna's book...Any of them make a wonderful next knit!

THIS IS GORGEOUS..and you are so good a writer, I was on the edge of my seat (again!) wondering "will she do it, what will she do???"

Just breathtakingly lovely...now go buy some flexible blocking wires for the next one!
(((((hugs)))))

Heartstopping drama! Beautiful shawl. Spectacular. Definitely sleep with it. You can always read in bed with it around your shoulders and 'forget' to take it off as you fall asleep.

And what's up with the kid sleeping thing? Some nights I just give up, because it's easier in the short term.

another close save! i just hate when the yarn's running out and i think somehow if i knit faster it will help, except it doesn't. beautiful work! i like the roman coin comparison, the color adds to the likeness.

WOW - that's absolutely amazing, and HUGE! Beautifully done and well worth the extra couple of hours of nail biting!
Oh - and by the way, did you sleep with it in the end. :)