That's what I've spent the last little while doing: dithering about the edge for The Sweater. In fact, I was dithering so hard that I started a new pair of socks for Rick (admittedly, that needed to be done in any case, but I cast on before my new needles came, even). I also took the time to lay in some good books from Audible while I was dithering (and, btw, for any other Audible users out there, they are having an amazing sale on a huge list of books that are the first in a series -- to suck people in, obviously; at $4.95 a book for books like Master and Commander and Outlander, it's a deal on wheels). My theory is that this sweater is going to involve a whole lot of stockinette, so I'd better be prepared.

I started the swatch with the T twist that I am planning to use around the neckline, and then knitted for a while in stockinette on size six needles (this was on Monday when I took the girls to see The Tale of Despereaux, which we all loved). 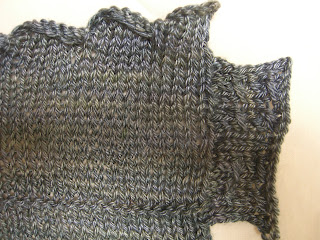 That's the twist on the top. See why I had trouble describing it?

When I got home, I decided that I also wanted to see what the fabric looked like on size five needles, so I knitted a garter row and switched over. Better. 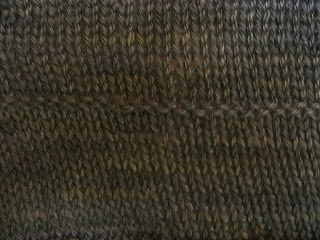 (Size six on top, size five on the bottom.)

After fiddling a while with that, I knitted on the lace border that I thought I wanted. Meh. 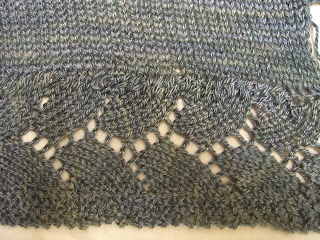 Don't get me wrong, I actually love the way that lace works in this yarn, but not around my waist. It turned out to be a wider border than I'd visualized, and more fussy. I want this to be a workhorse sweater, in an understatedly beautiful way, and something that lacy around the hem wasn't going to do it. So I picked up some stitches along the side of the swatch and tried Plan B. 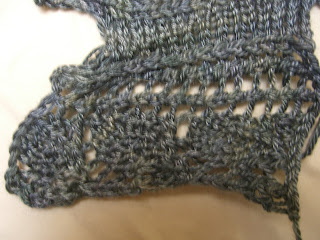 Really meh. (I should state for the record that I did wash and pin this swatch out to block, and it was lovely and even and straight. However, when I woke up Tuesday morning and went to fetch it, I found that some creature had lain on it in the night, knocking all of the t-pins flat, and causing the swatch to dry somewhat askew. Sigh...)

So I headed back to Nicky Epstein's Knitting on the Edge, where I'd found those two borders, and looked some more (I'd already searched every BW I own with no luck). That's when I found the border that you can see on the top photo above on the right side. I knitted that on, and then blocked it and went to bed. It ended up looking like quite the swatch blob. Doesn't it resemble like one of those bog bodies that got squashed all flat and crooked? If I ever figure out which one of them slept on it all night... 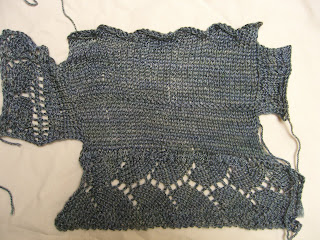 The next morning, I dithered back and forth between the first lace border (in spite of my reservations) and the last border (which is called a granite rib). While dithering, I took notes and did math. Lots and lots of math. And I took notes. I spent an hour trying to understand the geometry of a set-in sleeve. I made diagrams. I did more math. (I know, it's pitiful, but seriously, once I really get something, I've got it, so it's worth the upfront work.) 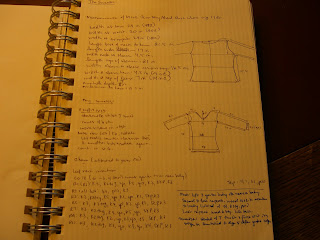 And I drew some more. 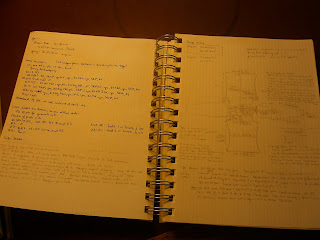 Nope, I can't draw worth a darn. Why do you ask?

Then the time came to cast on. I almost went with a sleeve first, except that there is still a small part of me that is considering knitting the sleeves from the top down (even though that'll mean grafting on that t-twist border), because somehow the sleeve cap seems more intuitive to me that way, but starting with the body of the sweater meant making a decision about the border. If I decided on the granite rib, I could just knit that first, but if I wanted to do that lace border after all, I'd need to do a provisional cast on so I could knit it on later.

I went with the rib. I think it has a more subtle look, and its texture looks to me like sand after a wave has passed. It made me happiest. (Do you love that stitch marker, btw? Anne sent them to me last year from Entrelac. I love them so much that I recently got myself some of Entrelac's omega markers.) 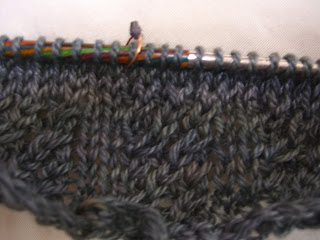 I completed two and a half repeats and decided that I liked the way it looked, and headed into the stockinette body. Now I have to check again to be sure that my maths for the waist shaping are right. But I've got at least another inch before I need to start really worrying about it, so I can take a break from dithering for a little while. Does anyone know about the right number of inches to work waist shaping over? I don't know that I'm ready to haul out the sweater books again...
Posted by Knitting Linguist at 10:09 AM

I do like your dithering. The twist border is lovely. Hope you decide on the lace

The number of inches your waist is. Do you want it fitted? Tight? Loose? Sorry to let you know, you need to do more maths. :)

Ah, so that's the twisted thingie! It's pretty, the sweater is going to be really cute. Eventually. When you finish designing it. As you go. (my favorite method).

I like your design process, good luck with The Sweater :)

I love the twist, too.

I think you meant, how many vertical inches to work waist shaping? Generally speaking, about 5 or 6, if one is of average height.

I am truly delighted in your diligence.

Ah, the design process. I love it. I love that twist edge too. I used it on a T-shirt a couple of years ago - you can see it on my rav pages. It was fun and worked well.

Set in sleeves can be a real bear. I prefer doing them top down for sure. T-Twist looks good and I love the yarn.

I admire you doing the maths. If I had done enough maths I wouldn't be in the pickle I'm in right now, of which I will no longer speak, I'm so disgusted with IT and myself.

Love the rib ... (love Outlander, too) but in a rare break with you I have to say that I did not love the movie adaptation of Despereaux. Something about the way the princess was animated gave me the willies. I love the story, though!

I'd measure the height/length between your waist and wherever you want the shaping to start. More figuring!

Dithering? Looks like a design process to me. I'm having fun watching you do it! (and taking a break from mine)

It's fascinating to watch someone else's mind work.

My own notes aren't half so neat and they are on tag-ends of paper, the backs of grocery receipts and things.

Your dithering looks wonderful. A lot of work is going into this sweater I hop that you'll get more then one out of the research! Sadly I can't help at all because I've only knit one sweater. It alpaca and pills like crazy so I don't wear it so much even since there isn't much call for a sweater that warm here.

Oh and I love the twisted edging. Forgot that part.

You've been doing some productive dithering! I like the twist edge a lot, and the original lace border. I wasn't sure about the granite rib in the swatch, but I really like it in your cast-on piece. Looks like you're off to a good start!

I usually work waist shaping over 5 or 6 inches, which is actually pretty crowded for decreases, depending on how well-fitted you want the waist to be.

Wow. Just. Wow. As a non-sweater knitter, you've just intimidated me to no end...but your dithering and calculating and drawing out in a little book method appeals to my deep-seated AR-Accountant-mind...
I like the twist, too.
:)
(((hugs)))

Okay. . . . so remember when we were discussing where we'd knit in public at lunch last week?? So you knit in the movies??? Do you have probs when it's do dark or was Desperaux just brighter than bright?? do tell your secrets. Sam has infra red goggles; maybe I should just wear those to the movies . . . .but the ppl behind me might not like it cuz they're like a helmet. . . .

I'm going to love following the progress of this sweater as I'm in the midst of my own design effort. I am most envious of your organization -- I did equally as much sketching and swatching, but mine is on bits of notepaper. I really need to use a notebook like you. And I think you made the right choice on the rib!

Thanks for your comments on twinset!

I'm working my way backwards - to catch up on the blogsphere ... and i love your workbook. I do that to, draw and measure and maths, and its so nice to see the process is universal. and the repaired side shaping - I love it, I love the idea of the sides worked on smaller needes, can't see why it wouldn't work. In fact - I'd love to see a sweater with a section worked in a smaller guage - just to explore the notion.
S