That's almost where I have knitted to on The Sweater over the last several days. I am about a half an inch away from dividing my knitting for the front and back. Then I have armhole shaping to negotiate, plus the simultaneous v-neck shaping when I knit the two front halves. After that, though, I think things should be fairly smooth sailing. I'll just need to pick up stitches for the sleeves, use short rows to shape the sleeve caps, and then calculate a nice even rate of decrease for the sleeves (actually, I may have already done that; must go check notes).

[Imagine a picture of a sweater blob here. I have just discovered that the camera and iPhoto are once again refusing to talk to one another. Grr...]

The waist shaping turned out to be more dramatic than I'd thought it would be; in order to fit the shaping I wanted into the space that I had, I needed to increase and decrease on every other row, which is pretty serious shaping. I have some concerns, but when I put it onto two circs and "tried it on", it seemed to be the right amount in the right place. I put "tried it on" in scare quotes, because seriously? Holding a 10-inch wide ring of knitting around one's middle doesn't really show one how it will look when it's hanging from one's shoulders. So, I'm forging ahead, and as soon as I get the shoulders together, I'll try it on again. If I need to, I'll even block it first, and then try it on. If worse comes to worst, I'll rip (which may mean that I don't actually bind the shoulders off together, but just pin them together instead until I'm sure that I'm OK with the way things look).

It's been a busy several days around here. An old friend and colleague of mine came to stay for a couple of days so that we could get some work done on a project we have in the works. It was a very productive two days, which felt good. And it's been raining off and on, which made it easier to stay indoors and get work done, as well as making me finally feel less dehydrated and dried out. Of course, that may also be driving this sweater monogamy; it would be nice to finish it while there's still a chance of having a little winter left so that I could wear it. I have been so monogamous, in fact, that I've gotten nothing done on Rick's socks, in spite of the exciting arrival of some new knitting needles (more on those when I can actually provide photographic evidence). I think, too, that I have been rather enjoying the relative mindlessness of this knit. It's just round and round and round in stockinette, which requires no concentration at all, and since the yarn is fairly light, it's not a burden on my wrists.

I had also planned to show you the lovely photo that my friend took of Older Daughter proudly making and flipping her first Mickey Mouse pancakes, but you know where that photo is. (Some days, technology just doesn't seem worth it.)

Today looks to be a gray day, and since Older Daughter is working madly on her history day project display, I think it will be a quiet one. With luck, that means I'll get at least the back part of the sweater done. We'll see...

This just in: It turns out that the issue with the photos was not one of argument between camera and computer, but rather something very wrong with the camera itself. Pictures were coming up overlaid in green, and fragmented, and in generally in a terrible state. We've wiped the disk, and are hoping for better performance. Rick did, however, manage to retrieve the shot of Older Daughter joyously flipping pancakes, which I include here for your amusement. 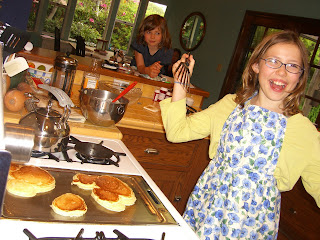 Posted by Knitting Linguist at 10:05 AM

Thank you for your felicitous encouragement about my maths. I finished my sweater, am wearing it as I type, but it's NOT THE SWEATER. Too many mistakes.

The rain has been nice, but I'm glad the sun is back today.

Ah. iphoto and the camera. We had troubles, too, after Sweetie got all the latest 'puter updates. The two things did not know each other at all.

Sweetie finally found a workaround, which was to set the camera to Favorites before trying to download. (Or maybe it was scenic. Can't remember at the moment.)

Anyhoo, after that one download success, everything was back to normal and the camera setting seemed to matter not.

Sounds like you have made good progress. Best memory I have of pancake flipping is one of my best friend who tossed it and it stuck to the stipling on the ceiling. Took ages to get down as we were crying with laughter.

Yep, she sure looks happy!

I have great memories of being allowed, as a kid, to make pancake scribbles with the last of the batter.

Great shot of pancake happiness. I bet you will have a similar expression when you try on The Sweater once you get to the shoulder seams and it fits perfectly.

Sounds like you're buzzing along! Won't be long now until you have a new favorite sweater. =)

Waist shaping always feels drastic to me. It also manages to work out almost every time, somehow. Can't wait to see the finished piece!

Looks like you have an expert Mickey-Mouse pancake maker...congratulations to Older Daughter!

Looking forward to seeing the sweater blob. i spent much of saturday fighting with some computer issues. How can I loose 4 months of quicken data? The pancake happiness is great to see!

Beautiful sweater photos! (I have a pretty good imagination when I need to, and sometimes when I don't)

Too bad I read out of order, and I know what happens next....

I always knew my nieces where incredibly talented....(I guess that is what happens when they have amazing uncles...I mean parents... yeah parents... lol lol)

I feel way behind on the sweater comments, but I have to say I love this photo of your daughter. It makes cooking pancakes look like a LOT more fun then it is :)

Those pancakes look so good! What a cute photo!