That's what I've been doing this weekend on the shawl, just rolling along. It feels like I'm on the downhill part of the ride now; all the hard work done, and smooth sailing ahead. The rows keep getting shorter and shorter and faster and faster. I think rows are taking less than 15 minutes each now (instead of the 30 minutes/row at the beginning); and since there are three repeats of the section I'm on now, it feels familiar and easy. I'm halfway through the third repeat, then it's just the shoulder shaping and neck edging and I'm done. I'm keeping my fingers crossed that it'll happen by the middle of the week, but we'll see. It feels like it's been ages since I've blocked lace, and we all know how much fun that particular form of alchemy is. (And, come to think of it, it has been ages; I don't think I've done any big lace blocking since Lacewing.)

I also got quite a bit of knitting done on Younger Daughter's second sock yesterday, as we went to see the play Shipwrecked! at the North Coast Repertory Theater yesterday, and darkened theaters and lace don't mix. We weren't sure we'd make it until the last minute, since Younger Daughter developed a hideous stomach flu on Friday night (trust me, you don't want the details; heck, I didn't want the details, but I'm her mother), but she was keeping food down and had slept a ton and was dying to go, so we took a chance, and it worked out beautifully. Both of the girls loved the play (they were enthralled, in fact; it was almost as much fun to watch them watching the play as it was to see the play itself), so I'm glad we took the chance.

I've also spent some time this weekend playing with this beauty. 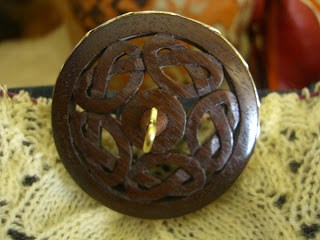 This is my replacement Golding spindle. 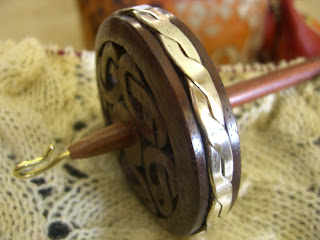 I think I mentioned a few weeks ago that we'd had a tragic accident chez Knitting Linguist, in which I dropped my drop spindle (this happens, as the name suggests) on a rug, and the carved wood part of the whorl shattered. I was devastated, Rick was devastated, there was a general devastation fest around here. He wrote to Tom Golding who told him to send it back and promptly shipped me this lovely replacement. Talk about stellar customer service; they were amazing, and so very nice about the whole thing. It spins just as beautifully as the old one (I do so very much love this spindle), and I'm spinning over a thicker carpet these days, so it's all good. This evening I was working on the merino/silk blend top I got the other week at Twist!, and it's absolutely stunning. For some reason, I've been working with my two spindles more than my wheels lately (the Turkish spindle still has my lovely Bunny and the Beast on it; I'm working through that batt little by little); I'm not sure if it feeds some need to slow down a little, or to worry less about production and more about process, I just know that it works.

As I've been talking lately about the knitting and fiber-related books that I've been acquiring, I have to share my latest, entirely unprovoked, acquisition. Each week during Younger Daughter's Irish dance lessons, I get to spend time with a friend of mine whose son is taking lessons with Younger Daughter. We both knit and hang out and talk about books, which is a very nice 45-minute interlude in my week. A couple of weeks ago, my friend mentioned that a friend of hers had given her a knitting book years ago that she didn't use and probably wouldn't ever knit from, and said that she'd bring it to me. Of course, a new book is always an exciting prospect, but I was completely gobsmacked when, last week, she produced this from her knitting bag. 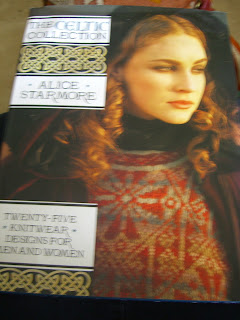 (Can you tell from the blurry photo how excited I was? Photographic evidence notwithstanding, it's in fabulous shape, virtually brand new.) I mean, seriously. Can I just tell you how much I've wanted this book? I took it out from the library a while ago, and drooled over it until the library made me give it back (I wiped it down first, for anyone else who's checked it out since then from the San Diego County library). I have been thinking of getting a copy, but haven't quite made the commitment, and now I don't have to. How cool is that?
Posted by Knitting Linguist at 8:16 PM

That book is wonderful! I bought a copy from the remainder table at a downtown bookstore in Minneapolis 5 or 10 years ago. I may never knit anything from it, either, but just looking at it is awe-inspiring.

That spindle is a work of art in itself, it's beautiful

Let's see . . . which do I envy the most -- the Golding spindle or the Starmore book? Hmmm, since I have some nice spindles (although not so nice as that gorgeous Golding), I guess it would be the Starmore book. Seriously, what a delightful way to acquire that fabulous book!

***gasp****
Getting gifted That Book!!!!!
Seriously, how absolutely amazing is that?!?!?!? wow. WoW!
I have personal feelings about those Starmore women not reprinting their books. What's with that?

You have nice people in your life to give you neat books. I was looking at that and wondering if it was as nice as it looked.

I am starting to move, so I am having to reevaluate all my possessions. None of the knitting books are going away :-)

That is very cool. That was one of my first Starmore books, although I haven't knit anything from it either, come to think of it.

That spindle is fabulous looking! Oh, I have to get going on spinning so I can justify getting such a pretty spindle.

Hope Younger Daughter continues to feel much better! Poor baby. (and poor you too. Urgh.)

What a great fiber weekend you had! Knitting, spindling, reading a fabulous book!

I'm so glad that they replaced the Golding! The new one is beautiful. I haven't really gotten into spindles (I know...it's a little odd, as I'm into everything else...), but they are beautiful.

And the Starmore book is a great surprise! I love her designs. Did you hear that they're re-printing one of the books this summer? So excited!

Glad YD is feeling better and that the trip to the play went well.

Good news about the replacement spindle and wow! Alice Starmore - you sure have a had a good few days!

oh that is a wonderful book; i can't think of a better person to have inherited it! the discussions about color and history in AS's early books are truly inspirational (fair isle knitting is another great book of hers that just came back into print)

Marianne, my understanding is that they don't own the rights in the books, and thus can't reprint them. Usually when you publish something you have written you pass the rights to make copies over to the publisher. But I may be completely wrong about that. However, that particular one isn't very expensive - if you google you'll find it for less than $20US.

Lovely gift, in any case.

Oh, I'm so glad Golding came through! And what a nice thing for a friend to do. (I keep hoping for a copy of Susanna Lewis's book to show up at a garage sale someday - well, a person's gotta dream!)

This is one of my biggest worries about drop spindles. We don't have carpets. We have wood or stone or tile. I can't imagine dropping something. I'll stick to the wheel.

That's amazing to be given the Alice Starmore book. Enjoy!