It's been how long?!

Wow, those two weeks went fast. I suppose that's a sign of just how much fun we had. This is also post three hundred, and I can't believe how fast that went, either. It feels like I should do something special to celebrate, but if I wait to post until I think of something, I'll never get started, and there's a lot to tell (and show). In fact, there's so much that I'll break it up into a series of posts. Two weeks of travel can generate a lot of photographs, especially since we took along Rick's new camera and had a lot of fun with it. I have a whole series of doorway/window photos, not to mention what I think of as lacework photos (the stonework in some of the buildings we saw was fabulous). I'll share those separately.

We flew into Edinburgh, and arrived in time to take a nice long walk around the city before finding somewhere for dinner. As hard as jet-lag can be for me when travelling east (I always do better going west), that kind of arrival timing works out well, since all we had to do was keep moving until it was time to go to bed. Even the girls managed to stay awake and cheerful (I was impressed). Rick dove straight in and had haggis for dinner. I had a nice Strongbow from the tap. 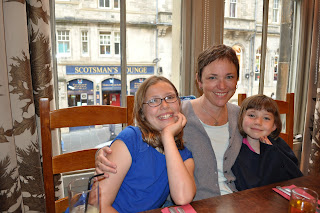 I won't do a day-by-day description, but whilst in Edinburgh, we went on a tour of Mary King's Close (absolutely fabulous, although no pictures, since it was really dark down there under the city)(the ghost bit sort of freaked Older Daughter out for a night, but she recovered), saw Greyfriar's Bobby, 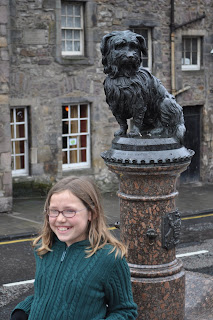 and lots of fabulous architectural details. 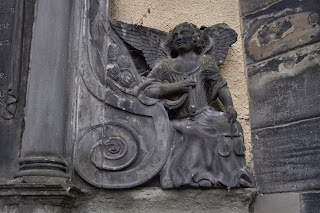 (I love the eye in the middle of that swirl; see it?) 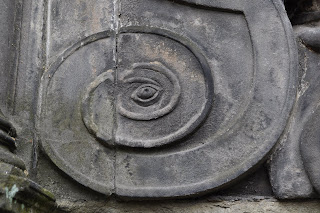 We also went to Edinburgh Castle. The girls' one request prior to the trip was to see castles (California having a dearth of real castles), and we attempted to meet that demand right away. The view of the city was gorgeous, grey weather notwithstanding (I love grey weather). (Rick was getting artsy here.) 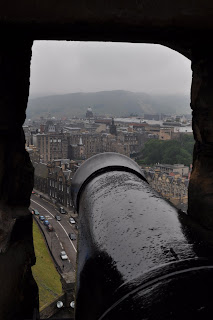 My stay in Edinburgh was capped off by an absolutely delightful visit with Helen, who has spent the last several months sending all sorts of fabulous recommendations for places for us to visit during our trip. It always feels a bit odd to meet someone in person with whom one has a correspondence, I don't know why, but this turned out to be like meeting an old friend. We settled down for coffee and talked and talked until Rick came and found me and reminded me that it was time to rejoin the family; I only wished we could have visited longer! Helen also presented me with some gorgeous Scottish yarn, which I can't wait to knit up. I may make this my Sock Summit knitting, so I can show it off. 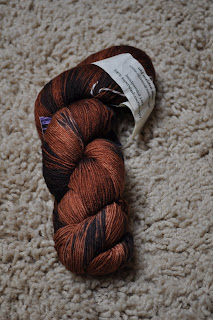 Old Maiden Aunt, and isn't it gorgeous? It's like chocolate and coffee, mmm... Rick already has his eye on it for socks for himself; I may oblige him, we'll see.

The next day we left Edinburgh, too soon; I loved that city and will definitely go back someday, there was so much more to see than we managed. Of course, we didn't leave without trouble. We'd reserved (and paid for) a rental car which was (according to the rental car company) supposed to be able to seat seven plus five pieces of large luggage, five pieces of small luggage and two golf bags. We figured, therefore, that we'd be able to fit six people and their concomitant gear (we pack light). The car we got, though, was a glorified station wagon. It was a Vauxhall Zafira, which can either be a station wagon, with plenty of trunk space and room to seat five, or one can pull two extra seats out of the trunk space, thus having room to seat seven, plus room for two small backpacks in the trunk. No joke. The rental car folks told us that it was the largest car they rented and what we'd agreed to (we later found out that, in fact, that wasn't the case at all, and that they'd screwed up badly and didn't want to admit it; we paid for a far larger car than we got, but we're working on that now). It could have been tragic, but we squeezed everyone in, luggage on laps and under feet, and went to a local sporting-goods store, where we bought a box for the roof rack, Rick installed it, and we were on our way in a matter of hours. We weren't going to let anything stop us. (We later found out that since the rental company made such a big mistake -- and since we left them with the roof box, because there was no realistic way to get it on the plane -- we should be fully reimbursed.) So we were off to Stirling Castle en route to Inverness.

We all agreed that it was a proper castle with a nice imposing entrance. 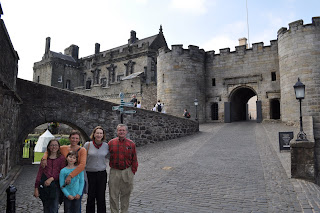 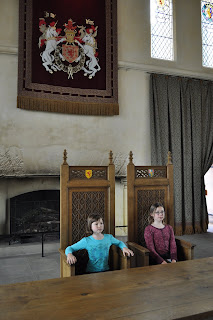 They're being "prim and proper" there. (It didn't last long.)

Rick wanted to know why we couldn't have a roof like this in our house. (Look, ma, no nails! It's a hammerbeam roof, made with no nails; this is a restoration, but is based on the way the original would have been constructed.) 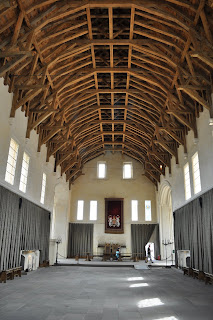 I told him it's because we're not royalty.

I think I'll leave off here, with us on our way to Inverness and from there to Orkney. In the interests of keeping some knitting in what is ostensibly a knitting blog, I'll end each of these posts with some knitting. I worked on this while travelling and just finished it yesterday. 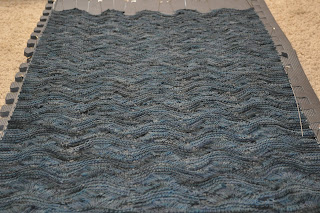 That's Hillflowers, which I knit as a sample for the Knitspot/Briar Rose booth, out of Briar Rose Harmony. Aren't those colors gorgeous? 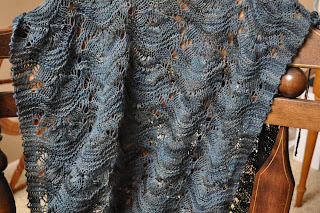 This pattern really shows off the colors in a hand-dyed yarn. I'll definitely be knitting one for myself sometime sooner rather than later.

OK, more soon, but meanwhile, it's good to be back.
Posted by Knitting Linguist at 8:45 AM

Looks like you had a fun trip. Welcome Back.

oh I am SOOOOOO jealous!!!! Dave and I are both of Scottish decent (Im a Campbell, he's a Stewart) and are dying to go. As we hash out wedding plans (which are still incredibly up in the air) the idea of running away and doing it in Scotland has come up more than once (I really like the idea of Gretna Green)

Welcome back! One of these days I will make it to Scotland. Looks wonderful.

Looks like the best of trips. You all look so happy in the photos!

I especially like how younger daughter sits on the crown chair :)

Oh and the new camera does a real good job!

OMG - WHAT A great first set in the series of vacay photos - I'm just green with envy. Hillflowers is lovely!
I missed you. Missed our emails most. And soon twill be Sock Summit!

The knitting is lovely. Looks like you had a wonderful time. As a child, I had lots of holidays around Edinburgh, I'd love to take the boys up there. Look forward to seeing some more photos

Oh, welcome back! I saw your comment on my blog and came over directly. I love love your photos of Edinburgh. The artsy photo at the castle was wonderful.

Hillflowers is also wonderful. How many yards of yarn? I have some handspun (the blue stuff in my Out of Fiber post) I could use...

I'm jealous of your girls...my parents went to Edinburgh for a conference when I was 10, but my brother and I got left behind in the States with my parents, so all I've ever seen are the pictures.

Color me jealous too! That castle looks fabulous and I think the ceiling would work well in your current home (without, naturally, ever seeing your house). Helen sounds like fun, the car sounds like an....um, adventure and Hillflower is freaking gorgeous.

I think my favorite picture is of the girls being prim and proper - I can just feel the delight at being royal for a moment.

Welcome home! I am counting on seeing the Old Maid Aunt, the Hillflowers, and, of course, you at SS.

It seems like you enjoyed your trip to my home country. I am glad - I am always telling people how wonderful it is. I will look forward to the next installments.

This trip looks so fun! I love Scotland and I've only ever flown over it :) Eventually we'll land there I'm sure. Lovely yarn and you knitting is gorgeous.

ooh, wasn't mary king's close freaky? how weird to think that those homes are BELOW the city! That is the only place I've ever been that I would say I honestly believed there were ghosts or some sort of spirits nearby.

Love looking at your pics, brings back such memories!

WOW! Cool! I'm a quarter Scottish. But just don't show that one picture to the Southern Cal road-ragers: a cannon pointed at the other traffic! How would it be?

That roof reminds me, in a good way, of our barn roof. Awe-inspiring! Very good castles. And I think your daughters would make very good royalty. They make the thrones look good.

I'm sure you noticed Hillflowers went well with the grey skies and grey castles?

Welcome back! It sounds like a fabulous trip . . . I approve of all the castle visits. Illinois is also lacking in castles.

oooh, real castles! Michigan is another place that is short on castles. Although if you want some excess mosquitoes we could ship them by the boxcar load.

I've enjoyed discovering your blog earlier this spring, and missed you while you were gone. Welcome back to CA. Debbie (the account will say I'm Roger, because I haven't figured out how to log out of my son's account. Ah well.)