I realize that I really need to get a move on here with this story, or I won't be done telling it before it's time to leave on the next adventure (and yes, there is another one in between now and Sock Summit). I have also nearly finalized what I think is going to be the list of questions for the knitting questionnaire, and I'd thought to post them here first to see if you all think a) they make sense and b) they cover what needs to be covered, before getting them up onto SurveyMonkey. My big goal is to release the online survey to you guys, my trusted feedback-givers, before heading off to Sock Summit where I'll be soliciting further participants through the use of little fliers.

So, I believe I left you all in Inverness, where we stayed for mere hours before getting up (very) early one morning to catch a bus to Orkney. Which is very far north. Probably about as far north as I've ever been, barring Fairbanks, Alaska (which is just over 64 degrees, compared to Orkney's just over 59 degrees). (I pointed out to Older Daughter that she has now been further north and, after last summer's trip to NZ, further south, than most people ever go.) All of this northness meant, among other things, that at this time of year there was a lot of light on this trip. There were maybe about four hours of darkness at night, and that was all. Rick and I were regularly reading by the light from our hotel windows at 10:00 at night. And the kids kept protesting that it couldn't possibly be time to go to bed, as "Mama, it's still light out!"

So, off we went on a bus, and then a ferry, to Orkney. It was incredibly cold and grey, no views on the way over, and we were glad to be bundled. 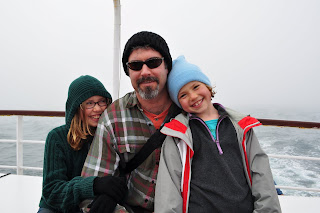 One of the goals of the particular trip we were on was to see some of the oldest ruins on Orkney, which dated back at least 5,000 years, so that's what we did. The sun even came out for us later, showing us just how gorgeous Orkney can be (look at the colors in that water! it rivalled anything we saw in the Caribbean). 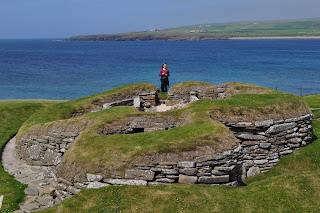 That there is a 5,000-year-old village that Older and Younger Daughters are standing on. It was built and then buried for insulation (using, archaeologists think, detritus taken from an earlier midden heap; very clever use of resources, and an indication of how much longer people had lived on the island even before this village). Each house was cleverly arranged inside, using flat slabs of stone for everything: bed boxes, storage containers, a shelving unit, everything. And there were underground tunnels running from house to house. All extremely clever, all perfectly suited to the environment, and all an excellent indication of just how cold and windy it must be there during much of the year, to make such housing necessary. 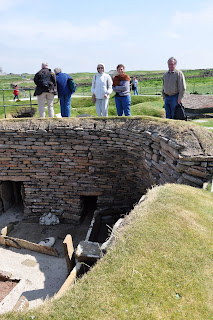 We all commented on the similarities to the dry-laid walls at Mesa Verde, and then kept being blown away by the fact that these were thousands of years older. Older Daughter couldn't get over the fact that she was standing where people had lived and gone about their business so long ago.

We also saw one of the stone circles on the island, quite a large one, and mostly intact. 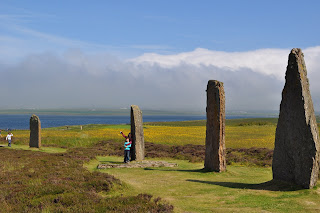 Our bus driver kept being cranky because people were late getting back on the bus, but honestly, 15 minutes is not enough time to really see something like this. 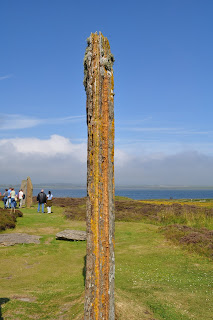 The sky was clearing, and the views were magnificent. 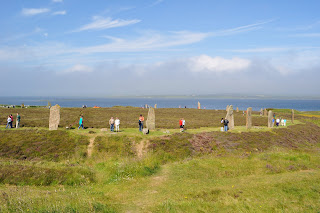 But we did eventually have to head home. Our second day in Inverness included some lovely hiking (although we forgot to bring bug spray, and had a serious run-in with blackflies, alas). I think the girls enjoyed the opportunity to run around and climb things for a while. 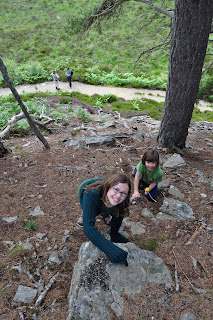 We also visited the Glen Ord distillery that afternoon, which had a fabulous tour, and a tasting room that was worth lingering in for a while.

Then we were off to Skye. The plan was to take a detour along the way at the Inverewe Gardens, which Helen had highly recommended, and I could see why. They're fabulous, and we were so glad we went, but I have no pictures, because it absolutely poured while we were there, and Rick was (understandably) unwilling to bring his new camera out in the rain. But we put on our rain gear (that's why we brought it, right?) and explored and all agreed that we were so glad we'd stopped.

Of course, everything couldn't be easy, right? As we continued on towards Skye, or beloved (ha) rental car got a flat, on a very tiny road with no cell phone reception. Luckily, Rick was willing and able to change the tire (of course, the rain chose that moment to recommence), but it certainly added to the day's journey! 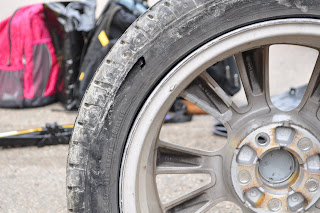 There was another slash just like it on the other side, too.

Whenever I wasn't driving, I worked away on a pair of socks for Younger Daughter; I made the cuff interesting and the rest plain stockinette, so I could knit while watching our progress (someone had to keep us on the road). I finished the first one on the trip, and am working on the second now, during the Tour de France, which is so exciting this year that I have to be able to watch the TV, and not my hands. 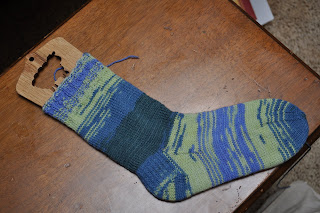 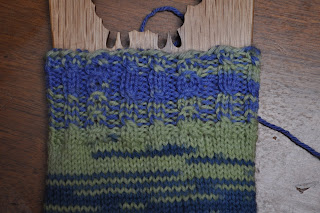 I'm knitting these out of Knit One Crochet Too Ty-Dy Socks yarn, in the Blueberry Fields colorway, on size one dpns. Younger Daughter is pretty excited about them, and I think they'll make good school socks.

Tomorrow: Skye, and a yarn adventure.
Posted by Knitting Linguist at 8:22 AM

I absolutely love the dye job on those socks! They will be a great memento of your trip.

Thanks for taking me to Scotland in surrogate.

Wow. Cool. I wanna go. (And I love that deep teal-green sweater and hat color!)

That's it! I'm moving to Scotland!
I love that sense of history, and knowing that you're standing where people have lived for centuries!

It all looks so lovely, it's a beautiful country

Even more fascinating than the castles, I think. The very, very old. Not geologically old, but old enough for my mind to boggle at. (My dad always takes photos of ancient drains and toilets and sewers when he has a chance.)

The tunnels between homes in the village remind me of our skyways in Minneapolis (also known as Habitrails, at least in our family). Same purpose, but I'm thinking the skyways won't be here as long as the village has lasted.

The socks really are swell. Great colors. They capture a bit of the colorway of that Orkney sea.

Lovely photos again and I really like your sock the cuff is very cool:)

Great socks! Lucky Younger Daughter! I think I remember that the Orkney people also used their subterranean abodes for security, ie., hiding. What a wonderful adventure!

Orkney, land of MacBeth, presumably. That must have been just magnificent.

The gardens too and even the rain. Wish you could've brought some of that back!

Can't wait to hear about Skye.

I feel the need to apologize for the rain at Inverewe, and the cranky bus driver. Sorry :(

It was the blue and turquoise seas around the Hebrides that started me knitting again many years ago; I had a holiday on South Uist and I was knocked out by the very horizontal horizons and thought, you could knit that. I'm glad you had such a good day on Orkney.

Orkney! Wow. I have to agree that 15 minutes is no time at all.

Beautiful photos! I really want to go there now. 15 minutes is TOTALLY not enough - I hate when tours rush you through such amazing things.

Thanks for sharing your adventure!

Scotland, England, and Wales (okay, Ireland, too) have been on my list forever. I really want to do a Goddess tour...
:)
I'm so enjoying your travelogue!
(((hugs)))

With Car Rental 8 you can discover the cheapest car hire at over 50,000 locations across the globe.