I've used this post title before, but clearly the brain cells marked "creative" are on holiday.

Actually, I'm on furlough today, which feels very strange, as I'm starting my classes tomorrow. But I needed to find two furlough days in August, and as I only reported back to work on August 24th, that didn't give me too many options. I don't much like this furlough thing, and it's not even really because of the pay cuts, but that's a rant for another day.

On the bright side, we had a very nice weekend, which I truly needed after a week of meetings that were all of the sort where there are lots of emotions and politics and undercurrents and stress floating about. I did get lots of knitting done on Rick's sock (more pictures of that next time), but sometimes even the knitting time isn't worth the angst (and that's saying something). So a calm weekend was very much in order. Saturday morning I got up and went for a swim with my friend who makes me get into cold water just by doing it with me. Then off we went to the girls soccer games, which were at the exact same time. So I took Younger Daughter and Rick took Older Daughter. The games weren't as successful as the first week's had been, and they both lost (playing in the midday heat probably didn't help, either). But since the point of rec soccer is to play as much as it is to win, that was all right.

We had a lazy afternoon, in which I appear to have cast on for a new sweater (oops). I'm still waiting for the new yarn for the Elektra sweater (very very long story), and as both that and the socks I'm knitting for Rick are fairly plain knitting (Elektra = garter stitch, Rick's socks = stockinette), it was time and past time to cast on for something with a bit more oomph. As luck would have it, a box arrived for me last week, from my dear friend Chris over at Briar Rose, containing the most gorgeous skeins of Charity you could ever hope to see, in a color that (as I'd hoped) remind me of the hills of California in the fall (the hills that aren't burning, that is). I didn't cast on during the week since I didn't think this would be meeting knitting, but I couldn't contain myself and I wound up both skeins into balls and got started. 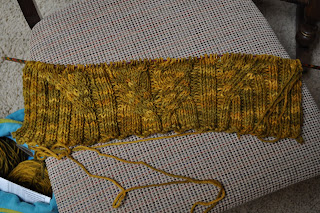 So squishy and lovely and rich. Anyone recognize that pattern? Here's another hint: 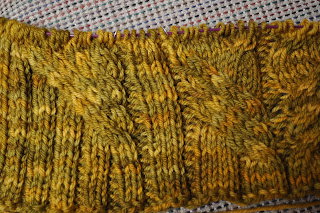 Chris had a sample of this hanging in her booth, and I oohed and aahed over it so much (I am nothing if not subtle) that she decided that I needed to knit one for my ownself. She's right. I'm going to wear this a TON. In fact, I was worrying that I'd finish it and have to stare at it for months, as we're entering into our hot season here in California (it was over 100 degrees all last week at work, and it's not going to get better for quite a while). But then the happy thought occurred to me that I get to go to Cincinnati in October (yay!), to see my fellow-knitter SIL and my BIL and my niece (hi, guys!), and it's gonna be cold enough there for sweaters, I think (am I right?). Yay! So that's a reason (as if I needed one) to get this knitted up.

I've also been spinning. I finished up the main part of the sock yarn I started at the Golden Gate Fiber Institute (meaning that I used up all the silk I had), and ended up with these beauties. 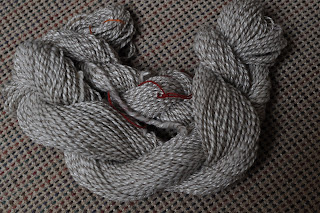 I think that's about 200 yards of three-ply yarn, at 16 wpi, which I believe falls solidly into the fingering-weight category. The plies are silk, silk/cashmere, and wool. You can see that the wool got puffier upon washing, which has made for a pretty effect, I think: 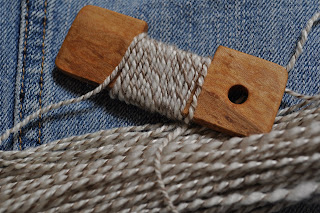 As that is not enough for a pair of socks, I'm spinning up the rest of the cashmere/silk and the wool to make a three-ply yarn for the heels and toes. I think I've got plenty to do that, and that should stretch the rest of this to a reasonable amount for socks. 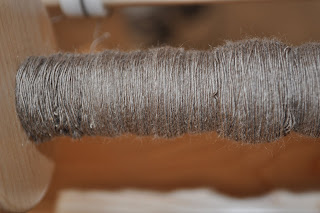 Little by little, I'm getting there.

And the last thing we did this weekend? 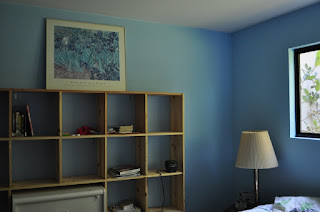 That's Older Daughter's room. Those walls were white yesterday morning. Now they're not. She picked out the color herself, and we got it all done yesterday. She's happy with it, we're happy with it, and I'm sure that my legs will stop hurting by tomorrow.
Posted by Knitting Linguist at 11:16 AM

I don't know the pattern, but that yummy Briar Rose sweater is going to be gorgeous!!!!!!

And the blue walls? Tranquility? That should be the name of that color. So pretty...

Your spinning is very pretty, but you know I don't know much about that!
Hang in there with the politics and I'll send along some
(((hugs)))

You have been busy, a good weekend's work. What a lovely pattern that is, it looks really interesting

I have no idea what the pattern is, but it looks lovely. BTW, I've sent the links to you and the survey to the Yarnery for their blog, Shelly said they'd be glad to do it.

That Briar Rose yarn is incredible. I even embiggened the pic in order to further admire the subtle color shadings. So . . . is Charity the name of the yarn type or the colorway? (I couldn't find it on the BR site.) And if that isn't the name of the colorway, then what is? I must have some!!! Don't care about the yarn weight, just the colors -- oh, those colors.

Heh -- my verification word is "crateop". Does that mean I should buy a crate of this yarn??

ooh! That blue is great! Maybe I* need to repaint somewhere...

*somebody else, maybe my husband. Or Mom! She's visiting!

You do need that extra saturday in there too! I knew it. If only I could figure out how to hit reset, program in that extra day and maybe nobody would notice, you think?

You know it was 80 here in Cincinnati last Halloween. But don't give up hope , its been a unusually cool summer this year so you might be in luck!

Your spinning looks wonderful, wish I could feel it. BIL just said that I don't need another hobby. Don't know what he is talking about.

So sorry work remains stressful. It does seem to bring out the best in your knitting and spinning, though - that stuff is gorgeous!

And I laughed in recognition at your comment on aching legs. Isn't it amazing how your legs ache after painting a room, much more than your arms which actually did the painting? But your heart must feel good, making your daughter happy like that.

That yellowish yarn is gorgeous. The weather has cooled down a lot here... especially at night.. I really have to get my cardi done

I think I'm falling in love with that pattern! More details please!

Love those blue walls. My kind of room :)

oooh, looks like your new sweater is going to match the aztec mazes!

Gorgeous spinning--nothing in the world like a good handspun.

I don't know what pattern that is either but I love the yarn and the cables. It does look like the CA hills.

Are you legs recovered? Painting really takes it out of you. I love the blue walls.

Should I feel badly about envying you your furlough days? If not the pay cut.

f it is too warm for your sweater in Cincinnati, please come on along to Boston.

I hope the politics get under control soon. And the spinning and sweater are gorgeous. There's some stupid politics going on at my school too.

I love the sweater cables, and I'm glad I'm not the only one that gets itchy to knit sweaters in the middle of August. Fall is coming, right? (Right??)

The handspun is beautiful, too. And so even! I love the colors. Mmmm...spinning.

Good luck with the politics, and enjoy the enforced day off, if only because it gives you some time to stop...it's rare enough to celebrate (despite the stupidity of its cause).

I'm close enough to Ohio to say that, yeah, October can be sweater weather. October in Michigan has had everything from snow on my birthday (the 5th) to crazy-hot 80+ degree days. (Um. Crazy hot for Michigan in October.)

Lovely yarn and sweater to be! such fine hand spun, you are doing very well indeed!

Is that the start of an Urban Aran cardi? I love the color!

Love this new room. I'm glad she's happy with it too.