Socks, and the survey

Well, it turns out that meetings are good for one thing: knitting. I've finished the wildflower socks, and cast on for a new pair of socks for Rick. Also, I forgot to share the heirloom tomato socks with you, so that goes in today's post, too. And then, an update on the survey (no, I have not forgotten, and neither, apparently, have you all).

I finished the last installment of the Rockin' Sock Club while I was at the Golden Gate Fiber Institute (turns out, that was a while ago!), and even wore them while I was there. It was cold enough that hand-knit socks were a real comfort to the toes, especially while spinning. 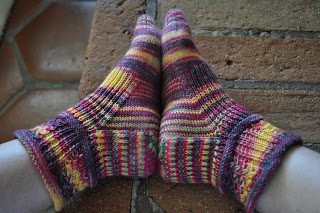 The pattern for these is In Season, and the yarn is STR lightweight, in the colorway Garden Daze. I used my size one Harmonys for these. This is the first pair of anklets I've ever done, and I erred on the side of longer by adding one pattern repeat to the ankle part. The pattern was great fun -- I really like the way it turned out. 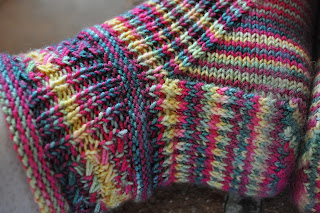 Aren't the colors fabulous? This is one of those colorways that I probably wouldn't have picked for myself in a million years, but that I ended up adoring. I guess that's why I like doing this club so much; it makes me think a bit about my color and pattern prejudices.

I also finished the Wildflower socks last night, even though I can't for the life of me find my notions bag and, hence, my tapestry needle; thank goodness I had an extra tucked away elsewhere. (Does anyone know where it is, by the way? It's also got a small knit giftie for a friend in it, so I really do need to find it...) 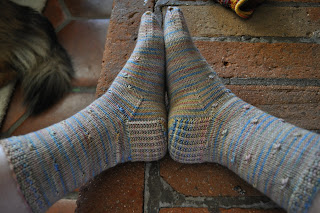 These were a nice, fast, simple knit, which was exactly what I've been needing (although I'm finding myself drawn increasingly to more complex patterns; I think the solution to that has just arrived in the mail -- I'll share that next time). 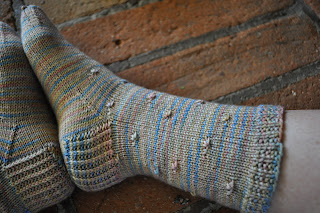 These were knit in Handmaiden Casbah, using my new size one Signature needles (which I adored). I knitted them using a 1x1 corrugated rib for the top and the heel, and I added little wildflower knots (from one of the BW treasuries) whenever the mood took me. That was about it. 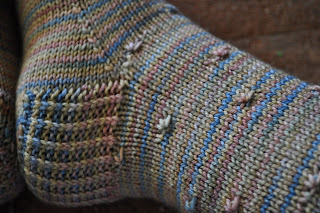 I cast on for Rick's new socks last night. I'm going to try some different shaping on the toe (I'm knitting these toe-up so I can eke every last bit of goodness out of the lovely March Hare yarn I'm using). If it works, they'll be left/right specific, and will fit his foot even better than the usual socks. We'll see.

On a completely different topic, let's talk about the survey. You all have outdone yourself filling it out. By the end of this past weekend, there were close to 300 totally completed surveys. Every time I checked in, there were more respondents, and I can't tell you how excited it made me. Then I got permission to post about it on Ravelry. As of this moment, I have 1,317 completed surveys.

Imagine my shock. (You can also imagine the little hysterical giggles that erupt every time I check on the progress of the survey.)

Data, folks. What we have here are data.

As you might imagine, it's going to take me some serious time (of which I technically have 10% less this academic year) to read through all of the amazing and detailed responses that people have provided. I'm already having more fun looking through them than I really should be, given that this is, technically, work. But I thought you might like to see some initial statistical results, knowing that I'll be sure to share more with you as I go along.

We're a pretty interesting bunch of people. I should also mention that the question that consistently gets the most commentary is the one about stash. There are those more technical questions like "what does constitute a medium stash, anyway?"*, and then there are the funnier and more personal comments about respondents' attitudes towards their stashes, their fears about the attitudes of their spouses/families/friends/neighbors/children toward their stashes, and their worry that they might run out of stash before they run out of interest in knitting. That may be a chapter all on its own.

So, if you haven't had a chance to fill the survey out, please feel free to do so, it'll be up for a while yet. And if you know of anyone at all who might also be interested in filling it out, please also feel free to pass on the url; this is open to all comers.

Meanwhile, Tilly thinks that I spend too much time in meetings, and not enough time with her. 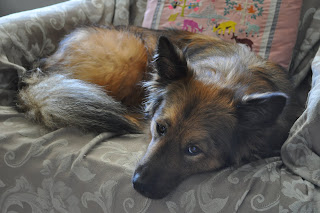 *This summer, whilst in Scotland, Older Daughter was looking for me in a store and described me to the shopkeeper as a "middle-aged lady wearing gray". (!!) When it became clear that I was completely and utterly gobsmacked at being referred to as middle-aged (ah, denial, you lovely protective mechanism; I don't object to being middle-aged per se, I just want to live longer than right now times two!), Older Daughter asked, quite reasonably, exactly what middle-aged was, then? I told her that it's ten years older than I am. Always.

I think stash is like that. A "large" stash is 15 balls of yarn more than I have. Always.
Posted by Knitting Linguist at 4:24 PM

Both those socks look great!

I LOVE YOUR ANSWER, may I adopt it? Of course, I think that means your answer will change to "20 years older than I am now..."

:)
LOVE the socks, but hon, far more than that I LOVE LOVE LOVE that you have 1317 responses. Take that *whap*, you silly, doubting human ethics review panel, you!!

I love your stash definition! I shall adopt that tack in my stash discussion with The professor.

I'm still giggling over the number crunching and other stuff that is going to have to happen for 1300+ responders ..... so fantastic to have a sample size like that.
s

haha, sounds like my dad now my youngest is 11. His response was, "oh, that must mean I'm 40". At least he is not still trying to be 21. I love the wildflower socks and I can imagine how interesting it must be to read that survey

Yeah data! Wait, did I just say that? 'Course your data is a lot more fun than mine. But wow, 1317. That's cool. Wonder what the final number will be?

Do you need more responses? I'd be glad to spread the word. People used to think I was much younger than I am. Since I let my hair go grey, they think I'm older than I am. Very interesting. And stash? Mine is small, because when my knit buds husband took a tour of the house he stared in amazement. "That's it? Your kidding?"

Garden Daze looks like some pansies I got at one of the farm markets once. Beautiful colors.

Pssst, but where are the heirloom tomato socks?

I love your definitions! They seem exactly correct. ;)

Oh, I so recognize myself in your answers, especially the one for stash size!

Congratulations on all the survey responses. My personal experience was that it was fun to answer the questions and think about what I was up to with this passion. You provided that service to over 1300 knitters - thanks!

Chapter? Did you say chapter? As in maybe-someday-thinking book? hehehe...

The survey responses are wonderful. Too much data is such a great problem to have! The stash thing is very funny. Though, depending on how you define your average and the spread of your data, it just might be true that 40% of knitters have a medium/average stash. Or a healthy sense of self deception. Either way.

I laughed out loud at the Older Daughter story. I have a feeling that's one she's not going to live down for a while. I like the answer, though. And it's scary when you start getting grown up enough that you could even possibly maybe kinda be confused with middle aged. But then, it is from the perspective of a middle schooler, to whom the entire world above 16 is ancient.

My favorite stat? The 71% collegiate...guess knitters are a smart bunch, huh?

What beautiful socks! I wish I had a pair to slip on right now, my feet are freezing. I was late filling out the survey, but I'm all done now! Thanks for the reminder, and YAY for all the responses!!

Wow! Impressive response! (and I'm thinking of all that qualitative data mixed in!) That's going to be a lot of fun. And probably some headbanging work too.

Socks are gorgeous, of course. Instead of more complicated, I'm tending towards simple and simpler. But I look forward to something complicated someday!

A big stash is at least another cube or bin more than mine! And my parents are middle-aged still, even though all their parents are gone. And I'm not poor or rich either, even though I could always use more money.

I am glad your survey is coming along so well, initial results are interesting.

I like your definition of middle age but if I apply it on myself I think I have a small problem,,, hehehehe