Quickly while I can

Where does the time go? In my case, at least some of it went to a back injury on Saturday. I picked something up (a four-year-old) as I ought not to have (I forgot just how limp a four-year-old can get when he doesn't want to be picked up) and hurt my back. I've never done that before. Aging is an interesting process...

I'm knitting, truly I am. I spent all day Sunday sitting on the couch with a hot water bottle on my back, a book on my lap, and knitting in my hands. I finished the book, and I finished the second sleeve on Elektra. I also picked up the stitches to knit the right front panel. Once I'm done with that (no color changes, hooray! so this is actual meeting knitting again), and the second front panel, then it's just the collar and the weaving in of endless ends. 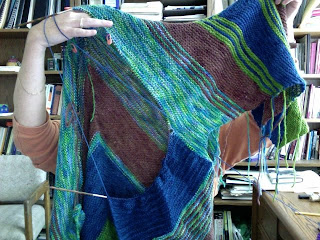 I don't know if you can see what's happening there, but that's the right sleeve I'm holding up. The big triangle that is the back of the sweater curves around underneath the arm, and that big blue patch is the start of the front panel. That front panel folds back when the jacket is worn. Trust me, it all works, and in hanging this about myself (as is increasingly possible as more of it is knitted), it would appear that I chose the right size and this is not going to be too big. But we'll see.

As a parting gift, I have an embarrassing story to share, but fair warning first, it involves both grammar and cursing. Are you ready?

In class today I was talking to my students about different kinds of affixes (prefixes, suffixes, you remember these things from eighth grade, right?), and I mentioned to them that there's a nifty kind of affix called an infix that is inserted right into the middle of a root. It's often hard to explain this one, I said, because English only has one. (Here's where I also warn my students about what's coming, because you should see their faces if I let the f-bomb rip when they aren't expecting it; somehow my warning that all language is data doesn't always sink in at the beginning of the semester.) The only infix in American English is "fuckin'", and it's used as an infix in things like "unbefuckinleivable", where it's inserted right into the middle of "unbelievable". British English can use "bloody" in the same way. So a student made a comment suggesting that this must be a recent change (it's not), to which I, without thinking, responded, "Oh, no. Fucking actually goes back a long way."

Lots of laughter. Followed by a very red-faced professor trying to retrieve the conversation and to keep it from turning to talk of the world's oldest profession. Some days you can't win for trying.
Posted by Knitting Linguist at 3:12 PM

Hope your back gets better soon. In the meantime, enjoy the knitting.

My boyfriend and I will soon be living in with my not mother in law (I don't know what else to call her) and I am knitting lots to keep my equalibrium. She's awesome, but living in someone else's house is hard for me.

I want a word for that shout of laughter you get when something is so totally unexpected!

Aging, boy, I hear you. I just got the call that my first pair of bifocals are ready. Remember, lift with your knees, not your back (which helps unless your knees are going!)

Love the sweater. Really hard to make out what it will look like, but it is pretty!

The joys of aging are infuckincredible! Just wait, it gets better :-)

That is the one good thing about back injuries... they give you time to knit.

Oh, thank you for that funny story (I'm still laughing). And for the education too. I used to know a guy whose favorite word was "fanfuckingtastic." I thought he invented that construction.

My new goal in life: invent the second English infix.

So sorry about the back. At least you have a hefty 4-year-old to blame. The first time I did this I was leaning down to pick up AN APPETIZER. And that, to me, was unbe*******lievable.

(Do you know about the ThermaCare sticky heating pads that you apply to your skin? They are wonderful for when you can't sit on your couch and have to be out in the world with a back twinge.)

that's so funny - your students will remember infixes for ever :-)
hope your back gets better soon!

For Sarah, your first commenter: hubby coined the phrase Mother in Sin from the idea of living in sin, ie not married.

Sorry about your back, take care!

Oh (teehee) oh my! (HEHAHAHA) omg!!!
ROFLOL. I can just see a classroom of late-teens-early-twenty-somethings as you said that.
You poor thing.
:)
I'm glad the back is feeling better. Yes, this getting older thing is not for sissies.
(my word verification is "blotica")
(((hugs)))

My mother said abso-bloody-lutely quite a lot and she had a friend who used to say dia-bastarding-bolical which was even better because it sounded as if it had two bad words in it. But I don't think either of them ever said them in front of a class :)

I hope your back gets better soon.

Oh, they love it when you talk about things like that. They'll remember that class far longer for the slip up. Whatever it takes, right? (The word itself is pretty interesting, too...what little I know of it. You could become "that professor" and have a whole class on it.)

I had to laugh at the back thing. I can throw mine out just by bending over some days (or even just thinking about bending over, I swear). It never fails to astonish me. Hope it's better soon!

hehehe,,,, I am glad the professor knows that important fact and being the rude Israeli I am, I really am bewildered by all the hu ha around a simple word like fuck!

Your elektra looks interesting although a bit hard to follow in its current stage.

I hope your back gets better soon, if not, find yourself someone who does accupancture but make sure she/he is a real professional.

I remember a discussion, oh centuries ago, when the professor shouted across the room, "Fuck you, whoever the student was!" Do I remember the rest of the discussion? No. I believe it was a philosophy professor. He was making a point. I don't know what the point was. Memorable? Yes. Hope your students keep the context of the discussion better.

Yes, but you taught them! Because they won't forget that one. Too funny.

Love the colors in the sweater, and I'll get an icepack for your back. (Mine too. Who knew there was a curb there to step off of in the middle of the sidewalk. When they say stop and smell the roses, I think they need to add, look below them, too!)

Are you fucking kidding me...it's that old? LOL

the sweater is looking great...hope your back is feeling better!

Just so you know -- my two 13 year olds *loved* the grammar lesson and printed out the relevant bits to show their language arts teacher. Thanks for the laughs.

Oh dear! I feel for you, I really do!

Here, in Australia, less well educated people use that word in the same way AND as the only adjective in their vocab - good or bad!

lol - that was hysterical!

I can't wait to see that sweater finished!

i have often speculated on how many parts of speech fuck serves as, now I have additional information. Quite enlightening.

Yes, what Alwen wants! Is there a word for the hard spontaneous belly laugh?

Sorry to read about the necessary visit to the frog pond. How disheartening. Do you have enough enthusiasm still for Elektra to re-knit it, or will you set it aside for awhile?

I'll take your word on the sweater - it looks good! if puzzle-y. ;)

That language story is priceless!