Home is where the coffee is

Guess what I did this morning? I sat, in my house, in my pjs, drinking coffee out of an actual, ceramic, mug.

I don't think I can even begin to tell you how much pleasure that gave me. Especially the bit where I did that after sleeping until I woke up all on my own, not at 4:30 in the morning.

Yesterday went very well. I got up at yeurgh o'clock, and was on the road before 5. I got to see the sun rising over the Mojave, which is a sight to see, actually, in spite of my usual resistance to that time of the morning. (Although the sunrise time of morning is later than usual, these last few days before the winter solstice.) We had an incredibly productive day, and have decided on a working orthography for writing the language (this is a new group whom I have the privilege of working with; they've been very successful with some of the basic language learning programs, and the learners want to take it to the next level, both grammatically and in terms of documentation; for that, a regularized writing system becomes much more important). Although I was prepared and packed to stay the night and work today, I think we were all feeling the pre-holiday-ness of the weekend, so I headed home last night, and made it back in time to kiss the girls goodnight.

Today has been lovely. After that wonderful cup (OK, two cups) of coffee, I sat reading Clara Parkes' The Knitter's Book of Wool (that woman is an absolute genius; I want to be her when I grow up)(more on that book in another post), and finishing the scarf that I decided, in a fit of inspiration once I'd finished my niece's socks, to knit up, very belatedly, for a friend's birthday. I'll be seeing her on Tuesday, so I can give it to her then. Meanwhile, Younger Daughter has modelled it for me. First seriously: 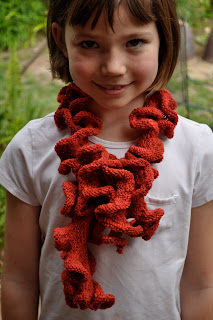 And then not so seriously: 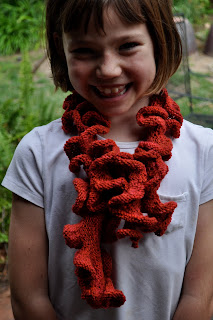 This scarf is from a Churchmouse Classics pattern which I bought last week after walking into my beloved LYS only to have Deb throw one of these scarves around my neck. Usually I run from ruffles, but somehow this one just jumped up and down and begged me to knit it. I bought yarn to knit one for myself, but then decided that this was also the perfect pattern for my friend. I knitted it for her out of the Briar Rose Grandma's Blessing that was left after I knitted Ondule last spring; my friend has commented several times on the color, and it's right up her alley. The pattern is Barb's Koigu Ruffle, and the only change I made was to stick with the size six needles all the way through the pattern, instead of switching to size fours in the middle. I have wound up the yarn I got to knit one of these for myself (which I'll show off next time), but meanwhile, I've become distracted by another Churchmouse classics pattern for this beaded tam. Which I'll be knitting with this Koigu. 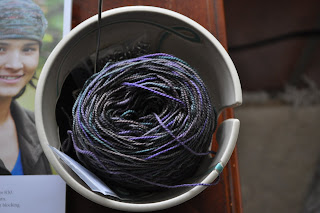 I've had that yarn sitting in stash for ages and ages, ever since I bought it at Common Threads. I'd thought to knit a pair of socks for Younger Daughter in it, but hadn't done it. This tam was also first conceived as a hat for Younger Daughter, but it may not work out that way; if it doesn't look utterly stupid on me (with very very short hair, hats can make one look quite bald), I may have to keep it. However, I do have plans to knit one for each of the girls, and yarn to go with. 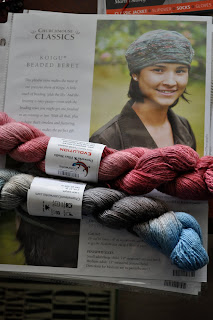 I just need beads, so I may take them out adventuring tomorrow to a bead store, we'll see. Meanwhile, the plan for this afternoon is to knit the tam while reading a book. I may even do some spinning (I've been missing my wheels something awful). Tomorrow will be spent baking granola for gifts, and making soup for tomorrow night's Solstice celebration.

It's good to be home.
Posted by Knitting Linguist at 2:13 PM

Adorable scarf!
I got to sleep in untill 11 again this morning and it was great.. it would have been even better if I wasn't woken up by the phone which was ALL the way downstairs, and then I could have slept in until noon. But it was still nice

Very cute scarf! And an even cuter model.

I'm pleased that the program is expanding and going so well. It's so important to revive the languages!

I am going to follow your example tomorrow morning. Coffee and knittinng. It's a win-win situation!

Did you know that the daylight is even later than might be expected, due to the oblong orbit of our planet? It is a quirk that near Solstice, the daybreak and sunset both move later, the daybreak a slight bit more than the sunset, thereby shortening the days before Solstice. Though truly, we are at a point where the daylength doesn't vary much from day to day, not like it will a few weeks from now. We'll gain not much more than a minute in the next week, but boy, what an important minute!

The colour is fantastic and someone looks very happy to be modelling it for you. Sounds like you are well and truly in the home mode. Enjoy the holidays

Adorable model and scarf. I love that color of Koigu, have some in stash myself. The work trip sounds rewarding, even more rewarding to sit at home with coffee and read and knit.
Happy Solstice.

adorable scarf, now I want to make one!

She's adorable! And that scarf is great fun. Have fun with the rest of the knitting.

I'm so glad you are finished with the frenzy!
And yay for those two cups of coffee in your pj's!
Ok...now I want that pattern for the ruffled scarf. I can think of several folks who need one in my world.
(((Hugs)))

Oh, there's nothing like a long, slow morning, is there? Glad you got to stop and enjoy the coffee. =)

That scarf is great, and the model is adorable. (I hope it's ok to say that...insert whichever adjective is ok at that age...)

Love the colors in the Koigu. I haven't knit with beads yet, but it's on my list of things to try.

The scarf is really cute. I love your plans for the tams.