Or at least, that's how it seems to me. Where did this last year go? It's hard to believe that at this time last year, I was looking forward to my sabbatical, and now it feels like it's been eons since then, except that I can't really figure out how those eons all fit into one year. The same year that my daughters insist took forEVER (somehow the time between Christmases seems to them to be always too long). Physicists ought to study this phenomenon, it might lead to something interesting.

In any case, I don't know that I'm particularly ready for the new year. Or maybe it's that I feel like I already had my celebration of letting go of the old and planning for the new at solstice this year, when we all handed over those things that weren't working for us, and took up something new to work for this year. I'll admit to all of you that I chose to give up fear, and to work on cultivating hope instead. I don't know that it'll change anything about the world out there, but if it changes how I walk through that world, then it's worth the effort.

The girls and I have had a lovely start to our week; we've been trying to get out of the house so Rick can get work done (now that he works from a home office, these weeks when everyone is in the house at once all day every day can be a bit trying for him). The girls spent all last week begging to go to SeaWorld, and I kept saying that I was absolutely, 100% sure that the passes we got last spring surely would have the week between Christmas and New Year's blacked out. Alas, I was wrong in my assessment of corporate greed, and we were free to use those passes to go, which we did yesterday, along with fully half of San Diego county plus members of assorted other states and countries.

We decided to forgo the rides and to not sit in the splash zones of the various shows (I can tell you here and now that when a 5,000 pound orca decides to splash you, you get wet), as it was rather chilly. But we did get to feed the dolphins and the bat rays, which is always a huge hit with the girls (and I freely admit that getting to stroke a dolphin is high on my own list of Very Cool Things). (Feeding rays is a really weird experience, though, as they act a lot like vacuum cleaners and suck the fish right out of your hand, not to mention the fact that they are covered in a mucus membrane -- who knew? -- so touching them feels like petting a snotty piece of rubber.)(In a good way, though.)

Today we went to the bookstore, where Older Daughter had a gift certificate from Christmas (she's been asking every. single. day. since Christmas when we were going to go), then I took the girls to Q'ero for lunch (such a treat!), and to Common Threads to find buttons for Sprossling. I did find some that I think will work well, but got home too late to take pictures, so I'll have to do that tomorrow to share.

At the same time, I'll take some pictures of the two Sprossling sleeves (both in progress) to get your opinion on colors. All of the yarn for the sweater comes from the same dye lot, but when I started a new ball on the first sleeve last night, it seemed to me that the new ball is significantly lighter than the others. So, I ripped back the new yarn and a little way into the part of the sleeve knit from the other yarn, thinking that I'd start the new ball by alternating rows with the old ball. But then, just to be really sure, I decided to put the first sleeve on waste yarn, and to start another sleeve with the new yarn; I'll knit the whole thing and see if it seems different enough to warrant knitting both sleeves out of the new yarn (at least there'll be some purposeful-seeming consistency, because I'm not ripping out the two fronts and the back in order to knit the whole thing with alternating balls), as well as the collar and button bands. However, if it was just that little part of the ball that seemed particularly light relative to the little part of the other ball I had already been working with, then I'll continue that first sleeve by alternating between balls to start.

I'm not sure if that made sense, but it seems like a plan in my head. I'm halfway through the increases on the second sleeve (which puts me almost to where I was on the first sleeve before I stopped), so I have high hopes of getting through it pretty quickly. Which is what I'm going to go do now.

I was going to share pictures of the girls feeding the dolphins, but the camera ate them (this is what happens when I use the old camera, grrr...), so you can see this picture of Tilly instead. 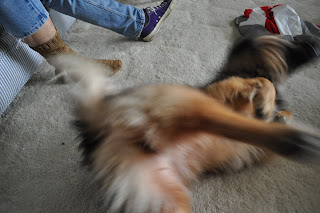 I think she needs a walk.
Posted by Knitting Linguist at 8:17 PM

That's what I love about home educating the boys, we can hibernate in the holidays and go out and enjoy places to the full when everyone else is in school. Glad the girls enjoyed themselves. I hope the sleeves work out, I don't know how balls in the same dyelot can be so different, but it seems to happen quite a bit.

There was a study of how our time perception changes as we age, I remember reading about it.

Apparently, when we are young, say 8 years old, one day is a large percentage of our total life, and therefore, it seems longer. Conversely, a day for a fifty year old is just another of some 18 thousand-odd days we have already lived.

Wow, you've been having a fun week!!!
And Tilly does indeed need a walk. What end is what in that photo anyway? Wait, wait, please DON't tell me! *wink*

Replacing fear with hope is a good way to start the new year.

Color inconsistencies can be a real headache. I hope you get it figured out.

I love your resolution. Sounds like something that all of us could use to do! Seems like it can't help but change the way you walk through the world.

I hope Sprossling's colors work out, without too much re-knitting!

Here - getting wet seems ideal - it's hot and h.u.m.i.d after five days of (hopefully) drought-breaking rain! But I could imagine it would not be so much fun in winter!!

I agree with you and have been wondering where the year went. I was sitting in my office on 31 Dec actually surprised that it was 31 Dec. How can that surprise me??

I hope you enjoyed Sea World despite all the busy. I love that corporate greed doesn't apply (in this case) to kids favorite activities. Sounds like you guys are doing a decent job staying busy and not bothering Rick.