It has been a very good week. In spite of my desire to slow down, and in spite of the fact that I developed some weird kind of head cold thing (first time I've been sick in a long time, which seemed a hint of sorts with regard to the whole slowing down thing), I didn't quite manage it until Saturday. Before that, I spent a lot of Wednesday, Thursday, and Friday cooking, which was fun (and delicious), but not so much restful. In that time I made: pickled red cabbage, pickled cucumber salad, pork pie, rod grod, two loaves of cardamom braided bread, a duck, sausage, and celery root stew, three baguettes, and the most stunningly delicious chocolate cake EVER (I didn't make the marshmallows). (I have finally found the buttercream frosting of my dreams, and I am content.)

I also received a ton of knitting Christmas presents. I'll show them off a few at a time over the next little while; there was a lot of yarn, plus a few nifty gadgets and bags. For example, Rick and the girls got me this: 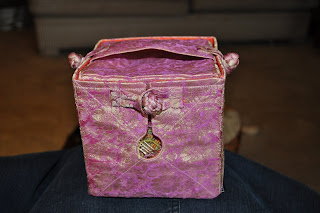 It's a Lantern Moon knitting box, and I love it. When they came in at Yarning For You I got a call to let me know (they remembered I'd been lusting over them but missed grabbing one from the first shipment; they are so good to me), so I took a picture of one and texted it to Rick, who very wisely went over that afternoon to pick it up. Good man. I particularly love the inside, which is a beautiful cheerful orange; I'll have to take a picture of that.

My really big present from Rick came as a complete surprise. I'd sent him my Loopy Ewe wish list, on which there were, apparently, a few things that I'd added without ever really thinking I'd get them (am I the only person who does that? It's a sort of vicarious pleasure -- I either dog-ear lots of pages in a catalogue and then throw the catalogue away, or put things on a wish list even though I know I'll never get them). But he completely surprised me, and ordered these stunning beauties: 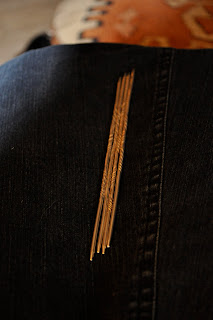 Those are size two silver Celtic Swan dpns (there's a fifth in the set, as well). I love them. I have a set of size ones in bronze, one of the first really nice knitting tools I ever got (also from Rick), but these are truly a work of art. Of course, I couldn't not use these things, so I immediately put yarn into the box, grabbed the dpns, and cast on for the the Churchmouse Turkish socks (the third of the Churchmouse patterns I got at Yarning For You a few weeks ago), and knit a pair for Older Daughter, who loves short socks like this. 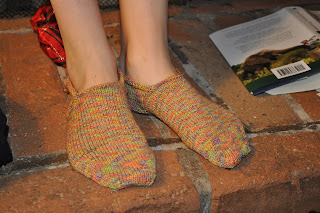 Aren't they cute? They're knit out of Sockotta yarn, which is a bit rough when knitting, but which seems to fit and wear well (it's a cotton/wool/nylon blend); it's nice to find a cotton blend yarn that's fun to knit with, living here in San Diego. I also love the colors. 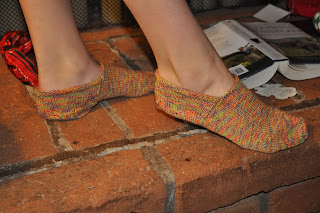 I think she'll wear these a lot, and they were fun to knit (and the needles were a dream; what I love most about them is the folded part in the middle, which holds stitches on the needles like nobody's business, but the smooth tips make for quick knitting). And I'm pretty sure that I have enough of the Sockotta left to knit a pair for either myself or for Younger Daughter.

That probably won't happen for a little while, though, as I'm completely engrossed in Sprossling right now. I don't have any pictures, but I have finished the back and the left front, and am well along with the right front. I am really hoping to finish it up by the end of the week, but we'll see. I do have some plans to take the girls to do some shopping with their little bit of Christmas money, and to SeaWorld and the zoo during the week, none of which are particularly knitting-friendly, but that's OK.

Meanwhile, I'm enjoying a leisurely morning at home, wearing my other most-favorite Christmas present (from my sister-in-law and her family). Check these out: 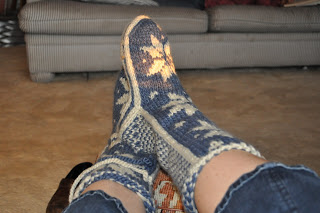 Are those not the absolute best slippers in the world? They even have little tassels that hang down on the sides! (I am unreasonably pleased by those tassels.) They have soles, too, so they don't slip and they can go outside. I have been living in them ever since I got them; the moment I get into the house, the shoes come off and the slippers go on. And they're knitted! How cool is that? And I didn't even have to knit them myself.
Posted by Knitting Linguist at 9:22 AM

What a lovely batch of gifts you got!!!
:)
I'm glad you're beginning to feel better, and that you're slowing down to the speed of light for once.
(((((hugs)))))

I can understand the love of the slipper socks. I had some years ago, and they were fantastic, so comfortable to wear, even for someone that doesn't like wearing shoes

Both of those slippers look great! Hope you had a great holiday!

That cake looks like a ton of work. I made cranberry cake that is really easy. I am a rather lazy cook, i'm afraid. I'm interested in those needles. I usually only like bamboo dpns. Maybe I can talk the Yarnery into carrying them...Nice gifts, BTW>

It always takes a little while to settle into a holiday. The end of the semester always feels a little like I'm Wile E. Coyote running off a cliff, stopping to look around, and then plummeting down. Except there's no rock bottom...just vacation. =)

Love the Christmas goodies. I do the exact same thing with wish lists; I make them, ooh and ah, and then delete them the next day. All of the pleasures of looking, none of the next-day guilt. A husband that's on to the process is definitely an extra bonus, though. Those needles look lovely!

Wow, Rick did good! Cute slippers too, why is it that things somebody else knit for us are always better than the things we knit ourselves?

I'm glad you had a good holiday & hope you are feeling better!

Lovely everything (cooking, gifts) and I hope you will regain your full healthy status soon.

Waht a lovely group of knitting-related gifts! Well done to Rick and SIL.

What fabulous gifts from your family! I'm glad you had a nice holiday :-)

No one in my family knows how to buy knitting stuff, so while I did get fabulous stuff, it wasn't knitting related.

I'll be trying that cake for New Years' -- thanks! Love the needles, they are beautiful.

Gorgeous slippers! All of them, but I'm especially jealous of the tassels.

Those are very cool knitted slippers!

I'm so happy that it sounds like you had a lovely Christmas.

lovely - all of it, Rick must rate as one of the best spouses for a knitter, and I can't think of a better gift that knitted slippers with tassels!
enjoy the break ... enjoy the girls and the time to knit
na Stella

Awesome giftage!! Evidently you were a good little girl this past year!

Pink and orange bag. Love. I do that all the time, I'll go look at a website and put a whole bunch of stuff in wishlist or in the shopping cart and then just turn the computer off without getting any of it. Makes me feel happy to just see the pretty things.

The churchmouse socks are very cute. Hope you found time to work on the sweater if not finish it. I'm going to agree and say the slippers are very very cool.

Jocelyn, Are you going to the GGIF this year? I am and I signed up for the classes with Judith and Jaycee. Hope you'll come. I know Lori and her friend are coming up from San Jaun Capistrano. I'm going to drive up this year so I can bring my own wheel and lots of bedding and stuff.
Marta