That's what I'm dealing with here. Sock thwartage. I look at that sock, and it looks back and me, and what it's saying in its little woolly brain amounts to, "Thwart, thwart, thwart." Plus an evil chuckle or two.

Seriously, though, I'm on iteration number (if I'm keeping count correctly) four. Heel flap version two. I can't tell you how many times I've cast on for this thing. I took it in the car on Saturday, since we had all the long drive up to Indian Wells for me to knit. But I really didn't want to knit it. In fact, I so didn't want to knit it that I also took along Sprossling which, by contrast, is proceeding swimmingly. (Of course, now that I've said that, Sprossling will turn out to be three sizes too large or too small, and I won't figure that out until it's all put together.)

So I sat there in the front seat, looking at my two knitting bags, one full of lightness and joy in sweater form, the other full of a dark and brooding ball of yarn plus four needles. And I told Rick that maybe this wasn't my year. That this year just might have to be the one that goes by without any knitted presents. Because honestly, if I'm knitting stockinette socks (which I love), with yarn that I thought I'd love, for a person whom I really really love, how could that be going so very wrong? And since it is going so very wrong, it's probably A Sign from the Universe, telling me to move right along and do something else. And Rick said, "Come on, it's socks! I mean, you can knit a pair of socks in a day, if you really want to, right?"

And people, it was like a red flag to a bull.

Even as I wanted to poke him in the eye with my dpns (but since he was driving, I refrained)(also, they were my Signature dpns, and I didn't want eye goop on them), I also knew that he was right. It's socks. Stockinette socks. This is not (as the lovely sign that Fuzzarelly sent me a picture of said) rocket surgery. So I cast on again, right there in the car. And then swore, because this yarn hasn't liked all the ripping out to which I have subjected it, took out the cast on, wound off the first bunch of yards of yarn (the bunch of yards that have been an incipient sock three times already), tore that off, and then cast on again for what I sincerely hope is the last time, because if I don't bust a serious move, there will be no niecelet socks for Christmas this year. 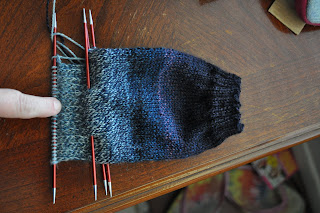 They are not going to be long socks, because I have to be realistic. And they are not going to have an eye-of-partridge heel, ditto. Slip stitch heel, yes, but I just know that trying to keep track of alternating slip stitches is asking for trouble. So, I'm halfway done with this heel flap, and yes, that is still sock number one. But I'm stubborn, even if I have the self-discipline and attention span of a hopped-up newt, and I'll finish these socks if it kills me. Hmph. 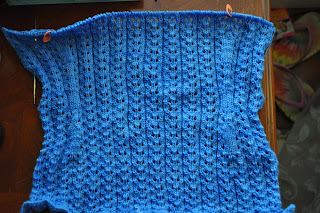 That is the back of Sprossling. I have completed the waist shaping (which entertained me no end: look! disappearing lace motifs, and look! they're reappearing; I am apparently easily entertained), and am less than an inch from the armhole shaping. Oh frabjous day!

I actually got a lot less knitting done on Saturday than I'd thought I would. That day was devoted to taking Younger Daughter to her very first feis (pronounced: fesh, which I didn't know until we got into this whole Irish dancing thing), which is an Irish dance competition; this one is hosted annually by her dance school, so it seemed like a good first one to go to. We headed out early on Saturday so that we could get to Indian Wells (near Palm Springs, about 130 miles away) in plenty of time to suss out the whole situation before it was time for her dances. I felt (and I'm sure I looked) just like all of the muggles who got dragged to Sock Summit. Shellshocked. A little freaked. A little in awe. I had no idea that this whole world of people existed, or, quite frankly, that there were so many very curly wigs on all the planet. I felt a little bit like I do when I first go to a field site, like my job is to watch and absorb and watch some more. But can I tell you how surprised I was to find myself gluing my daughter's dance socks to her legs with body glue? I had no idea I had it in me (and I'm still not sure how I feel about it, but dang, her socks stayed up!).

I think even Younger Daughter was feeling a little overwhelmed sometimes. 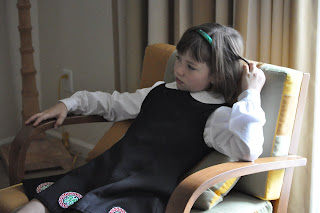 It was a lot for her to take in, too. 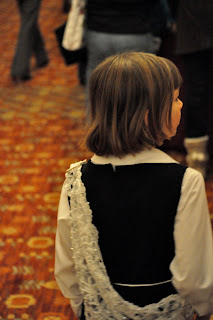 But she was bound and determined to do this thing, and to be as cheerful about it as nerves would let her. 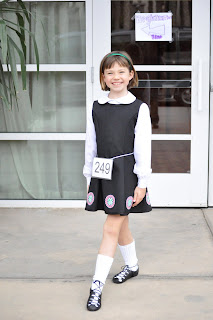 She told me she was really nervous for her first dance, 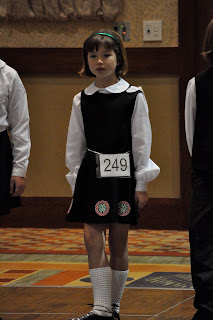 but that once she got through that, it was really fun. 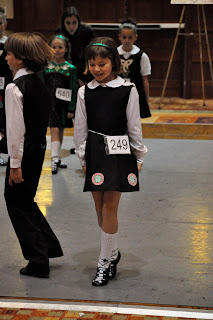 She danced in five dances: reel, slip jig, single jig, and then two first feis specials. And she even won second place in one of her first feis specials (the slip jig one), and got to stand on a podium and receive a sash. Most importantly, she had fun, and she wants to do it again. I call that a success. Even if it does mean that I'm going to have to buy her one of those curly wigs.
Posted by Knitting Linguist at 4:21 PM

Your first feis -- how fun! I have been to many of them, mostly watching the daughters of friends, and it never gets boring. One group did so well (a dance school in Irvine, I think) that they were invited to a competition in Ireland.

BTW, Younger Daughter has fabulous posture in those pix.

So glad the dance went well. It's great to get out on stage before you get too old and develop stage fright. Congratulations to Younger Daughter!

And as for the sock? I think they all try to thwart you once you decide to give on a deadline. But you can do it! Plenty of time left. =)

Sprossling looks wonderful. I love the color, and I'm also entranced by the appearing and disappearing lace columns.

Well done to your daughter. I hope this sock comes together for you now. Now I know why I've never started any!

NO not the curly wig!! i can't imagine what the deal is with those, when these kids have lovely hair of their own. I always was jealous of the Irish dance girls costumes when I was a kid. I don't think they did wigs back then. Glad it went well. Joining you in much ripping out of last minute gifts.

I'm still laughing about your Smoke on the Water ringtone. That just crackers me up.

Also? thanks for your support.

And? I just began the third iteration of the heel flap on my latest pair of socks. I tried the eye of partridge. I tried stockinette edged with garter stitch. This time, it's regular slip stitch and I'm stickin' with it.

Lastly? Kudos to daughter for dancing and to mom for taking.

You know niecelet won't mind at all if they are after Christmas socks. It prolongs the period of time one gets gifts. Deadlines, smeadlines some times you just have to forget about them. You've had quite a bit of them lately and I think your right the universe is telling you to take a breather. Knitting is fun not work!

look at your sprossling! I am still waiting on my yarn. :-( sigh. I haven't even gotten a shipping notice yet.

sucks re your socks not cooperating! I just cast on for #2. I hope they are not too big, it's hard to judge these things.

Younger daughter's feis looked like such fun! Congrats to her!

You do good words. Thwartage!

Curly wigs? One more world I know nothing about. Amazing the things hidden in plain sight. Once I did TB screening at Golden Gate Fields, for the folks who travel with the horses taking care of them. You'd never guess how many people are going about their own little world right there between the freeway and the bay.

Curly wigs??? Isn't that just a tiny bit, ahem, stereotyped? Good fun, though. I never did Irish dancing but I did lots of Scottish Country dancing and I loved it. It's gentler than Irish but in the right circumstances shouting is permitted.

And get on with those socks. You know your niece won't mind if they don't have eye-of-partridge heels :)

Buy a curly wig? Buy it?? Not knit it??? Really, what kind of mother are you?

Seriously - what fun that your young lady won a sash her first time out. And you will rule over those socks soon, I'm sure.

Oooohhhh, but I love that yarn!

Really, curly wigs? What about all those straight-haired Irish? (Or is that like saying, "You can buy socks at Wal-Mart" ?)

I've never been to dance-only event, but there are often dancers at Irish music festivals, and I love to watch. Enormous fun!

And I've often noticed that passionate hobbyists of any stripe often have more in common with one another in terms of attitude than you'd think.

LOVE the coverage of the feis. There is something so appealing about hearing about Younger Daughter's fun and thrill in the competition. It brought back memories of similar events as a child.