So, I do believe I've mentioned that I have a lot of deadlines. A lot of them. I have a list. Actually, I have a lot of lists. There are the lists that I write on each day's calendar entry, of the things that ought to get done that day (the ones that don't get done have to get rewritten on more realistic dates), and then there are the lists that I put on a little post-it note that I move from day to day because I know darned well they're not actually doing to get done when I think they will, and then there's the list of big ongoing projects about which I should be (and am) feeling a constant state of low-level panic all the time.

Am I the only one who does this?

When my week started, my daily lists had tons and tons of little things (go to this meeting, type up those minutes, prep for that class, etc); my move-as-necessary list had a smaller number of medium-sized projects (write a letter of recommendation and take to class to give to student; put together independent study contracts, get them signed by the department chair, and take to class to give to students; etc); and my big-project list had a number of items with associated drop-dead dates (write grant proposal by 2/2; peer review article by 2/15; write 8,000-word chapter by 2/15).

Did you note that last one? That's the kicker. I've been putting it off. I got just about every single other thing on my list done, plus a few that weren't on the list (like cleaning out my desk trays and putting away all of my knitwear neatly on my closet shelves). I've been getting to the point where all that's left is to either floss the cat or write the dratted chapter. So I blocked out today, and the next two weeks' Thursdays and Fridays for it. In preparation for today, I put together all of my notes from the original presentation, which amounted to a scant 4,235 words (but who was counting), found all the articles I'd used as references when preparing the presentation, plus all of the other things I've written of relevance. I went swimming this morning, and then I sat down, bound and determined to have something that could reasonably be called a "draft" by the end of today, howsoever holey and drafty it might be.

I typed and I wrote and I contemplated and I said BLEH at the computer screen and I cut and I pasted and I sighed and I moaned. (Ask Rick.)

Rick cackled. I'm calling it a draft and making lists for the next stage, which is going to be quite involved, as I've not said what I need to say to make it clear why I'm saying all of the things that I did say. And it will take more words to do that, which means I need to make some of the words I already have go away. Do you think insect repellent might work?

In the meantime, an absolutely lovely box arrived for me the other day, just when I needed it most (I was still hip-deep in lists, instead of being chin-deep in one big project). It was from Chris, and while there were many things in it that I will be sharing over the next week or so, you have got to see this today. 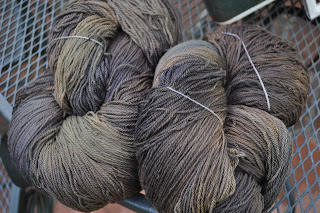 That, my dears, is two skeins of the most absolutely gorgeous Grandma's Blessing you ever did see, given to me by my dear friend Chris, so that I can knit something along with her for the Knitting Olympics. I just can't get the colors right. That brown is more chocolatey than that. 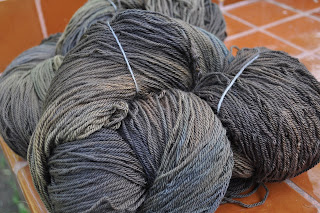 That's not quite it, either. It's much less ashy than that, and much richer. I'll work on it. In the meantime, go see the yarn she sent Anne; they're variations on a theme, and quite stunning. I think there are a few more variants out there; maybe I can get some pictures to share. And if you're in the mood for luxury, Chris has some of the most gorgeous handpainted cashmere you ever did see. Man, mmm....

So that's where I am. Either too many words or too few, but the yarn? It's just right.
Posted by Knitting Linguist at 2:45 PM

Good luck on the chapter! I'm not sure what you're writing, but I'm sure it will be fabulous :-) You'll figure it out. And for the record, I keep my lists in my head.

The yarn is drop-dead gorgeous. What a fabulous friend to mail pretty yarn . . .

It's nice when yarn makes everything better!

The yarn is beautiful! Can't wait to see what you knit with it.

I sympathize with the list-making (and even more with the redundant words). You still have time, though, and it sounds like you made great progress today! It's always better (for me, at least) when it's all down and out in the open so I can see what to cut, what to keep, and what else I need to add. Good luck with the list wrangling, and don't get any insect repellent on the yarn. =)

And when your yarn's right, all's right with the world~

i'm on the other end of the chapter - the publisher waiting for all the chapters to be submitted. what usually happens is that the bulk of the chapters come in (as yours will, because you're diligent about it), some contributors have the requisite number of dead grandmothers, etc., and promise it "soon," and some just hide from the volume editor, and me.

we all love the ones who meet the deadlines. by the time you finish, it'll be good.

and then there's yarn, and as another commenter said, yarn makes it all ok.

Shoot, cutting out 1,000 words is easy. Just like ripping out stitches...I just got a book called the Checklist Manifesto. I'm not even sure what it is really about, but a great title.

And that's all that matters, lol.
My mum always had lists. I think it must be genetic, I have lists too.

I love writing this sort of stuff, but I am inclined to the wordy side of things. That's a good thing, I've always thought, better too many than too few. I can always pare it down.

However, if you're that far, and have so much more to say? Oy!

I will hold the word "succinct" in my head and beam it in your direction.

(the yarn is lovely, but I'm home. I'll see the truly scrumptiousness of it from the office monitor - next week!)
(((hugs)))

As long as the yarn is right everything is peachy, isn't it?

Good luck with your big assignments

oh and please do not mention that cashmere again! :)

I don't do the list making thing except for long term, such as what I need to get done this quarter at work. There basically isn't a choice about it since nothing can move, but I find it very reassuring to get to cross something off!

Um...I seriously think that whole last list is the kicker. Ouch. Having more then you need isn't a bad thing. I sometimes think its easier to rephrase/take something out then to have to figure out how to get something in. (Oh oops, I kept reading...I see the problem now...)

Even though you couldn't quite capture the true colors, I know how absolutely lovely browns can be.

I can totally relate to the lists of lists. And after you've got the overlong draft? Is exactly when I outline. Then I can see what stuff is necessary, and what stuff has to support what's necessary, and the extra interesting things that might work somewhere else can get cut to a separate file or pushed to the end of the manuscript until I find a better place for them. Outlining at the beginning doesn't work so well for me, since I'm capable of procrastinating on that task pretty much indefinitely!

Oh, my, that yarn is absolutely right. It is my idea of color perfection.

Isn't it funny - to try to describe it in words would take oodles and oodles of space, but there it sits, entire in a neat package.

Did you pick your beads yet? I like the darker ones as well.

I hope you got your chapter worked out, too many words is often harder to remedy than too few!

Gorgeous yarn, I just ordered two skeins of Grandma's Blessing in a gorgeous blue/green colorway last night. I am not sure if it's olympic knitting, but I am picturing a lovely shawl with wave patterning. What are you knitting with yours?

And that's why I hate "writing" - by which I mean serious writing, for-publication writing. I chew on it and chew on it until I can't swallow it myself!

I'll cut out words for you! I'm very good at using too few words. (I've never met a transition, or intro, or conclusion I like)

Good luck! You can do it! You are doing it. Thank goodness for yarn.

I am shocked that you didn't floss the cat instead. Feline dental hygiene is extremely important......