Sticking my head up

So, I've now taught one week of classes and survived. I'm glad to have gotten through the first Monday of the semester, as that's my long day. I get to campus around 8:00 in the morning, and don't leave again until about 8:30 at night. The big stretch is my two afternoon classes, when I basically teach straight through from 4:00 until 8:30. But it went well (although I was definitely hungry by the time I finished and got home!), and my field methods class was as much fun as I'd hoped it would be. It's always hard to tell how it'll go that first night. Basically, the point of the class is to get a person who speaks a language other than English (and preferably a language to which neither I nor my students have been exposed) to come every week to class so that the students can elicit linguistic data from her and then analyze it to learn how the language works.

This semester, a friend of mine who speaks Bengali is the consultant, and she's clearly going to be fabulous. The students are always completely terrified beforehand, because they just don't understand anything about what's going on, or what this kind of thing looks like, or how it feels to have to write down everything someone says and then analyze it. So the first week, I give them about twenty minutes to get basic course business done, and then I get the consultant into the classroom and we do our first elicitation, and the only one that I will run (after this, the students decide what to ask her, and they do the asking and the writing; my job is to help guide them in their planning ahead of time and their analysis afterwards). By the end of the class, half of them still looked scared (normal), and the other half was running high, talking about how much fun that was, and they'd had no idea that it would be so much fun, and they couldn't wait for their turn to do the elicitation. Heh. Gotcha.

All the prep for that, plus the many other things on my plate right now (I'm simultaneously longing for the end of February, and terrified by how quickly it's coming), means that I haven't been doing too much knitting. I took the girls with me up to Tehachapi on Sunday to do fieldwork; they played outside in the snow: 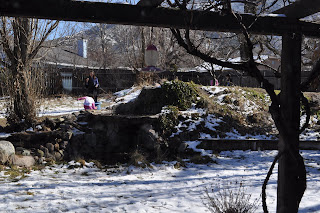 while I worked inside and knitted away on the Babushka (which is very good meeting knitting, it turns out). I'm making progress, but it looks exactly the same as it has for quite a while now (in that way that shawls have, midway through), so I won't share any pictures right now.

I did, however, finally get the second set of beads I've been waiting on for the Tibetan Clouds Stole, and I'm really glad I did, because I think we've got a winner. See what you think. 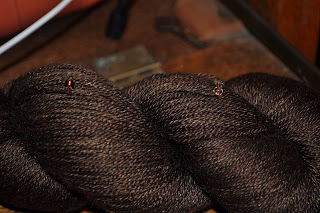 (I think you can click to embiggen.) I am leaning strongly towards the one on the left, which is a silver-lined amber bead, as opposed to the one on the right, which is a copper-lined clear bead. The darker one (on the left) seems subtler to me, while having what looks to me like a richer fire. Opinions? Thoughts? I'm dying to get started on this, but want to finish the Babushka first, as I have both Older Daughter's sweater and a secret project on the needles right now. I'd be feeling bad about the distraction of the secret project, but Younger Daughter will benefit from it (and heck, I wanted to knit it), so at least I'm making good on my promise to each of the girls to produce something for them in the near future.

Meanwhile, the clouds are back, and we're in for some more weather. I don't think it'll be as wild as it was last week, though, when we got so much hail that it actually sat on the lawn for several hours before finally disappearing. 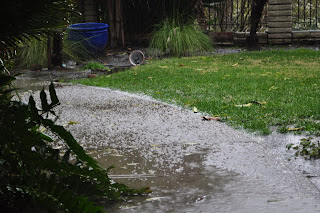 It's just a little surreal, especially with all that green sitting incongruously in the background. 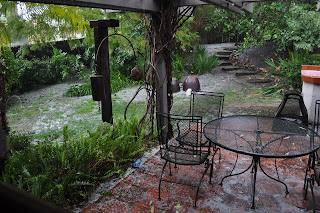 Weird, huh? I'm hoping it doesn't do that again tomorrow, as it's a swim morning for me, and swimming in the hail and sleet isn't as much fun as it sounds (yes, it is an outdoor pool, and yes, it is heated; I'm not even close to crazy enough to swim in an unheated pool)(although I am apparently crazy enough to swim in the sleet; I don't know what that says about me).
Posted by Knitting Linguist at 4:01 PM

Just leaving a note to say hello. I gather that you live in the Southern California area, since you're having the same weather as me! I am also an avid knitter, occasional blogger, and former linguistics major, teaching ESL at a community college. So I feel like we have a lot in common! My blog is at lostthethread.blogspot.com

Wow that class sounds so fun! The bead on the left, definitely.

I well remember the first time I observed a mono-lingual demonstration! Oh, it was exciting! Then when I had to elicit my own information (Persian consultant), I wasn't so excited. It was much more difficult than I expected.

Beads: I like the darker one on the left. Yes, it's more subtle and yes, there is inner fire in it.

I'd call it dedicated.

Can't help with the beads, but I'd be happy to take it all off your hands (especially the yarn) if you feel you just can't face this difficult decision.

(I have cell photos of hail on my car from last year. Crazy!)

Would the high number of different Mayan languages be because of difficult terrain and isolation, similar to all those different languages in France and Spain and Italy that we don't think about much? I ask you, because you're the obvious person in my acquaintance to ask. Saw an astonishing language map of Guatemala last week. All those languages in a country about as big as Tennessee! Humbling.

Yes, the one on the left! YES!
:)
Very odd weather on either side of the country, frankly...stay warm, and I'll try to as well.

That class sounds absolutely fantastic! But take some carrots or something to get thru the night? Ok...Mother Hen signing off!
(((hugs)))

As a TESOL teacher, that class sounds like fun - scary, but fun!

That class sounds most interesting. Please tell us more. I tried to learn a bit of Bengali when I lived in Bangladesh but I didn't get very far. Here in Seattle at the granddaughters school hablamos espanol. There are signs in Spanish all over the school. That will be my next language endeavour. I had 2 years in college but that was a long time ago.
Janet

That class of yours sounds like fun to me. From some reason it reminded me of a girl I once met who had an amazing talent for languages, she learned it amazingly fast like by osmosis or something, she talked fluent Hebrew after being in Israel just a few days. When I met her the first time we were talking and my friend asked her what is a tuki (we listened to a song that was about one) and she said: parrot? it was correct, just amazing!

And I definitely like the left bead on the yarn!

The one on the left for me too.
That must be the best bit of the job, coming out of the class and the students on a high.

Bead on the left!

YES to the bead on the left, it caught my eye in the photo before I read about them. And your field class sounds amazing; makes me almost want to go back to school. Almost.

I second the motion asking for more info about the class. It sounds very interesting.

Go with the left bead!

I'll join the group love for the amber beads. I think you've got a winnah!

I feel your swimming pain...really, swimming with floating hail in the pool doesn't sound attractive in the least, heated or not! (Though I'll confess to a touch of envy on the heated part...along about mid-September, I have to call on all my Maine-bred hardiness to continue using the pool!)

Making it through the first week is definitely something to celebrate (especially with long days like that...they hurt). Sounds like the semester is off to a good start, though! It's so nice when the class goes the right way on the first try.

Love the beads. The one on the left wins hands down.

Hope you get good weather for your swim! (What difference does it make if it's sleeting, as long as you only come up for air?)

Making it through the first week is definitely something to celebrate (especially with long days like that...they hurt). Sounds like the semester is off to a good start, though! It's so nice when the class goes the right way on the first try.

Love the beads. The one on the left wins hands down.

Hope you get good weather for your swim! (What difference does it make if it's sleeting, as long as you only come up for air?)

The bead on the left is the right one (hahaha - I make myself laugh, I'm so easy).

But the right bead would be perfect with lighter yarn - so the clear glass showed up as a flicker, not as what the eye first sees as something stuck to the yarn.

another vote for the bead on the left!

I think the beads look really good with the yarn. I pick the one on the left too though.

Hey the pool is heated. Sleeting or not you'd still be comfortable I think.