I had firm plans to post this weekend. I even had finished objects to show off: the Just Enough Ruffles scarf is off the needles and has been worn several times, and the first of my happy green spring socks (not the official name, but I can't remember the pattern name right offhand; it'll come to me) is also off the needles, and I'm about halfway up the foot of the second sock. (Adamantas! I knew it would come to me.) I'm also working away on my no-concentration-necessary scarf during Older Daughter's soccer games, when I can barely be trusted to remember to K7 K2tog consistently, and most certainly cannot be trusted to manage anything more complicated than that.

But the weekend itself got a bit complicated. On Saturday, Rick had to go down to San Diego to work, so the girls and I devised a plan. The plan was that after Older Daughter's soccer game (not such a good one this week), and the speediest run to the farmer's market you ever did see (we were in and out in 15 minutes flat, with strawberries, blueberries, English peas, fava beans, apples, two loaves of bread, two jars of jam, and a few other things), we caught our local train to Oceanside, where we transferred to the Coaster for the trip to Old Town. It was certainly the way to go; the girls played games, and I knitted my sock and read my book and enjoyed the views and generally loved the fact that I was not sitting behind the driver's wheel of a car. It took almost twice as long as driving, but was far more than twice as relaxing. Don't they look like they're having fun? 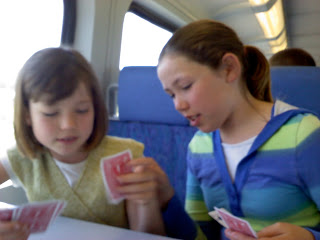 (Apologies for the crummy camera-phone picture.)

Of course, poor Rick wasn't having nearly so relaxing a time. Turns out the drillers didn't bring what they needed to in order to drill the wells he wanted, so he needed to go back to work after lunch. So the girls and I hied ourselves to the San Diego Zoo, which is always good fun. We saw polar bears and elephants and meerkats. 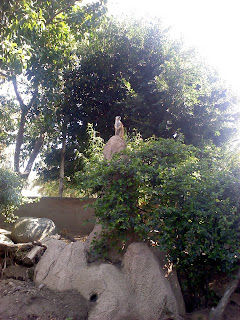 We saw a condor flying. Alas, the picture was really bad, but let me tell you, a flying condor is a thing to behold. They are massively huge; the girls and I spent several minutes feeling rather awed by our imaginings of what it must have been like to see them, nine-foot wingspan and all, actually flying in the sky overhead. (And there was one rather lovely moment when a zoo bus came by and stopped just a bit too long, which led one condor to fly over to see if it was dead yet.)

Of course, the biggest crowd of people was the one taking pictures of these guys: 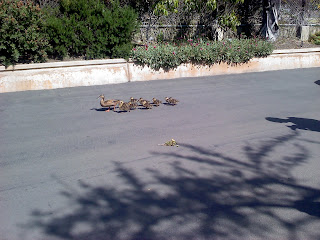 Apparently ducklings trump even the most exotic of animals.

On Sunday, we packed up some lunches and headed out to Daley Ranch for a hike; we were bound and determined to give Tilly a good run, and to bring home a dog smelling of sage. There was plenty of sage to run through. 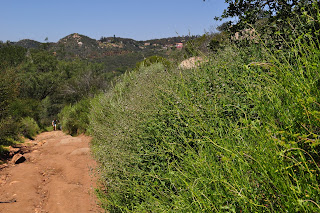 And the bees were going crazy; hiking through some of the little valleys felt like hiking through a giant humming beehive -- the sound of bees was constant, an almost inaudible vibration in our skulls. It was incredibly impressive.

We also heard a rather different buzzing sound, to our very great dismay. We stopped for lunch at one of our favorite picnic spots, where the view is absolutely amazing, just perfect for taking a break about halfway through our hike. If you click to embiggen, you can see all of the blue-eyed grass in bloom in that little notch betwen the rocks.

We enjoyed our rest and packed up to head out. Older Daughter struck out for the trail first, when buzzing erupted right underneath her feet. She jumped a mile and ran like a jackrabbit, and I saw a rattlesnake slithering right out from where she'd just stepped. I'm sure it was just as scared as she was (it probably spent the rest of its day with the vapors, telling its whole family about the person who nearly stepped on it, poor thing), and it immediately holed up under a nearby rock. We managed to get ourselves (and the dog, who was -- I'm delighted to report -- terrified) past that spot to meet up again with Older Daughter who turned to me and said, "Mama, do you have anything to stop bleeding?", and pointed to what looked like a scratch between two red spots on her leg. I said, in my best panic-is-not-useful-in-emergencies voice, "Did you get bitten?" "Oh, no" says she, "I got this scratch while we were playing around at lunch."

All's well that ends well, and when Older Daughter told us that she kept thinking about just how wrong that could have gone, we reminded her that it didn't, and that it was a good learning experience about barging through grass in the summer in California. Ten minutes later, though, Rick and I looked at each other, and he said quietly, "We had cell phone reception, and I knew exactly where we were." And I said, "My thoughts exactly." Whew.

But talk about a gorgeous hike. 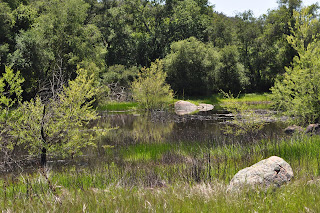 The recent rain means that there's water in places that are usually merely marshy. 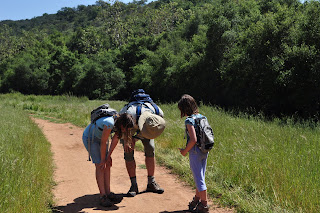 Lots of bugs to examine. 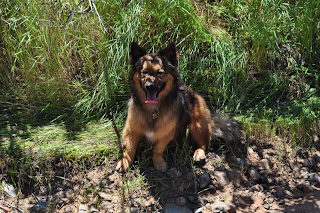 And a little bit of shade for a hot dog.

And we all got home under our own steam. It doesn't get much better than that. 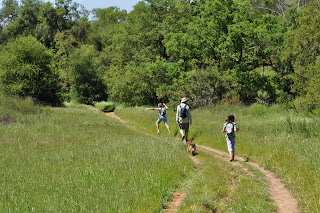 Posted by Knitting Linguist at 6:58 PM

I bet that kept you awake for a bit. Scary. But looks like a lovely weekend otherwise.

I so love the train...and farmers' markets and the San Diego Zoo...and lovely hikes...and even snakes! Glad that one did NOT bite, and that you had such a nice weekend. (Except for the well drilling gone off plan!)

You can't help but think about the what if's. Looks like a beautiful walk

What a wonderful weekend! I think we can forgive you for not blogging! ;-)

As you so perfectly illustrate, sometimes the what if's make the what are's even better.

What a scary moment! We do have a rattlesnake species here, but they are extremely rare. When I was working for a newspaper, I went on a hunt for them with a local conservationist, but she wouldnt let me anywhere near the bog where they live without very high rubber boots. We never did find any.

The train is definitely the way to travel, althought I do love driving.

I think, after that scare, I'd have had to have a lie-down, hon...but thank heavens both of you are cool-headed! Snakes {shudder}.
But oh, I so envy you the train. I love love love train travel!

(hope that sock pattern is available to us non-club members soon!)
(((hugs)))

Whew! That was a close encounter! We saw several rattlesnakes in Anza Borrego and a ranger told us that a lot of the snakes have stopped "buzzing" because people would mess with them MORE once they knew where the snakes were. Which is a very bad thing. I'm so glad your girl didn't get bit! (A copperhead bit me once while backpacking, but it was a dry bite, so I was very lucky).

Wow. Having had a friend's little kid pick up a baby rattler during a picnic in the hills and show it off to his buddies, as soon as I read about the other buzzing, I was holding my breath. Wow. I'm so glad she's okay!!! Wow.

And a condor--someday I hope to see one... Your bus description is too funny.

What a wonderful way to spend the weekend! Even the snake story...because there's a happy ending. That story will be told for many years to come.

We walked at Lake Chabot. Lots of pretty poison oak. Lots of people. No rattlesnakes seen or heard.

Oh, I love train rides! It's so satisfying to be able to sit and read and all the time, be going towards where you mean to be going.

Yikes, rattlesnake! We only have the one rattlesnake (the massasauga) around here. They're pretty rare. I've never seen one, and I'm glad, because Ajax loves to chase snakes!

Couldn't breathe there for a few minutes for your daughter (and for you). So glad everything turned out okay and all's well in your world.

Oh my...love the story of the hike, but that was definitely a scary moment! I've often thought about how easy it is to be without cell phone reception without knowing it, especially when out traipsing around in the woods where accidents can happen. I'm glad that you had it, but even more glad that you didn't need it!