It's spring, and a young woman's fancy turns to thoughts of soccer.

Yup, spring soccer (non-competitive, neither of the girls has gone to the competitive leagues) has started, and Older Daughter is back on the fake turf. 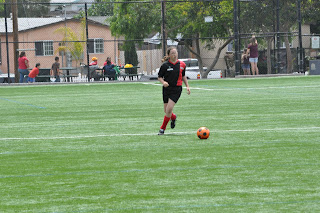 Yes, fake turf. For some reason, one of the parks in my town put in a field with fake turf, and that's the spring soccer field. I'm not fond of it, I have to admit: it smells funny (especially when it's wet), and on really sunny days, the field gets so hot that the kids can't take a knee when someone gets hurt, because it burns their knees (they hunker instead). (I've heard the refs complaining about their feet getting too hot during the games, too.) Nevertheless, it's good to be watching her play again, especially since after this year, she'll be too old for this group.

The spring league is particularly interesting because, being small and non-competitive, they play co-ed teams. This year, Rick's calling our defense The Wall of Women; all three of the main defenders (including Older Daughter and a girl who was on her fall team) are girls. And they play a physical game. Given the age range, it shouldn't be surprising that the defense is girls who have had their growth spurts (the fastest offensive players are often the girls who have not); the tallest girls are generally much taller than the boys. So Saturdays are busy again, except on those days (like tomorrow) when we're playing at 8:00 (have to be on the field by 7:30 am), which means that by the time we're done, most normal people are just finishing their Saturday morning coffee.

Spring is showing up in other places, too. It poured off and on all week, and snow levels dropped to about 3,000 feet; yesterday on Palomar Mountain, it was about 27 degrees. And this morning, when I didn't go to the pool to swim, it was 47 degrees. Now it's 63. (Don't worry, I got my exercise in by taking Tilly for the long walk she missed during the rain.) Where'd the sun go? But the mix of sun, then rain, then sun is certainly making the flowers happy. 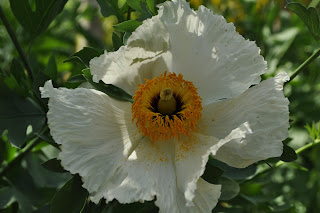 Matilija poppies. Or, as they're known around here, Fried Egg Flowers. 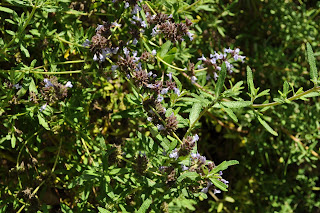 Sage (my favorite; Tilly always smells so good when we can get her out to the hills to run). 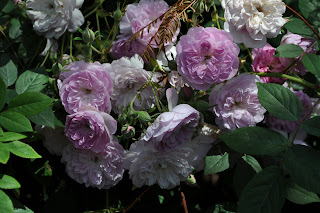 The climbing roses smell wonderful, too. And the orange blossoms are out, which means that the entire neighborhood is filled with their scent; I love driving around with my windows open this time of year. 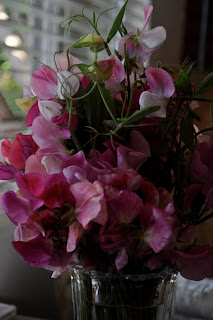 It's sweet pea season, too. Sweet peas are among my very favorite flowers, and I wait eagerly every year for their brief season, so I can buy bunches and bunches at the farmer's market. This particular bunch matches my finished Damson. 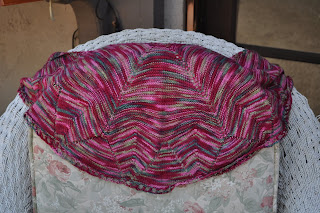 I don't know if I mentioned that this week I had to cancel my field methods class. The reason? A volcano was erupting in Iceland.* Talk about something I never thought I'd have to write in an email to students, but our Bengali speaker was stuck overseas, and couldn't get home to class. And since I don't speak Bengali, it's not like I was able to stand in. But it definitely clinched in my mind the idea that had been brewing there that she needs to end up with this shawl; this semester just wouldn't have been the same without her.

*I have, as you might expect, heard many an excuse for missing class. An Icelandic volcano is certainly one of the better ones. But the best to my mind is still the time that one of my students, a very sincere young man who was a quiet and excellent student, came up to me to tell me that he might not be in my next class because his sow was due to throw her litter, and if she started that night, he probably wouldn't be free to come to campus. I gave it to him. It just appealed to everything in my nature: first, no pregnant female of any species should be stuck going through labor without her support person available to her, and second, if he was making it up, he got full points for creativity. A year later, he took my gender and language class, and cemented his place in my heart during a discussion of the social construction of expectations of potentially attractive mates when he said that he had rather different expectations than the ones his classmates were coming up with: he was looking for a woman who wouldn't mind if he came in from the fields with lanolin on his hands, and who'd be willing to get on in there and lend a hand during lambing season. Man, do I miss that student.
Posted by Knitting Linguist at 3:03 PM

That pig guy sounds awesome! And if I was single I'd be asking if you still had his contact info!

Love the flowers, especially the sweet peas! They remind me of being a kid. I should plant some this year!

Obviously you were already married or you've have landed the guy yourself right? LAMBS? FREE WOOL?
:)
What a great story.

And I love the Icelandic volcano excuse.

Great story about the pig and lamb guy! That's gotta be the best excuse I've ever heard, way better than anything the Professor has gotten so far.

Fake turf? Yuck. One of my neighbors has fake lawn. Since we have lots of bunnies hopping around here (and dogs), well, I don't think it's such a great idea to have fake lawn just for the sanitation purposes.

You're right, that shawl needs to go home with your helper. Perfect!

Oh, and the reason you didn't know I had a knitting blog is cuz it's new and I hadn't announced it until today. :)

(Did you used to go to the lys Yarning for You? I met the owner's cousin today.)

We even had some of the ash falling here. Seemed so strange that something happening far away was having such an impact here

The shawl looks great, and having a volcano erupt is a great excuse for missing class. Older daughter looks good too.

I've been on a bit of a shawl kick myself. I just made a multnomah out of socks that rock for Kevin's mom for mother's day.

I'm also trying to start blogging again. I'm also in grad school again, so it's about once a week, but I am writing.

When I worked in a museum, one of the natural history curators rang me one day and said he needed to cancel a meeting because someone was bringing him a killer whale. 'Is that OK?' he said.

Oh the flowers! Right now I can smell wafts of wisteria and honeysuckle as I walk around town, which is even more magnificent when you can't see the flowers, only smell them wafting over a wall. It always makes me think of the book, the secret garden, which I adored when I was a kid.

Roses are the same way when they bloom, I'm actually afraid we're going to miss the roses b/c we'll be in belgium when they usually bloom, but maybe they'll be early like everything else.

So many good things in this post - sweet peas, volcanos, shawls, births. Best is the idea of running a pup through herbal fields to scent them - I love the idea.

I went to a poetry reading last night by an Irish poet who repeated some current Volcano jokes, since he managed to get to the US just in time. He spoke briefly on Irish English and the use of the conditional which comes from the Irish language. Very interesting, not to mention great poems. Oh sweet peas, my farmers market will have some next month, I think. The smells right now are heavenly. Lilacs soon.

Oh, I love your Damson. I've always loved sweet peas, but I just can't grow them. They're so pretty. What perfect match.

Your Damson was the perfect punctuation for the flower pictures...I felt like they led right up to it...beautiful!

Whenever I see kids the age of OD on the soccer field I am transported to the height of my son's soccer playing days and how much he loved it. Thanks for that memory!

And I laughed reading that young man's story...made me love his nature and yet think of Dwight Schrute from "The Office" at the same time!

Yep, it's the reason to beat all excuses!

I love the story about your farming student. I assume he's a farmer if he keeps a sow and sheep.

Shush don't tell but damson is my secret project. I think it might just be a good thank you. And that is one of the best-excuse me Miss lines I've ever heard. I miss him and he wasn't even my student

What a great student you had- the farmer one!

The whole country has been closed due to the Icelandic volcano...hubby came home from China on one of the last planes late Wednesday(nearly two weeks ago), and Older Son has been to England with the schoolship he's on to fetch stranded travelleres! The ship had two trips from Norway to England/Scotland, the second one was mainly to get oilrig workers back home...

Here we use fake turf because footballfields(soccerfields) with proper grass often gets soaking wet and turns into mudfields! But then we don't get those hot days either!

I hate the fake turf grass bits stuck in all the socks - kiddo's, mine... I think we're not doing soccer this year. He seems happier ice skating, working towards speed skating.

(I'm with everybody else - who can beat a volcano? Though the killer whale is pretty good too.)

I thought, before I even read it, how much that shawl matched those sweetpeas. Beautiful!

And that student sounds like a peach. I'm noting that he chose to take a second class from you.

Oh-how I envy you with the girls' soccer games. Your post reminded me of how much I miss watching my son play. (He played from preschool thru most of college.) Those artificial turf fields can be both a blessing and a curse. Up here in the Bay Area, they sure beat playing in the quagmire that our overused fields become before the fall season is even over. On the other hand, they ate right thru my son's goalie pants, skin, and even his gloves on more than one occasion.

Gina in the SF Bay Area

So glad that OD is enjoying her soccer season! I think it's a really good thing for boys and girls to play together while the girls still have a bit of an advantage...helps both sides to see that dominance is all relative, and that teamwork is really more important.

It's great to have those students, isn't it? Sounds like the kind of person you'd really want to know.

The shawl looks just like those flowers! They're both beautiful, and I'm sure your helper will love it. I have to say, too, that a volcano is a pretty darned good excuse. =)